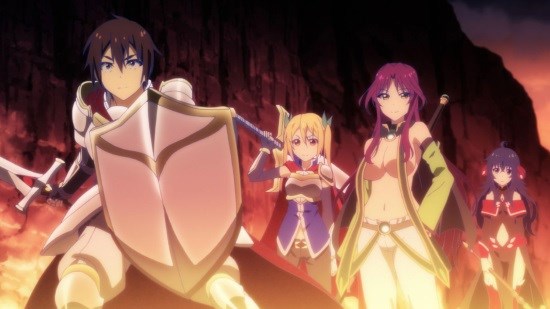 And You Thought There is Never a Girl Online

Okay folks. Time for some real talk. Gather round, because I got a confession to make and it might surprise you.

I adore love stories. Whether it's in my anime or my video games, I love that warm tingling that a good romance gives me, particularly when it has a touch of the comedic to it. So when I found And You Thought There Was Never a Girl Online? on my viewing schedule, I was intrigued. It managed to hit quite a few buttons for me.

And You Thought There Was Never A Girl Online? (which I will henceforth refer to as NAGO because I’ve got a word count to work to here) is about a group of players in an online roleplaying game called Legendary Age who, having become friends and formed a guild in the game, decide to meet up for the first time. The main character, Hideki, openly assumes that all of his guildmates are really male offline, even his in-game wife, Ako. However, he is shocked to find out that each one is not just female but also very attractive and students at his school. What are the odds, right? (In anime? Pretty good I'd say - Ed)

The plot centres around the relationship between the rest of the guild and Ako, who is largely a recluse who misses more school than she actually attends, proving unable to differentiate between the fantasy world they inhabit in Legendary Age and the fantasy world where a group of random online players are all the same age and attend the same school (also known as The Real World in this show). She routinely refers to her friends as their online avatars, much to the annoyance of Akane, who tries desperately to hide her love of gaming from her classmates. In particular, Ako truly believes that she and Hideki are married both in the game and in real life, causing no shortage of hilarity and misunderstandings.

At its core, NAGO is about Hideko’s growing feelings for Ako, who is both sweet and annoying in equal measure, and his attempts to help her become more comfortable in the real world rather than the one they share online. Her progress is surprisingly well presented over the course of the show. She often takes two steps forward and one step back and by the end it is largely considered a victory that she simply attends school more regularly than she did before making offline friends.

The cast is largely limited to the four main characters and their teacher, Saito, who also plays the same game as her students - seriously, is there anyone at this school how isn’t in Legendary Age? (This seems rather prophetic given the current rise of school played Fortnite - Ed)  - and happens to have a significant following online as her persona, Nekohime. Saito is played by the always delightful Monica Rial in the English dub, who appears to be having the time of her life switching between the stern school teacher role and the adorable catgirl persona she plays online (I have already submitted a request to Funimation to have all of Rial’s future dialogue rewritten into cat-puns). Ako’s bubbly enthusiasm mixed with mild psychosis is also handled remarkably well by Trina Nishimura, giving life to a character who could have fallen flat if not handled right. These highlights in a well rounded cast bring a great comedic energy and timing to the show, ensuring that the tender moments are touching, punctuating them with high energy laughs.

The animation is smooth and fun to watch, with the battle scenes in the game having the right level of motion and chaos. The character designs are simple but effective, with everyone looking distinct and recognizable. The sound and music fit both the slice of life and MMO genres, giving both an original feel. All in all, while the production values certainly aren’t extraordinary, they fit with the feel and tone of the show well. I would say that it feels simple without feeling cheap.

So is it recommendable? Absolutely. For the gamers, there are plenty of references to classic online games and JRPGs to spot, some of them more subtle than others. For fans of romance and slice of life comedies, it has a sweet core brought to life by a solid and experienced cast. At times it touches upon serious issues such as depression and isolation and the difficult task of masquerading as a functional member of society, while still managing to be laugh out loud funny in the same episode, straddling that line with delicate skill. While the DVD release doesn’t have much in the way of special features beyond the option to switch between the English and Japanese Audio tracks, And You Thought There Was Never a Girl Online? is a fun addition to any anime collection.