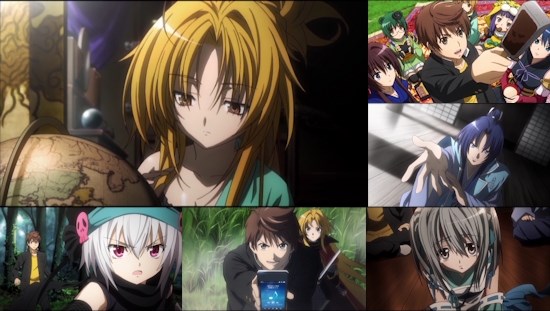 Thanks to its overuse in recent years, any appearance of the concept of "Sengoku era characters as cute girls" has brought nothing but disdain and eye-rolling, with this particular premise serving as something of a poster child for lazy, unimaginative story-telling in anime, manga and light novels. However, is it unfair to tar all of these shows with the same brush? This year has allowed us to consider this question more fully in the UK, with MVM Entertainment's recent release of Battle Girls: Time Paradox now accompanied by this new release - The Ambition of Oda Nobuna.

This light novel adaptation begins its story by throwing us slap-bang into the midst of battle in Sengoku era Japan, where a modern-day high school boy named Sagara Yoshiharu finds himself bearing witness to the death of Toyotomi Hideyoshi. However, Sagara is less concerned about the fact that he too may be about to meet the same fate, and is more worried about its historical consequences, for Yoshiharu also happens to be an expert in the period... not from reading books mind you, but from playing video games centred around the era.

However, this is no normal Sengoku period that our protagonist has been thrown into; rather, it's one with some very notable differences, not least the existence of "princess warriors" who take up arms to fight in the struggles engulfing the troubled nature. At the forefront of these struggles is... no, not Oda Nobunaga, but Oda Nobuna, a beautiful blonde girl who is treated as the black sheep of her family but is nonetheless rising in power with her skill and sheer force of will to become a prominent player in this world.

Having had his life saved by Nobuna, Sagara - nicknamed "Monkey" by Nobuna and company as a play on his name - proves his worth by using his knowledge of Sengoku period history to guide her towards her goal of unifying Japan while also taking liberties to ensure that some of the more troublesome moments of that history are altered favourably for Nobuna and her growing band of supporters. However, are these changes liable to throw the era's history out of whack to such an extent that Sagara's influence might wane?

The result of all of this is a show that is a curious blend of historical fact and utter fiction, made marketable towards its audience by a growing bevvy of girls, all of whom have some admittedly nice character designs and easily identifiably character traits, coupled with (of course) a growing love and admiration for our protagonist. Although this sounds like the first step down a path towards lots of fan service and harem shenanigans, The Ambition of Oda Nobuna proves to be surprisingly restrained in this regard - don't get me wrong, you'll see girls baring plenty of flesh and flinging themselves at Yoshiharu on occasion, but not to the point of being a distraction or impedance to the rest of the show's story and outlook.

Also a relief here is that Yoshiharu himself is, shockingly, a good protagonist for the most part - sure, he's obsessed with boobs and referring to "events" in a video game context, but he's a strong-willed individual who is willing to stick up for himself or his beliefs but without becoming insufferable or without flaws of this own in the process, leaving us with a well-rounded and believable character. The same can also be said of Nobuna, who is balanced well between her hard-nosed and combative outlook and a softer centre that the show pulls off well.

All of this adds to a show which walks the tightrope quite nicely between fact and fiction - it isn't a slave to history, but still at least feels like it has some respect for the era, although if you're an expert in the period then you might well have a different take on matters I suppose. The result is entertaining to watch and takes some surprisingly dark turns late in the series, before leading into what seems to be a very clear sequel hook that I doubt we'll ever see followed up - it certainly isn't a tour de force of action, and indeed tries to avoid action scenes whenever possible to protect its precious (and doubtless very small) budget, but it can turn in a decent combat scene from time to time and it's the show's character interactions which make it fun to watch above all else.

To be clear, The Ambition of Oda Nobuna isn't a fantastic series - it's passable in most regards and isn't particularly memorable save for one or two moments - but it's more enjoyable than it probably has any right to be. The show does tend to assume a reasonable knowledge of the events that the series portrays, twists and fictionalises, but even without a degree in the history of the period you won't be left floundering too much, and its overall story arc across the course of the series is a satisfying one. Add to that some decent characters and a reasonably solid sense of humour, and you have a show that won't be troubling any "anime of the year" discussions but is regardless a solid work of entertainment.

From a technical standpoint, we have no issues with the presentation of MVM Entertainment's UK release of the series - our DVD review copy looked fine given the format in question (and no doubt it'll look a whole lot better on Blu-ray), subtitles are all present and correct with only a few minor grammatical errors cropping up, and the English dub is pretty passable even if it can't hold a candle to the original Japanese voice cast. There are no extras at all here - not even text-free credits - but then again this isn't a show that you'll be clamouring for an in-depth "making of" anyhow.

I will confess that I came to watch The Ambition of Oda Nobuna with just one expectation of it - that it was going to be terrible, to the point where I was all but sat ready to watch the show with a dictionary of invectives at my side. It's perhaps in comparison to this assumption that the show would be irredeemably bad that I've come away from the experience feeling relatively positive about it, but even looking at the show without those expectations in place this is a pretty solid little series that avoids many of the pitfalls plunged into by its brethren. Whether that's enough to make it a worthwhile purchase on DVD or Blu-ray is a decision you'll have to make for yourself, but if you want to see what this particular genre of pseudo-historical anime is all about this seems like as good an example as any.

English and Japanese stereo audio with English subtitles. There are no extras on these discs beyond some trailers for other Australian anime releases.

7
It isn't ground-breaking, but The Ambition of Oda Nobuna is at least colourful, fun and entertaining, which is all you can really ask of a show of this nature.
LATEST REVIEWS