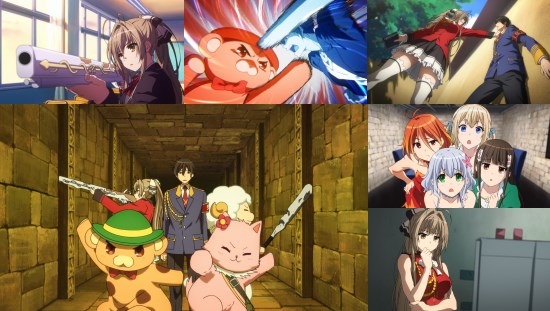 As a former childhood star and a good-looking, self-assured young man, Seiya Kanie is quite used to attracting the attention of the opposite sex. However, he's rather less used to being asked out on a date at gunpoint by a transfer student who he's never even spoken to.

Needless to say, it's hard to say no to a girl willing to point a rifle at your head (and pull the trigger to make it very clear how serious she is), and so off he sets on his date with Isuzu Sento, which sees them take in perhaps the worst theme park you could ever find. Dilapidated, run-down and dysfunctional, every element of Amagi Brilliant Park is anything but, and it's hard to imagine why anyone would visit it.

There's a method to Sento's madness however. Having learned of his past, she's looking to recruit Kanie as the new manager of the park, and what's more she has a nigh-on impossible task for him to perform as his sole duty - to ensure that half a million visitors pass through the park's gate before the end of its financial year. Failure to achieve this will result in the park's closure - a disaster for the staff of any attraction, but especially so in Amagi Brilliant Park's case, as its success is inextricably linked to the lives of its decidedly unusual employees.

For the park's mascots aren't just people in costumes - they are in fact fairies of various stripes from a place called Maple Land, where they work to attract visitors and attain the "Animus" born from those visitor's joy. Dwindling numbers means less Animus, and for the park to close could threaten the existence of Maple Land itself. No pressure, Kanie.

With its setup quickly and easily slotted into place, the focus for the series is clear - following Seiya Kanie (or, if you wanted to translate his name more literally, Kanye West) through a madcap race to reach 500,000 visitors before the end of the financial year, which sees him dealing with all kinds of unexpected issues from pirates to dragons alongside his stoic assistant Isuzu Sento (or, if you'd rather, 50 Cent - do you see the pattern emerging yet?) None of this is made any easier by the park's employees - mascot character Moffle (who you may recognise from a certain other series) takes an instantly dislike to Kanie, while other mascots Tiramie and Macaron couldn't be more different from their cute exteriors once you get to know them, as a couple of examples.

For the most part, Amagi Brilliant Park's modus operandi is pure comedy - Kanie is a one-stop shop for deadpan quips, exasperated comebacks and witty one-liners, forming a great double-act against Sento's apathy which itself plays off against the over-the-top nature of much of the rest of the cast. The gap between a cutesy cast of fairies and their grizzled, cynical worldviews occasionally threatens to outstay its welcome but never quite falls into that trap, thanks to the show finding plenty of other outlets to explore rather than constantly banging the same drum - the result is a series that is frequently laugh out loud and is ceaselessly fun to watch. There's also a soft centre in the midst of all of this - watching Kanie's hard-nosed exterior melt away alongside revelations of the growing importance of his task ensures that the viewer is taken along on its emotional ride, and if you aren't left shedding a tear or two at the climax of its main story arc then you have even Sento beaten for stoicism.

Whether its comedy or drama, all of this is aided and abetting by Kyoto Animation taking another fantastic turn on animation duties, with some smart design work bringing out the gap between cutesy outer characters and their inner personalities and imbuing the show with plenty of great slapstick or finding stand-out visual moments to lavish with attention in the midst of a show that is otherwise quite sedate by their standards. Special mention should also be given to the show's background work, which is particularly notable when it comes to depicting the run-down, ramshackle nature of the amusement park in its early episodes. Overall though, the colourful aesthetic and strong character designs make the show a joy to be hold, particularly on Blu-ray which (in our opinion) is the only worthwhile way to watch the series.

The Japanese cast for the series all fit into their roles perfectly, although the English dub cast are arguably less suitable in places - Kanie in particular simply sounds too old for someone who is still supposedly a high school student, as the most notable example. The English language treatment as a whole it competent but unspectacular, although if you're plumping for the original Japanese audio there's nothing to fault the subtitle treatment here aside from a typo or two. More broadly, the home video presentation of the series does include its bonus OVA instalment, plus a full set of text-free opening and ending credits which allows you to play spot the difference across the subtle changes to the opening animation in particular.

If you're a fan of Full Metal Panic's sillier moments, or indeed its full-blown comedy spin-off Fumoffu, then you'll find plenty to enjoy here - as you might expect, given that their source material both comes from the same author, Shoji Gatoh. Even if you've never watched that previous work, there's a good chance you'll enjoy the rich vein of comedy that runs through Amagi Brilliant Park. Watching its warts and all cast bumble through whatever events conspire to get in their way will bring you plenty of laughs and smiles, while its plot brings just enough urgency and drama to proceedings to keep it ticking all the way through to some surprisingly emotional moments. Recommending Amagi Brilliant Park is so easy it almost feels like cheating, as a suitable adjective to describe it is right there in the title.

8
Amagi Brilliant Park - The quality of its comedy is in the title.
LATEST REVIEWS