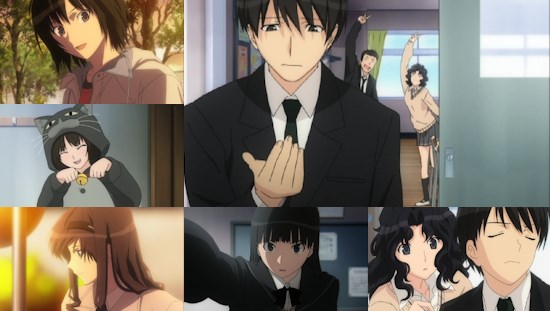 Watching any non-harem, romance-led anime series with a multitude of female can be pretty stressful at times - convention dictates that you have to pick your favourite girl and then cheer them on to emerge victorious in their battle to be loved by the protagonist. Invariably, it all ends in tears - your favourite girl is crying, you're crying... the whole thing is a mess.

Whether it's born of a desire to simply give every character their due and a decent amount of time in the spotlight, or simply to assuage the dissatisfaction at events playing out as I've just outlined in that opening paragraph, over the years we've seen a number of series take a different route towards handling its love stories, and to my mind Amagami SS is one of the prime runners amongst them. Now, after some years in the UK wilderness, the series is finally making it to the UK on home video. With over half a dozen love stories to offer, surely one of them will move our icy hearts?

Junichi Tachibana is a boy whose heart has never quite healed after being broken horribly two years previously, and on Christmas Eve no less. After the apple of his eye at that time stood him up on that all-important Christmas date, he's avoided the opposite sex and would rather spend time in the homemade planetarium which was once his closet than socialising. Still, he's not a bad kid, and given that there are no shortage of opportunities for him to bump into girls (often quite literally) as he goes about his everyday business, the possibilities of a budding romance are never far away...

Rather than throwing its half dozen or so girls into the fray and letting them duke it out for the unspectacular Junichi's affections, Amagami SS instead carves out a four episode story arc for each girl in turn (which usefully splits perfectly into the six discs of the DVD Complete Collection release reviewed here), each of which serves as a standalone story without any real cross-pollination aside from the occasional knowing aside from the series here and there.

This is where I feel duty-bound to list the girls and give you a little taste as to their characters, so here comes the boring list bit:

Add to that list two one-off OVA heroines - one who underpins the entire back story of the series, another to bask in the glory that is Junichi's little sister Miya (don't worry though, the story doesn't go there) - and you have yourself a pretty well-rounded cast of characters. Something for everyone, one might say.

Although all of these characters are broadly stereotypical - as you can probably tell just from those very brief character descriptions - Amagami SS makes them all work in a believable way. There's something very natural about the way Junichi interacts with the girls he's been friends with for some time, while the others are a journey of discovery born from accidental meetings and then slowly warming to one another. As a result, each and every relationship on show here feels organic in the way that it glows and flourishes, and it makes the whole endeavour very satisfying indeed.

Perhaps the most impressive thing that Amagami SS does it that it imbues every character with such life and charm that the idea of picking a "best girl" becomes almost impossible. Every girl is imbued with enough character and independence to be someone you can warm to and cheer on, and I can hand on heart say that I have an equal fondness for every individual as a result. Even Junichi himself is a guy who you can get behind - yes, he's a horny teenager and a complete imbecile at times, but when push comes to shove he's a good guy with his heart in the right place and you can believe in these girls falling for him far more readily than is the case in a lot of other series.

Speaking of hormonal teenage desires, Amagami SS doesn't push them to one side and instead indulges in moments of deliberately weird and silly eroticism as a cipher for teenagers wanting to explore their sexuality. It's the kind of self-aware, tongue-in-cheek fare that marks the series out from many of its peers - this is a show that deliberately throws out some incredibly clumsy character exposition then immediately calls it out, or adds a clichéd narrator for an entire story arc (complete with Junichi breaking the forth wall on occasion) just for the heck of it. There's a sense of mischievous fun that permeates the series with such daft asides at its vanguard, creating the sense that this is a show that is about entertainment first and foremost.

That isn't to say that there's no drama to be found here - Kaoru's story arc in particular does a solid job of putting across her insecurities, while the other characters all have their own issues or hang-ups that affect them to some degree or other. Such moments are used sparingly though, and it's the combination of comedy and engaging, good-natured interactions between Junichi and the rest of the cast that power the series through each story arc.

Visually, Amagami SS lives and dies by the character designs of its female cast, all of which are pleasing and distinctive. That aside, this is mostly a low budget affair - it looks decent enough and achieves everything it sets out to, although there's an obvious dip in quality later in the series as schedules get squeezed and episodes rushed out. Still, it's certainly not a bad looking show so much as an acceptable one, although even with just four episodes per DVD there are some obvious compression artefacts throughout that will leave you wanting to pick up the Blu-ray release instead.

Meanwhile there's no English dub here, so you're left in peace to enjoy the Japanese voice cast seemingly having a pretty good time with the show. Subtitles are pretty strong for the most part, with only a handful of errors or timing issues and a few translation notes here and there to boot.

Although it isn't the most side-splitting comedy you'll ever see, and even though it most certainly isn't the pinnacle of romantic drama (and nor does it want to be), there's something eminently run and likeable about Amagami SS. Perhaps it's the compartmentalised nature of its story arcs that makes it work - the lack of any kind of harem hijinks means that most of the interactions within are good-natured, and by the same token the fact that characters don't have to fight for screen time means that everyone gets plenty of opportunities to shine.

Ultimately, Amagami SS is a series that knows exactly what it is and revels in its nature with a nod and a wink to the camera, which makes for a fun journey through a handful of different relationships and characters, all of whom have something different to offer to keep things engaging. With a lovable cast to boot that you'd need a heart of ice not to warm to, the result is a silly but sweet romantic comedy series with plenty of entertainment value.