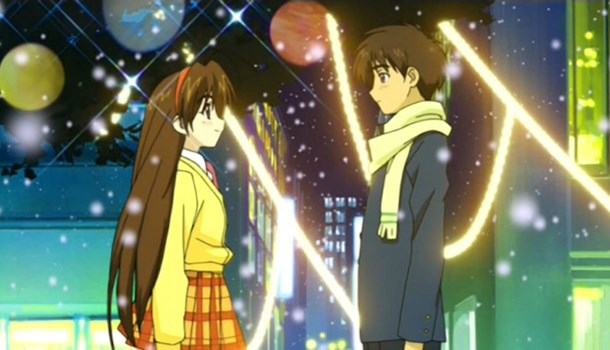 Ah, Ken Akamatsu, king of the Harem anime. In a surprising release from Manga Entertainment, one of his lesser known works makes it to the small screen in this charming romantic-comedy.

Always My Santa (or Itsudatte My Santa) is all about a young man who was unfortunate enough to be born on the 24th December, and was subsequently named "Santa" by his parents. In a twist of cruel irony, his parents then bugger off and leave him, so he spends each Christmas alone and unloved, which leads quite understandably to Santa being less than fond of the festive season.

Our story kicks off as yet another Christmas looms, but this time our hero meets a young girl called Mai, who is adamant that she's Santa Claus and insists on using her magic powers to cheer Santa up, whether he wants her to or not.

I had expected to hate this release - I'm not very fond ofLove Hina, but I do enjoy Negima, so I had a 50/50 shot that I wouldn't want to kill myself after having watched it. Guess my luck was in.

The disc only contains 2 episodes, but they're perfectly charming and somehow manage to become quite compelling. The dub's better than the usual squeaky fare, though my ears may not yet have recovered from Negima, so you may wish to watch it subbed anyway.

The character designs are pure Akamatsu, right down to Mai's "antenna". If it weren't for the odd gratuitous magical transformation sequence, panty shot and shower scene I could almost recommend it for a younger audience, but as it is, this remains a more mature title and isn't really suitable for families, which is a massive shame because it's actually very sweet and festive otherwise.

The second episode introduces a number of new characters who don't appear in the original (very short) manga, and work very well - Sharry is the perfect foil for Mai as a Santa-trainee elite, and Mai's bratty little sister MaiMai is also very funny and deserves more screentime.

Ultimately fans of rom-com should lap this up - it's an excellent shot of anime fun, and unlike the tortuously lengthy Love Hina, this manages to get everything that's good about Akamatsu bundled into a tight, enjoyable narrative. Sure, it's only an hour in length, but it's quality that counts and this is a classy gift indeed.

8
One Christmas present you might want to open early.