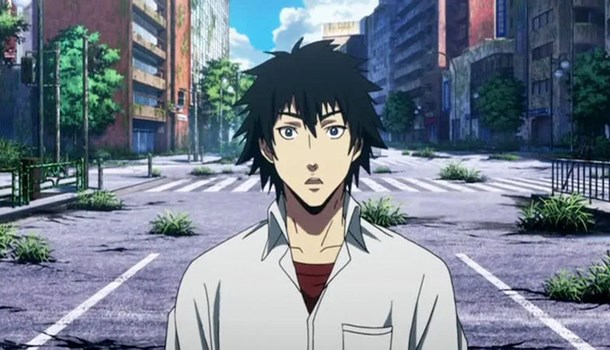 Alice in Borderland is a three episode OVA series, originally released as promotional material in 2014-2015 and came packaged with volumes of the source manga. The series follows Ryohei Arisu and two of his friends who find themselves mysteriously transported to an alternate version of Tokyo. In order to survive they must participate in various games that grant them extensions of their visa which allows them to reside in the safe zone outside the games known as the "Borderland". Each episode focuses on one game that has a different difficulty ranking and type which is shown by a playing card number and suite. The first we see is the 3 of Spades which indicates an easy game. While being billed as an easy game; there is still the notion of danger involved where the players can not only lose the game but their lives as well in the process.

The survival game premise has been quite a popular one in anime and manga for a while, with shows like Mirai Nikki and Btoom being just two  examples. This ofeels as though it would have come and gone were it not for the live action Netflix adaptation and the popularity of Squid Game. For the most part the games and survival element are handled really well, with each game taking a seemingly innocent and innocuous concept and turning it on its head by adding an element of danger. The main draw of the series is seeing the characters work to figure out the correct method to win and seeing them overcome the challenge.

The main problem here is that things are way too short and it feels quite rushed, thwarting any of the emotional impact. As mentioned earlier, this series was created as a pack-in OVA with the manga and it really shows. The three episodes feel like an advert for the manga itself and nothing more. While at times we get flashbacks to the characters lives before their current predicament, but they feel in service of adding a bit of context to their decisions or actions in a game rather than developing their character. This makes one of the climactic scenes in one of the episodes fall completely flat and generally I felt like I didn't know enough about the protagonists to care about them, so I had little reaction to the predicaments they faced.

The main thing to take away here is that this is a very short series, with three episodes clocking in around 23 minutes each. If this had been treated like a movie then there could be a lot of fun to be had with the action scenes and the general tone set by the director, but it never overcomes the feeling that it's little more than an an advert for the source material; sure, it gives the audience a glimpse at the narrative and hints at the deeper plot, but it has no substance of its own. It also ends at a really pivotal moment that changes the entire dynamic of the story, which was probably done on purpose to draw more eyes to the source material.

On a technical level, the series is a mixed bag. The animation is smooth, bright and colourful, but has that odd mid-2010s vibe of the colour being oversaturated. The character designs are also kind of ugly and go off model quite a lot. The series has an English dub produced by Sentai Filmworks that appears to be fairly recent. It's generally okay, but some characters sound bored during monologues, though conversations sound decent enough to be believable. Nothing spectacular here, but functional enough.

For what it is, Alice in Borderland does a good job of being a piece of promotional material for its manga. It introduces the world and provides a fun if hollow hour or so of entertainment. Anyone wanting something more substantial will be rather disappointed though.