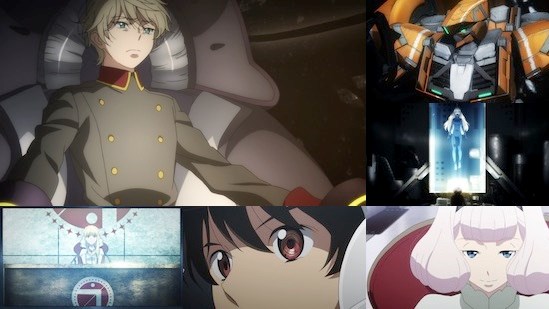 Despite all of its flaws, the one thing that can be said about the first season of Aldnoah Zero is that it kept you watching. Each episode proved more bombastic than the last, culminating in the kind of cliffhanger ending that ensured people would stick around for season two. Ending with two of your main characters presumably dead is a fairly bold move, even if it was abundantly clear that it was something that was never going to stick going forward. Now it's time to wrap things up with a further twelve episodes (episodes 13-24), brought to the UK on DVD and Collectors Edition Blu-ray once again by Anime Limited.

The story picks up 19 months later, with Princess Asseylum in a coma and Slaine climbing his way up the ranks of Vers Empire. Inaho also survived the events of the finale at the expense of his left eye, which has been replaced with a computer showing more signs of a personality than he does. The war between Earth and Mars is at its height, as Mars is led unaware of Asseylum’s fate – a fact kept under wraps by the appearance of her illegitimate sister Lemrina in disguise. Inaho however is immediately suspicious that there’s an imposter at work, and while fighting the war plans to uncover the truth behind Asseylum’s sudden turn against the Earth.

Given the increasingly dark turn events seem to have taken you might think that Aldnoah Zero has benefitted from a sudden boost in quality, displaying the suspense and intelligence that it’s always dreamed of having but never quite managed to attain. However you’d be completely mistaken in thinking this, because if anything the writing has just gotten worse. It tries its best to be deep and/or clever, but ultimately the story is held together by a series of plot twists and last-minute additions, each feeling more inexplicable than the last. The ending is the very epitome of this, throwing in a new character at the very last minute so that everything can be wrapped up in a neat little package that’s far too convenient to be satisfying.

The characters aren’t much better either. Inaho is the only one even worth mentioning on the United Forces of Earth side of things, since everyone else seems to just be there to remind the viewer (or each other) just how fantastic he is. But in reality he’s as bland as ever, only now the writers have lodged a computer in his brain as an excuse to make him even more flawless in battle. The struggles against the superior Martian Kataphrakts the first season established feel completely thrown out, as Inaho makes tide-turning manoeuvres within seconds of entering the field. The promise of his AI ally growing a life of its own screams potential, but is barely realised outside of one half-baked sequence and him having a chat to himself every now and again.

Meanwhile the Mars side of the cast is equally filled with characters that either simply don’t matter or aren’t developed enough for you to care. Asseylum only really appears at the end in order to wrap things up properly, and in her absence royal duties are taken over by Lemrina, a character the audience is supposed to immediately feel sympathy toward even though she’s barely been introduced. Slaine is about the only character worth taking an interest in as he’s the sole character driving the plot forward, but even he comes off as something of a conundrum with his constantly shifting goals depending on the current status quo.

But the most painful thing about Aldnoah Zero is just how badly it wants to be Mobile Suit Gundam, something explicitly clear right from the very beginning but even moreso in the second season. Yes it was doing the whole “Martian Independence” thing long before Iron-Blooded Orphans was on the scene, but its child prodigy protagonist, kids piloting Earth’s “ace in the hole” battleship and treacherous blonde-haired villain are parallels for too blatant to just be a coincidence. But alas Inaho is not Amuro Ray, the Decaulion is not the White Base and Slade certainly isn’t Char Aznable. The last two elements particularly feel like watered-down versions of their Gundam counterparts, with the Decaulion becoming little more than a glorified space taxi and Slade lacking the charisma to carry the series as the primary antagonist. It isn’t like Aldnoah Zero doesn’t have a hint of originality to it, but none of that seems to be placed where it mattered most – the characters.

With the story and characters crashing down around it, Aldnoah Zero’s last hope lies in its visuals, which are thankfully just as good (if not better) than the previous season. A leap into outer space conflict has done absolute wonders for the mecha battles, which are far more engaging than the already impressive land-based battles the show had to offer. Even the CG robots look excellent, blending together with the 2D animation far better than most shows do. This just goes to show that Blu-ray really is the proper way to enjoy Aldnoah Zero, so that the show’s aesthetically pleasing nature can shine through while everything else is failing.

Aldnoah Zero is a series that likes to pretend that it’s some sort of deep character-driven space opera set against a backdrop of war, but (and not through lack of trying) it really misses the mark in that regard. What it is however is an explosive, “check your brain at the door” kind of show that throws logic and development to the curb in favour of the kind of twists that probably sound great when separated from its increasingly ridiculous storyline. Its main delights lie in the fantastic visuals, and had the staff behind this realised this sooner the show could have come out far better than it actually did.

The Blu-ray Collector's Edition features special packaging as well as a booklet containing the bonus manga "Aldnoah.Zero EXTRA EPISODE", which bridges the gap between the first and second seasons.

5
Unless you specifically want something new and flashy, just watch Mobile Suit Gundam instead.