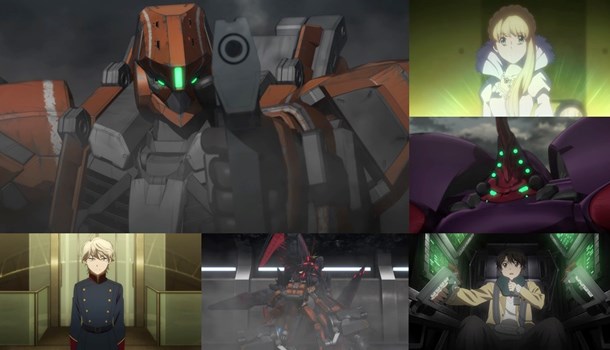 For better or for worse, Aldnoah Zero was undoubtedly one of the hotly talked about anime shows in 2014. Politically-fuelled war dramas are hardly a rarity for the mecha genre, but having essentially been built up from them a new contender is usually bound to turn heads. Now Anime Limited have released the first season (comprised of episodes 1-12) on Collector's Edition Blu-Ray, so it's time to see what all the fuss was about.

In 1969, mankind discovered an ancient alien hypergate on the surface of the moon. Using this abandoned technology, they then began to colonise Mars and found further alien technology – prompting the migrants to split from the Earth and found the Vers Empire. Vers then declared war on the Terrans (the people of Earth), resulting in a climactic battle which shattered the moon and caused its debris to come crashing down onto the Earth's surface. A ceasefire was agreed shortly afterward, with the surviving members of the Vers Army building massive space stations, cut off from their home planet.

Fast forward to 2014, where the assassination of the Martian Princess Asseylum Vers Allusia during a diplomatic visit to Earth causes the ceasefire to end and war to break out once more. Caught in the crossfire are high school student Inaho Kaizuka and his friends, who quickly have to step up in the fight against the Martian Knights. However as Asseylum is revealed to have survived the attack a deeper conspiracy is revealed, with the emergence of a third faction manipulating the conflict between the two sides for their own ends.

The first three episodes pull no punches when it comes to setting Aldnoah Zero up as a war-torn epic. This is no surprise given that they were written by none other than Gen Urobuchi (of Madoka Magica and Fate/Zero fame), a man whose nickname of “Gen the Butcher” was coined for good reason. Outside of the immediately obvious core characters it feels like no-one is safe, with casualties piling high against a backdrop of assassination plots, mecha attacks, meteor bombardments and simply having a giant space station slammed into a city. War is an ugly thing, and if the hints that the Earth hadn’t fully recovered from having pieces of the moon crash into wasn’t enough to get the point across this sure hammers it home. Aldnoah Zero makes such a strong first impression that its flaws seem almost negligible, lost amongst a setting that really draws you in and leaves you wanting more. Of course for veteran mecha fans these episodes might not quite have the same edge though, given the rather blatant borrowing of set-pieces and military tactics from the various entries in the Mobile Suit Gundam franchise. That said, Gundam’s latest offering Iron-Blooded Orphans seemed to borrow from this as well so what goes around comes around.

However, after this all-important beginning things start to come crashing down harder than the aforementioned space station, a fact that perhaps can’t be directly attributed to Urobuchi leaving the show to pursue other ventures but is certainly no coincidence. As writing duties are primarily taken over by Katsuhiko Takayama, the plot’s absurdity becomes all too clear. The political intrigue the show is based on on is only very briefly touched upon through a series of exposition dumps and badly timed flashbacks, and as the truth comes out it is swiftly pushed aside in favour of a glorified revenge plot. The individual episodes become less about consistency and more about gearing things up so that each episode can end on some sort of high note to keep viewers watching, culminating in a shock ending thats entire purpose is to utterly blindside you.

But undoubtedly Aldnoah Zero’s biggest failings are in its characters, who simply aren’t engaging or interesting enough to carry the show’s grand ideas. The worst offender here is Inaho, a character so unrelentingly dull that his only defining trait is the plot armour that somehow allows him to run rings around older and more experienced military tacticians. While shows with similarly overpowered protagonists usually have some in-show reason for their unbelievable feats, Inaho’s seems to exist simply so that the writers didn’t have to develop a believable unit of soldiers to do the fighting instead. Asseylum sadly isn’t much better, boasting more in terms of personality but ultimately feeling less of a character and more a person there to further the plot by having various bad things happen to her. Most perplexing of them all is Slaine Troyard, a Terran-turned-Martian solider that spends most of the show getting beat down only to rise out of nowhere for that bizarre season ending. There are of course some other characters with more interesting stories to tell (the daughter of the Martian assassins murdered by their own superiors right in front of her, a soldier with PTSD due to his involvement in the original conflict), but don’t expect them to do very much that doesn’t contribute to reminding the audience how wonderful the three leads are. The original Mobile Suit Gundam could get away with having a rich back story that happened almost entirely off-screen (at the time) because the strengths of the characters were enough to make it work. The same can’t be said for Aldnoah.Zero.

One area which Aldnoah.Zero does very well in though is its visuals, making it all the more a delight to behold in high-definition Blu-ray. What this series lacks in narrative and characters it tries its hardest to make up for in spectacle, constantly trying to outdo itself each episode with bigger action sequences. Some fans will likely lament the decision to blend CG vehicles with 2D animation, but for better or for worse that aesthetic seems to be here to stay and A-1 Pictures don’t do a bad job of it. Any initial distraction they cause quickly melts away in the early episodes, leaving the viewer to enjoy the action smoothly even when the series is failing elsewhere. The mecha (or Kataphracts at they’re referred to in-show) designs are unlikely to stand the test of time but are still very good, especially the stark contrast between the humanoid Earth robots and their far more alien opponents. Hiroyaki Sawano’s soundtrack is also excellent, perfectly tapping into the mood and tone of each scene and amplifying it magnificently. It’s moments like these that the viewer can just sit back, relax and enjoy this series on a purely visual level.

Aldnoah Zero is a series that aims high but never quite manages to attain that height. On a purely aesthetic level it comes highly recommended, but those looking for a war story with a bit more meat on its bones might be better off looking elsewhere. That said there is still something oddly endearing about the whole thing, and the ending is bombastic enough to leave you feeling like you want to know what happens next even with little hope that things will get any better in season two. To its credit, that’s a pretty impressive hook.

6
A Gundam wannabe with plenty of flash but sadly little bang.