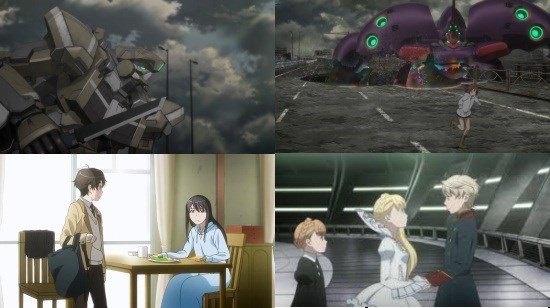 The new anime season is now well underway, so it’s high time we took a gander at one of the summer's new mecha series, specifically Aldnoah Zero. There’s no sign of any penguins around (Last season’s Daimidaler has me wanting them in all my mech shows at the moment), so we can safely assume we're in for a fairly serious sci-fi actioner here.

Welcome to an alternate version of 2014. How alternate you say? Well, mankind has developed humanoid mechs and has engaged in an interplanetary war with Mars, which is now populated by a human colony who’ve discovered some powerful alien technology that they’re all too happy to turn against their Terran cousins. An uneasy truce has sprung up since a war which occurred prior to the beginning of the series, but with Martian space stations in orbit around Earth and Earth schools teaching the fine art of mechanised combat it’s clear that it won’t take much to shatter this fragile peace. Fortunately, a visit by the Martian princess Asseylum quickly resolves matters and the disarmament can begin.

Only kidding - as you might expect things go downhill pretty quickly, and you won’t have to wait too long before colossal mecha are rampaging through cities!

This is the point where I’d normally talk to you about all the different characters, but frankly they’re such a dull bunch there’s very little to talk about. Four episodes into the series, and most of them have barely managed to produce a single character trait worth mentioning... Inaho Kazuki, who seems to be groomed as the lead here, is particularly dreadful. He has no charisma or actual personality as far as you can see; even when a classmate is killed right in front of him he barely bats an eyelid. In fact, he has so little personality of any kind that there have been more than a few people who have assumed he has some kind of mental health condition. The only thing he’s good for is coming up with plans that allow his classmates to survive encounters with the enemy, as they rush to try and evacuate to a safe zone. Admittedly these plans are actually pretty ingenious and the execution of them is fun, but frankly they could have had someone reading the plans from a manual and had the same effect.  Natsuki Hanae, who voices Inaho, could be part of the issue as a quick look through his CV shows him as being the voice of incredibly dull and boring male characters throughout a whole variety of shows (at least in Tokyo Ghoul he has an emotion, even if it is just screaming).

Next we have Princess Asseylum who, although she is being set up as the tragic heroine trying to end the conflict, is frankly (without spoiling anything) either moronic or the most evil character in the series depending on how you look at things, given that she could have stopped the whole conflict before it even starts but doesn’t because.... well, the series never really tells us, apparently hoping we’ll let that little fact go if they put enough explosions on screen. After her there’s a human living with the Martians who is clearly set up to be a rival, and then a bunch of other characters one suspects will be sidelined or killed off fairly quickly as the story progresses through its escalating conflict and the all-but-inevitable romance.

The cast aside, there are some things to like here. The set pieces, it has to be said, are brilliantly done - in particular the initial Martian assault which essentially consists of them dropping space stations from orbit on top of cities and causing massive shockwaves that destroy everything around them is spectacularly well realised. Elsewhere, the mech combat uses the fairly standard "each of the big enemies has a different ability" gimmick to be able to keep the variety going, allowing for some great tactical battles kicking off with a huge mech which can seemingly dissolve anything that touches it. Hopefully these big set piece moments will continue throughout the series, as there’s some great inventiveness and good direction here.

On the production side things are pretty much as split as they are everywhere else in the series. The character designs are fairly nondescript but have been crafted to a reasonable standard, but it’s in the mecha and action sequences that A1 Pictures have put their efforts with some detailed designs that look great and really pop on-screen, helped along by some really fluid animation. Frankly, there’s such a big difference in the overall approaches to the characters and the mecha work that it feels to some degree like someone had some amazing ideas for mecha design and action scenes, but then nobody could come up with a good story to put them in and so something was thrown together quickly as an excuse to do everything else. Given that the series was created by Gen Urobuchi, this is rather a big disappointment.

There’s just enough in Aldnoah Zero to keep you entertained by its action alone, and on that front its good enough that I can recommend you watching it solely for that. I honestly wouldn’t expect anything to come from the series in terms of character development or drama though - even with Urobuchi’s involvement there's just no foundation for them to build anything on. In short - watch with your brain switched firmly to the ‘off’ setting.

6
The series so far boasts some great action, but is disappointing overall.