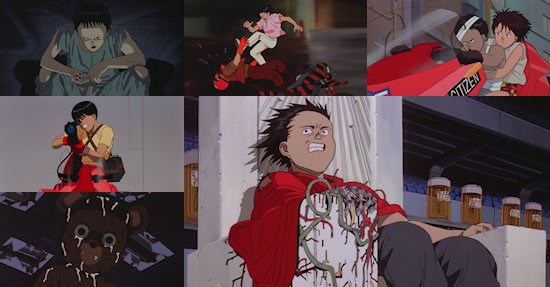 I would imagine that Katsuhiro Otomo's Akira requires little to nothing by way of an introduction - even if you've never actually seen the film or read the manga for yourself, the chances are you've at least heard its name in passing.  The reason for Akira's name living long in the memory of western anime fans in particular is a simple one - without its existence and the following that the movie gained in the west, it's quite likely that I wouldn't be sat here writing about anime right now, and you wouldn't be sat there reading about it.  In short, Akira brought the possibilities of Japanese animation into the spotlight as it headed towards its spot as a cult hit and critically acclaimed classic, paving the way for a growth of interest in anime that has endured to this day in the UK.

Thus, it's fitting that the 20th anniversary of the UK's premiere anime distributor, Manga Entertainment, should be celebrated by the release of this seminal film on Blu-Ray for the first time on our shores as Akira itself pushes towards its own 25th birthday, offering up a remastered edition that arguably brings us the movie as it was meant to be seen.

For those unfamiliar with the movie, Akira begins (albeit briefly) in what was then present-day Tokyo and a cataclysmic, seemingly nuclear explosion that kick-starts a world war.  Some thirty-one years later, Tokyo has rebuilt itself under the moniker of Neo-Tokyo, but the scars of the event from three decades previous has well and truly left its mark on a city characterised by its dangerous streets filled with unruly youths and biker gangs while its political elite either look on helplessly or dip in to the trough of corrupt money flowing through its shambolic system.

From the viewer's perspective however, it's one of the aforementioned biker gangs that serves as our entrance point to Neo-Tokyo, more specifically in the form of two friends - Kaneda and Tetsuo, a pair of teenage orphans whose circumstances has led to what could be better described as a brotherly relationship over one of mere friendship.  During one particular skirmish with a rival gang, Tetsuo is involved in an accident which sees him drawn into a world of weird and wonderful children and government sponsored experimentation on humans, all carried out in the name of understanding the explosion which brought Tokyo to its knees and controlling the power that created it.

Perhaps the first thing that a serial viewer of Akira will notice from this Blu-Ray release of the movie is that it really gives you a new appreciation of the level of detail exhibited by the film's animation - the early chase between rival biker gangs and subsequent riot scenes in particular serve as a vibrant, colourful and exquisitely detailed example of just what a treat for the eyes Akira can be, with a level of quality that you'd be hard-pressed to find bettered outside of Studio Ghibli's works in the twenty or so years since its creation.  This eye for small details like the reactions and movements of background characters, the realistic behaviour of light, smoke and so on all lends its hand admirably to giving Neo-Tokyo a realistic and organic feel - an important facet for a film that takes quite a leap of faith with some of its constructs.

It's probably the nightmarish visions that live longest in the memory after watching Akira, and these moments are certainly worthy of note in their own right - the children-cum-experimental subjects at the heart of the story are chilling in their own right, whilst the visions they can project upon others are only matched by the bloody brutality of Neo-Tokyo itself as it pulls no punches all the way through to the increasingly distressing vision of Tetsuo as he loses control of the powers activated within him against his will.

Although Akira is perhaps best remembered as being a tour de force of stunning visuals, and there can be little doubting that it was a ground-breaking effort of its time, dig a little deeper and there is a fair amount of socio-political commentary in its depiction of this post-apocalyptic world, from its more obvious eye towards self-serving politicians and the potential pitfalls of science through to the film's ever-present nuclear weapon allegories.  Its overall story might not be quite as potent as the visuals which support it (how could it ever be?), and in places it threatens to become downright confusing, but there's still enough plot and character development to create an eminently watchable and frequently fascinating movie, helped along by its action set pieces to make Akira deserving of its critical acclaim.

As we've already mentioned, the primary motivator for watching Akira on Blu-Ray is the opportunity to watch its stunning animation via a clean, crisp High Definition presentation - something which this release delivers almost without fail aside from a small amount of noise and the occasional scene which looks a little out of focus; an inevitable side effect of the remastering process that we tend to see in any remastering jobs of this kind.  Those occasional "blips" shouldn't detract from the fact that Akira on Blu-Ray looks fantastic and well worth the price of entry for anyone with an interest in the movie without question.

Equally, or perhaps even more, impressive is the film's soundtrack - a powerful component of Akira in its own right, added even more power and potency by the remastered English and Japanese Dolby TrueHD audio tracks available here.  Crisp, dynamic and powerful is the order of the day here, with excellent sound effects accompanied by Geinou Yamashirogumi's weighty, memorable soundtrack supporting proceedings perfectly.  Not only has Akira never looked so good, it's never sounded this great either, making for a film that is best served on a suitable multi-channel surround sound audio system.

The only area where we could have perhaps hoped for more is in terms of the extras on this disc, which are limited to the usual selection of trailers and storyboards - surely there are many tales to be told about the production of this film via commentaries and making of features?  Then again, this isn't something that we can blame on Manga Entertainment, as both the Japanese and US Blu-Ray releases of the film are similarly sparse in this regard, while this UK release even skips any menus and heads straight to the movie when you insert the disc with a default of English audio and subtitles disabled, which gives it a feel more akin to Japanese anime releases.

There really isn't much to say about Akira that hasn't been said already - it's a visually stunning and engaging film that is well worthy of its place as a much-heralded champion of Japanese animation.  If you've never watched the movie before then this is as good an opportunity as any to experience Akira to the fullest, and even over twenty years after its completion it still feels surprisingly fresh and relevant, ripe for investigation and enjoyment amongst a brand-new audience.  If you're an old hand who has watched Akira countless times before, then you'll still get a kick out of this superb High Definition audio and video transfer, which gives you a great excuse (if one were needed) to watch the film again and pick out new details that perhaps passed you by on previous viewings.

So, the final equation for whether you should buy Akira on Blu-Ray can simply be boiled down to a single question - do you have a Blu-Ray player?  If the answer is yes and you're an anime fan new or old, you owe it to yourself to watch Akira at least once, and this is the best possible way to do so.  Whether it's your first time watching it or your fiftieth, this new release will blow you away.

9
By turns a classic and a hugely influential work in bringing Japanese animation to the west, this High Definition remaster of Akira looks better than ever and proves that this classic film has aged exceptionally well to date.
LATEST REVIEWS