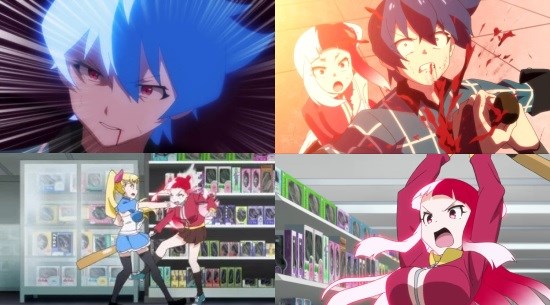 Akiba's Trip is certainly one of the wackier franchises out there at the moment. The PSP title which has spawned three spin-offs and sequels thanks to the combination of its off the wall method of vampire slaying combined with its near perfect recreation of Tokyo's Akihabara district and the broad caricatures of the people who inhabit it. There’s a lot of fun to be mined here for an anime adaptation, but can Gonzo steer things through the rocky road of game to anime translation for a show produced for their 25th anniversary?

Tamotsu is a hardcore otaku who spends all his free time desperately hunting down rare items from his favourite super-obscure show, but unfortunately things aren’t going to go to plan on his latest excursion. An attempt to save a mysterious girl with red hair he leaves him with an unfortunate case of, well, being dead. Fortunately for him Motome, the girl he saved, is a high class ‘bugged one’ and in thanks for his aid she makes him just like her, bringing him back to life with a little kiss. Now the pair must work together to save Akihabara from the wicked designs of the evil bugged ones who possess innocent people to turn them into the darkest worst versions of themselves. Together with Tamotsu’s little sister and cosplaying exhibitionist Arisa they form Electric Mayonnaise and set out to strike at the bugged ones' only weakness – being stripped of their clothes!

Oh boy, where to begin? To put it delicately Gonzo haven’t produced what I’d call a truly great show since the original season of Saki in 2009 (and they moved off production of that part-way through! - Ed.) and their 25th anniversary show sadly is not going to break that streak. Akiba’s Trip the Animation is, to be blunt, a mess. For starters you’d assume that the whole point of adapting a game would be to, y’know, adapt the game. What Gonzo and director Hiroshi Ikehata have decided to do though is to throw out the entirety of the story and characters of the games and keep only the elements of stripping people and Akihabara. This opens up two questions: First, why even bother to licence the game if that’s all you’re going to bother with? Secondly, who is this show actually for? The second question in particular is a pretty pressing one. Fans of the games are going to be upset that none of the things they love about the games are anywhere to be seen and new audiences aren’t really going to get anything out of the title.

Moving forward you have severe issues in terms of both character design, which is pretty bad across the board (when your lead heroine looks like a low-res rejected Splatoon character design there’s a problem), and in terms of the plot which is nonsensical. In the games stripping people made sense because the bad guys were vampires and died when exposed to enough sunlight, but in the anime the whole "bugged one" thing never really makes any kind of sense and doesn’t really follow the same rules from episode to episode. Why are some of them little black blobby things? Why do some of them die completely when stripped and others just change back into normal people? How do they change clothes if just being stripped kills them? The list goes on. All of this could possibly be forgiven if the series succeeded on either a fan service or comedic level but the gags universally fall flat and the fan-service is of the 90s type that these days just isn’t enough to stand on its own any more without the support of something else.

At least the production values are pretty good here though. The characters may look terrible but at least they are nicely and fluidly animated and Akihabara looks really good in most of the backgrounds as, just like in the games, if you’ve ever been to Akihabara you’ll generally know exactly where they are right down to some very prominent product placement (Maidreamin' must have had high hopes for this show). Opening and ending themes are pretty good too (though the same can’t be said for most of the music within the show – episode three had an idol concert where the idol literally sings ‘lalalalala’ in a dull monotone).

Reading all of that you may have gotten the impression that Akiba's Trip the Animation is a dull show that you shouldn’t bother watching this season, and if you did then you would be 100% correct. There’s just nothing here that I can recommend as being a reason to watch the show and frankly the game turns up in almost every PSN sale for under £20 at this point so why would you bother with this strange show that just happens to go by the same name?

You can watch Akiba's Trip The Animation in streaming form on Crunchyroll.