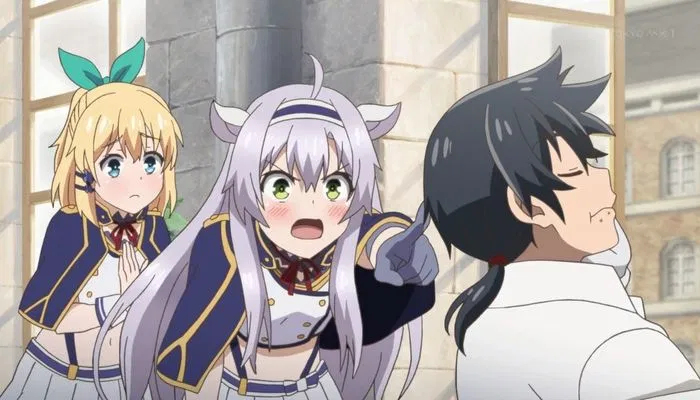 Sometimes anime can be a magical thing, shows like Shirobako, Spice and Wolf, or Ghost in the Shell: Stand Alone Complex draw you effortlessly into an incredible world of wonder and wonderful, rich characters who you could quite happily spend hour after hour with...You may have noticed that I’m waffling a bit here, that’s because I’m not here to review one of those wonderful shows. I’m here to review Akashic Records of a Bastard Instructor which is one of the worst shows I’ve seen for some time.

Sistene and Rumia are students in a school that teaches magic, they’re pretty good students and enjoy life on campus. Where they learn how to zap people with lightning bolts and use magical circles, but all that hits a nasty speed bump when their teacher takes a leave of absence. Replacing him is Glenn, a lazy and seemingly utterly incompetent man who has no redeeming qualities whatsoever. To the point where he engages in magical duels with the students and generally lies and cheats to get out of doing any actual work. Until, of course, the plot decides that it needs to have him also prove to be a super-smart, super-powerful, anti-wizard assassin.

To be honest this is a mess delivered in 25 minute chunks. There are very few redeeming qualities, and what little there simply highlights what a smart little show the series could have been. The magic system in particular is neat, and very much about how to alter and/or shorten the casting of a spell to adjust its effects. The person who can shorten it the most can cast the fastest and likely win, but the person who can tweak the spell might just have the edge and so on. It’s a nicely thought out system and the series lecture on it is well done.

Sadly, however, the series is totally inconsistent with each of its three opening episodes feeling totally at odds with each other. The first in particular, by setting up its ‘hero’ in such a way that surely no-one in the audience could root for him. The two female leads are little better, with one as the generic nice girl and the other bouncing wildly between strong-willed genius and damsel in distress as and when the story requires it. By the time the action kicks off, in the third episode, the show feels like it’s giving up on character development and comedy and switching genres into action. This sees Glenn becoming progressively more powerful throughout the episode, at every moment he’s about to lose some miracle happens, for no apparent reason, to help him survive and win. At least when shōnen shows do this there’s generally some logic behind it.

So there you have it, the show is pretty much without merit, and very much not worth your time. That’s without even talking about the ill-advised rape scene. Yet more outstanding work from the studio that brought you Schwartzesmarken and Terraformars.

You can currently watch Akashic Records of a Bastard Instructor in streaming form on Crunchyroll.

2
Some records should never be played.
COMMENT AND DISCUSS
blog comments powered by Disqus