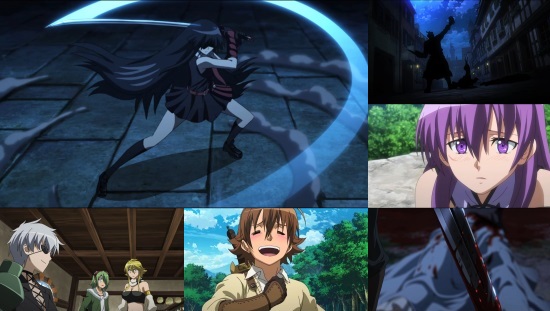 Tatsumi, a skilled swordsman, leaves his poverty stricken village in order to become a soldier in the capital. With the money and acclaim he earns from his job he hopes to be able to help his village. Unfortunately things don't go well for him when he discovers that the job he'd receive would be entry level, with little chance to earn enough money or renown in order to save his village, and things take a turn for the worse when he is swindled out of his money and left destitute. Fortunately he is taken in by a wealthy and charitable family, although this soon leads Tatsumi to discover that things are not quite as they seem within the country's capital. After seeing the horrors that the city has to offer, Tatsumi is enlisted into a revolutionary force known as Night Raid, whose job is to assassinate corrupt government officials and clean up the city in order to overthrow the power-hungry establishment. This in turn will make way for a new regime that will treat all citizens with equality.

Akame ga Kill starts things off by repeatedly showing the viewer how terrible the capital is - each episode focuses on Night Raid's missions to clean up the city, which usually culminates with a battle involving one of the group's members and the city's police force. During this time we see the atrocities committed by the people running the city, including drug trafficking, prostitution, slavery and various other illicit businesses. From this there are also scenes showing the poor living conditions of the city's lower classes, and the lengths they'll go to in order to seek out help from Night Raid. These episodes act as an introduction to the world the series takes place in - for the most part the capital gets all the focus, but there are also a few conversations detailing the government's territory expansion plans as well as some details on living conditions in towns outside the proximity of the capital.

As well as focusing on certain missions, each episode also chooses to focus on one character of Night Raid at a time. This is mainly achieved through Tatsumi having each member instruct him - during this time each member divulges a few details about themselves, mostly pertaining to their back story and motivations for fighting against the government. This also gives each situation two different perspectives, one from the established member of Night Raid and the other from Tatsumi who is experiencing things for the first time. While this type of set up works to establish each character, the main problem with this is that Akame ga Kill introduced too many characters to begin with - at this point some of the characters have not had nearly the same levels of attention as others. It also leads to some points where the enjoyment of an episode is based around how much the viewer likes a member of Night Raid, although luckily alongside the introduction of each character there is also the development of Tatsumi's character that goes along with it.

At first, Tatsumi begins as your stereotypical happy-go-lucky protagonist with a rather idealised yet naive view of the world. However, through the events he witnesses, he starts to realise how awful people are and how terrible the world is - this in turn leads to moments where Tatsumi says something incredibly stupid, only to quickly be reprimanded for how ignorant he is. Most of the time when this happens it leads the way to more back story about one of the Night Raid members, and acts as set-up for a mission pertaining to the topic under discussion. Each mission that the characters participate in usually revolves around assassinating an official and breaking up some kind of trade - while at first the enemies that the main characters face are weak and defenceless, as time goes on the series introduces quite a few formidable opponents thanks to the special weapons that each character possesses.

Action scenes themselves are a mixed bag, where members of Night Raid will dominate normal soldiers as villains do the same to ordinary civilians. However, once a fight breaks out between characters who possess the series' special weapons, things start to get interesting. The weapons in question are known as “imperial arms” - each one has unique attacks that have certain conditions to their use. Prominent examples are a gun that one of the Night Raid members carries whose firepower is proportional to how much danger the user is in, while another member carries a sword that instantly poisons and kills anyone who has been cut by it. While powerful, the weapons in the series also have their own drawbacks, which characters in the show overcome by adapting specific fighting styles. The fight scenes in Akame ga Kill between imperial arms users get really violent and bloody; filled with large amounts of blood, gore and flashy moves.

As well as the violence shown in these action scenes, there are quite the number of disturbing themes and scenes scattered throughout the series. As mentioned earlier, most of the officials deal in illicit business practices - drug use and the sex trade is shown, along with torture and violent acts of murder in gruesome detail. While a bit excessive at times, the tone the series takes with this really complements it and fits rather well. However during times when the atrocities of the city are not shown and the series focuses on Night Raid during their free time, things feel very uneven - the series tries to add in some comedic character interactions and situations that feel out of place and don't really work all that well in the grand scheme of things. The problem with these scenes is that they involve characters that are still being introduced and developed, and the resulting swerve in tone is quite severe - one particular example has one character talk about their past as a murderer, yet also has a scene of them tripping up and searching for their glasses like Velma from Scooby Doo. While not a huge detractor from the enjoyment of the series, it feels like superfluous material taking away focus from the main attraction.

Akame ga Kill, then, is at it's best when showing action scenes and the harsh reality of the city the series takes place in. However, when things start to focus on characters and comedy is where it falters. The characters, while still developing, haven't yet reached a level where we can really take an interest in anyone individually, and the comedy scenes fall flat and feel rather out of place. Overall though, the good points outweigh the negative ones to deliver an interesting if brutal series.

You can currently watch Akame ga Kill! in streaming form on Crunchyroll.

7
Brutal, action-packed and cool when it wants to be; it just needs to work on its characters and ditch the comedy.
COMMENT AND DISCUSS
blog comments powered by Disqus