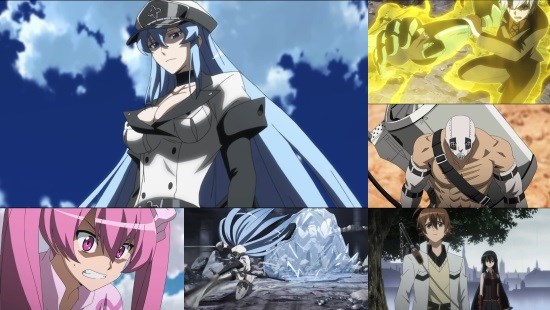 Night Raid's campaign against the tyranny and corruption of the capital continues towards its climax as the group of assassins battle against the special task force that stands between them and their final goal of liberating the country from it's oppressive rule, thus leading the way for the revolutionary army to take over and bring peace to the country.

As Akame ga Kill's second half starts out we're treated to a small respite from the battle between Night Raid and the Jaegers (the aforementioned special task force) in order to deal with a new threat to the capital which both sides need to contend with, as monsters have appeared that are eating people indiscriminatingly. During this time things take a slightly lighter tone amongst the characters of the show, as new characters have been introduced to the team recently. Most of the interactions between the established characters are based around determining the best way interact with the newcomers and how best to integrate them into the fold. Here there are a few comedic moments to help the viewer get to know some of the character's quirks and showcases the series style of humour. Whilst feeling out of place at times due to how lacking this aspect of the show is compared to the dark tone and violent action, these scenes act as a nice breather which can lead the way into more serious matters. Within these first few episodes of this half, Tatsumi is trapped with the leader of the Jaegers – Esdeath – who has an unrequited love for him. Thanks to this, Tatsumi discovers that the Jaeger's leader cannot be reasoned with and realises that their final confrontation will not end well for both sides involved.

After this brief interlude from the assault on the capital, things return to business as usual for Night Raid as they work on assassination targets to achieve their overall goal. Things are then taken up a notch with the increased threats and challenges they face in order to achieve their ultimate goal of bringing down the corrupt empire. An all-out battle against the Jaegers ensues, resulting in some surprising and shocking twists and turns. As each side is comprised of highly skilled combatants the battles in question are action-packed encounters that shows the violent and bloody action in extreme detail. As the series progresses things become more violent and the death toll rises, which in turn leads to some people's biggest point of contention for the series - for many this escalation in violence, action and death can be seen as a cheap tactic employed for shock value purposes. There's also is a feeling that as the series progresses to its end most of the deaths lose impact as the pace quickens to hurry along towards a conclusion. Whilst the characters only reflecting on their losses in the briefest of scenes during the breaks in action may seem like a sore point, in a way it works as the series shows characters don't have the time any more to reflect on things, with a need to focus their attention on dealing with the task at hand.

Whilst characters don't get enough time to reflect as the series draws to a close there are enough character moments and bits of back story to give the audience the information they need to developments to have an impact, yet just not enough to carry enough emotional weight to give meaning to these occurrences. Whilst this may be a detractor for some, the whole concept and handling of this ties in well with the themes that Akame Ga Kill has set for itself. This pain, loss and sense of unfairness really highlights how terrible the world and system is in the series, which in turns gives more incentive for characters to move on and change things for the better. All this gives Akame Ga Kill's second half quite a snappy pace where a lot of things are happening each episode with action to match. Whilst some characters really need to have been given more screen time to develop, overall the characters in question were given enough attention to fulfil the main requirements of the plot.

Following on from my thoughts on part one's release, Akame Ga Kill part two also contains the same set of audio and subtitling option: an English language dub in 5.1 with a audio descriptive subtitle track that uses the dub track's script, along with Japanese stereo audio and an English subtitle track that translates the original language version. Again, these features - while being a bit special for this release - feel like they should be the standard for anime releases going forward, giving the consumer more choice in how they are able to view the content. Also as stated previously the dub is by Sentai Filmworks, and as I stated in my review of the first half that this series is probably their best dub. My opinion has not changed during this second half of the series - the writing is still excellent, the script and voice work are really well-handled and the series was just as enjoyable in both language versions. This is a series that has had a lot of effort into and it clearly shows.

With all this being said Akame ga Kill's second half and conclusion ends on a satisfying one. A bloody, dark fantasy with a lot of shock value and action for those who like mature themes to go with their action, this is a release that is also well produced and handled by its western distributors.

8
A bloody, satisfying end to an action-packed dark fantasy