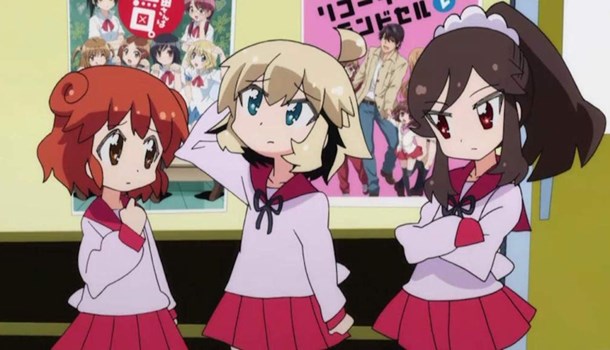 Ai-Mai-Mi is one of this season’s tiny three-minute comedy series, and given its diminutive length I thought it would be worth a shot. This form has delivered both great and utterly dire experiences before, so where does this new show come in?

Ai-Mai-Mi stars three high school girls with the same names as the title who are members of a manga club who get up to crazy hijinks. That’s pretty much all the setup that exists, as everything else that happens in the show is too bizarre to boil down into an introductory paragraph.

Ai-Mai-Mi is utterly bonkers, and I love it. It doesn’t care what you think, or what you believe conventions should be for art, decency, and comedy - instead it does it’s own, utterly off the wall thing. Not all of it is original, not all of it is actually funny, and not all of it is even a good idea, but it moves along at such an insane pace that you barely have the time to register it and have it bother you.

The art in particular is a delight, mostly because it is an utter mess. Perspective is often non-existent, backgrounds and objects are all a-skew most of the time, and the art style and level of detail flips around from scene to scene with wild abandon. This is especially true of the characters, whose eyes oscillate from large to massive in different shots, and whose hair highlights are so bizarrely applied that it makes fun of the omni-present hair highlighting that is present in every anime.
This could be seen as a sign that the studio was scraping the bottom of the barrel and this may very well be the case here as well but it has also given rise to this insane creativity and unbounded enthusiasm that leaks out of the screen. It feels too intentional and gleeful to be just an accident.

The sheer madcap exuberance in the show is a lot of what draws me to the show and is perfectly suited for the three minute format. Much longer than that and some elements would get tiring; for example one of the repeating opening scenes which has an animated low-detail puking girl superimposed over a live-action backdrop while a narrator speed-reads a description of a depressing hypothetical situation.

The main “storylines” of the various episodes are great as well, being as nuts as the art style. Despite being set in a high school club with a trio of girls, the show manages to nicely sidestep the normal situations that such casts and settings end up playing out - instead you have storylines where one of the cast gets a tank-like cyborg body so they can be better at drawing and out-art a bully who accosts them on the way home. Or how someone with maximum courage gets their kicks. It's all played perfectly straight and without any hint of irony or winking at the camera, which just heightens the comedy. Each episode I would find myself being mystified by whatever was going on before devolving into a laughing wreck. It got so bad during episode two that my laptop fell right off of my legs and onto the floor... whoops.

Most of the background music is merely accent to the rest of the nonsense occurring, but the ending song goes into overdrive which perfectly matches the 8-bit era faux-NES visuals which fly at the screen at a rate of knots. It feels like an honest love-letter to the games it is parodying, squashed down into just thirty seconds of rapid-fire gags and insane singing.

I really didn’t expect anything when I started watching Ai-Mai-Mi, and this made the frothing craziness that I uncovered all the pleasantly surprising. It won’t be everyone's cup of tea, admittedly, but I found it to be a refreshing change of pace and had an absolute blast watching it. It’s only three minutes long an episode, and you may be pleasantly surprised.

You can currently watch Ai-Mai-Mi in streaming form via Crunchyroll.