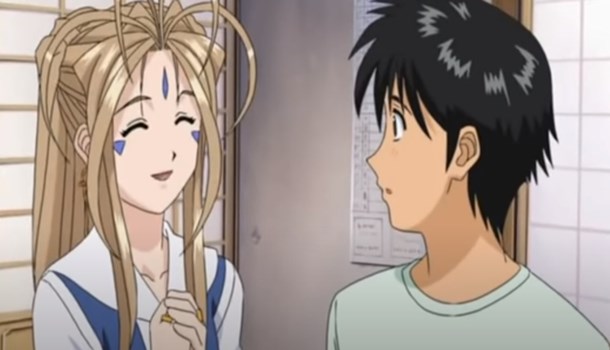 After the already frantic escapade that was the first volume, I had a secret hope for the series to perhaps settle down a bit... boy was I wrong, and delightfully so!

This volume sees the introduction of two very important characters who will both do their part in making Keiichi’s life more difficult (read interesting). We meet the sarcastic, cynical and absolutely lovely Megumi who is Keiichi’s younger sister. In addition to this we meet the first member of Belldandy’s family, her elder sister Urd. This little combination of characters adds enough spice for the pace to be cranked up a notch.

The volume begins with Keiichi discovering his sister is looking for a place to live locally to Keiichi for university. Her specification for an apartment ends up being overly optimistic and in true goddess fashion, Belldandy offers to help while dragging Keiichi along for the ride. Eventually she finds somewhere and all is well, almost. During the course of the search it becomes apparent that there is something wrong with Belldandy, as we learn later in episode 2 the contract between Keiichi and her is causing the almighty system force to crash and this embodies itself in Belldandy... as sneezes. Unfortunately for the couple, this crash rouses Urd to come down from heaven (and the helm of the Goddess system), to Earth and meddle. This is where life gets just a little more interesting...

Urd is no walkover. Unlike her younger sister she is much more of a dominant character and takes it upon herself to "fix" Keiichi so that his relationship with Belldandy will be more... physical. Add mind control, nose bleeds, the need for an actual physical kiss (which ironically enough was the cause of all this mess in the first place) and the constant threat of large goddess breasts being thrust into his face, and Keiichi ends up being pretty miserable. This is the point where I begin to hate him... just a little.

During all of this drama the other characters from the show, Sayoko (the human who wants Keiichi and sees Belldandy as her rival) and her new accomplice, the rich jerk Aoshima, put forward a series of plans to not only discover who Belldandy truly is, but additionally to sabotage the Auto Club of which Keiichi and the girls are members.

I wish my high school career was this exciting; the show does continue to get better.

My favourite scene so far has to be the description of the need for a DNA sample from Keiichi to restore Belldandy’s powers. He tries so hard not to think the obvious, so that when the kiss is avoided, Urd simply suggests a DNA sample would perhaps do better.

The look on his face... absolutely priceless!

By now I have finally gathered that the show is unlikely to produce the level of plot which I normally crave. But, I honestly don’t care. Ah! My Goddess is proving to be an enormous amount of fun. It continues to keep me guessing where the show will go next and all I hope is that this pace continues. Lovely!

9
Fantastic. Continuous entertainment all the way through!