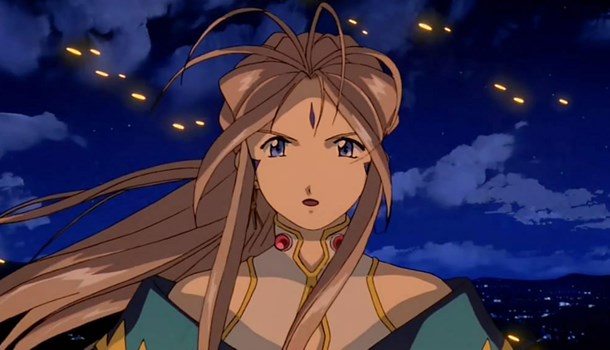 Finally the Goddess movie hits the UK after fans have been going nuts over it around the globe - so, does it live up to the hype, or are we served up with disapointment?

Thankfully it isn't the latter, for fans of the show at any rate. If you didn't like the series, then you won't like this, but for the legions of you who love soft-focus comedy romance, this will be a dream come true.

The movie contains almost everything you wished you'd seen in the OAV - the workings of Heaven, an appearence by the amighty (kinda) and an insight into the sisters' powers and importance in the grand scheme of things.

The scope of the plot is pretty grand too - Belldandy's old teacher has returned from a mysterious exile, and things are starting to go awry... It seems that Belldandy has forgotten something of vital importance and as a result Heaven finds itself on the recieving end of a revolution, and all hell is about to break loose! With Belldandy starting to forget all about a mortified Keichi, she becomes sick as a virus infects her systems and the race is on to restore the Goddess, her memory and the rule of Heaven before its too late.

The film keeps its pacing nicely, and thanks to the DVD format is available both dubbed and subbed, so the dramatic tension is kept to a maximum thanks to some excellent voice acting (on both tracks, unusually).

The animation is, as you'd expect with a movie, fluid and professional. The character designs work well in a big screen format and the details are lush and plentiful. Music ranges from sweet to orchestral, and the budget is in plenty of evidence on the screen.

The overall experience is a pleasant one and it can stand proudly as one of the big releases of 2003. Extras include the first episode of the Adventures of Mini Goddess and an art gallery.

Overall its hard not to recommend this - its a great film born of a great series and well worth its money - go grab it today and do it for the benefit of the UK anime industry, but more importantly, for yours!