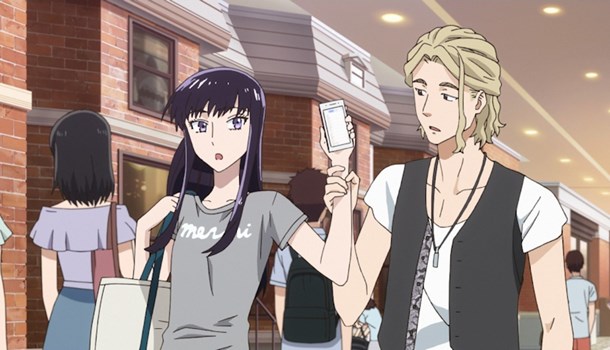 Ever had a piece of media explained to you, or after having read the synopsis you question whether it was worth your time when the very premise sounds somewhat problematic? After the Rain has an initial premise that may put people off; in this case, the story of a girl falling for a man 30 years her senior.

Now this could be handled in various troubling ways. Whether for comedy arising from the awkward situations of portraying a romance between two characters of vastly different ages, a commentary on the trope that age is but a number and true love conquers all, or even the exploitative themes that can be presented by having a naïve and young girl fall for an older and more experienced man that can take advantage of the situation. Thankfully this initial premise for After the Rain is not what the show is truly about. It may act as the gateway into the story but in essence the story and main theme of After the Rain is about reclaiming lost hopes and dreams for two different characters at two very different stages of their life.

The story begins with Akira Tachibana, a high school girl who, after a sports injury, has to give up running. At the lowest point in her life, the kind gesture of a family restaurant manager named Masami Kondo convinces her that she wants to work at the restaurant in order to keep herself busy outside of school and to find a new path in life away from the running track. What starts of as gratitude develops into romantic feelings towards Kondo, and we see Tachibana's attempts to get closer to him and try to instigate a romantic relationship. Rather than have the whole show be the will they/won't they dynamic most romance stories follow, After the Rain takes a slightly different approach. Kondo discovers Tachibana's feelings towards him pretty early on, but can't reciprocate them for several reasons; the age gap, their professional relationship and not really knowing enough about each other to make things work. This leads into a more platonic relationship where the two are not quite a couple but not just work colleagues either. A rather odd friendship forms between the two where one half is trying to convince the other to pursue a romantic relationship, while the other is taking a more pragmatic approach.

From here the show focuses on different aspects of the relationship and explores the regrets the characters have with their lives - one such instance is highlighted by Kondo commenting on how being around Tachibana reminds him of his age and the loss of his youth, but reignites his youthful passion for books. At one point in his life he loved to write but has resigned himself to mostly reading now, and it's through discovering this interest that Tachibana tries to create a bridge as a means to get closer to Kondo. Through their shared love of reading, Kondo begins to also reflect on how this passion absorbed him, and his failure to create anything of note has robbed him of both achievement and the opportunities he squandered while chasing his dream.

This realisation leads into one of the show's major themes; the act of following a dream and how to reclaim your passion after a huge setback. The title of show, After the Rain, is a literal statement of affairs, with the figurative rain representing a period of uncertainty, doubt and disappointment, and what follows once it has passed.

Tied into Kondo's self-reflection we have Tachibana, who now has a strained relationship with her best friend who has become the track team ace since Tachibana left. There are scenes of her friend trying to reach out and still be part of her life, encouraging Tachibana to re-join the team or take steps to start physical recovery, but Tachibana is so focused on her work and crush on Kondo she is forgetting about everything else. These interactions are handled rather well, showing Tachibana's fear of trying to run again and instead working on something else. At times in the show it feels like there may be awkward love triangle moments, especially between Tachibana and other workers at the restaurant. Thankfully the show does its best to avoid falling into these tropes and instead focuses on building on the drama between the two leads.

So while the premise may seem worrisome at face value, After the Rain isn't in any way inappropriate. It's a story about trying to recapture a dream. I think that many will either resonate with Tachibana, a young girl who has had a setback and is afraid to go back to what she loved for fear of getting hurt again, or with Kondo, trying to be a writer again after suffering so many setbacks chasing his passion, including pushing away those he loved. Trying to achieve a dream is scary. It can be a lot of work. A lot of sacrifices have to be made but the show argues that if you truly have a passion for something it is worth risking in order to achieve your true desires.

In terms of visuals, there are striking images, especially shots the city and the weather. The rain scenes are appropriately grey and dreary, with the clear skies that follow being colourful and bright. The English dub of the show is also very good with some great, realistic performances. There is one character who does sound a bit cartoonish, with what sounds like a mock-Brooklyn accent, but funnily enough it works for the character.

If you look past the premise you'll be treated to a delightful coming-of-age story about reclaiming lost youth, overcoming setbacks and following your dreams.

9
A thoughtful and charming story of reclaiming lost dreams