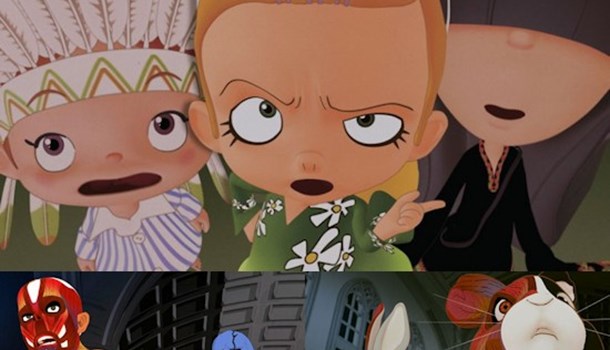 It isn't very often that I'm lost for words when it comes to describing something, but the opening gambit of Scotland Loves Anime 2012's Edinburgh weekend proper certainly left me in just such a state - how exactly would you describe this computer animated, motion capture comedy film?  As it's my job to do so, I'll try my best to give you a flavour of the film's plot, if such a word is even entirely appropriate.

The film begins by introducing us to three decidedly different elementary school girls as they explore their school - you have the dim but inquisitive and hyperactive Mako; the class-obsessed rich girl Miko; and the gothically inclined Mitsuko, all of whom share only a single trait, that being the propensity to cause trouble.  This soon comes to the fore as the trio explores a cordoned off science room in the school which is scheduled for demolition and refurbishment the next day, not only causing a ruckus but also raising merry hell with a human anatomy model they find there, tipping it to the floor and adorning it with all manner of graffiti.  Little do they know that this model is no simple mannequin but a living thing named Kunstlijk, as is his skeleton model counterpart Goth...

Incandescent with rage and thirsty for revenge, Kunstlijk sends out an invitation to the girls to a very special midnight "party" - a party which he plans to use to scare the living daylights out of them.  When the girls arrive and prove to be completely unfazed by everything that he has to throw at them, Kunstlijk is at a loss for what to do with them next... however, Goth has a plan - to use the girls to collect three medals held by some of the school's most sinister beings of legends, so that they can use the single wish these medals grant to save their science room and thus themselves.

If you're looking for a more simple, one-word summation of After School Midnighters, then it would be: Bonkers.  If you prefer a three-word synopsis, it would be: Utter, raving bonkers.  Everything about this film is as mad as a bag of cats listening to Madness while reading MAD Magazine - where else could you find a film that includes time travel, rocket propelled armpits, mafia rabbits and Chopin in a single movie?

Thankfully, and perhaps incredibly, the film manages to carry all of this by embracing its insanity with glee - it doesn't make a whole lot of sense and it knows it, and instead of trying to rationalise anything it simply throws everything that it can at you in the name of comedy to see what sticks.  Amazingly, rather than a complete mess, this leaves us with a comedy movie that is funny more often than it painfully misses the mark.  Admittedly, a lot of its humour is slapstick in nature and thus dependant on your enjoyment of such things, but it's hard not to laugh in the face of its ever-increasing series of unbelievable fiascos as our terrible trio rip up Kunstlijk's script over and over again despite his best efforts.  The movie even finds time for a heart-warming ending that is actually quite touching - a moment of childlike innocence that fits beautifully against the backdrop of an outing that often makes you laugh for decidedly childish reasons.

Perhaps the biggest barrier to entry when it comes to watching After School Midnighters is its visuals - although the heavy use of motion capture allows for some expressive movement, the more general aesthetic of the film is pretty ugly to the point that it looks like it could have been produced a couple of decades ago.  In an odd way this adds to its simple, manic charms, but at a time when we're treated to so many high quality CG movies this does feel like a major step backwards which might not suit everyone.

Also up for question is exactly who the film's target demographic is - for the most part it feels like a movie for kids, but some of its humour is close to the knuckle to the point where it could make for some uncomfortable moments for parents while other aspects of it may fly over the heads of a younger audience completely.

Ultimately though, After School Midnighters feels like a perfect festival film - it's a movie best watched with a crowd that you can laugh along with, and it's perfect popcorn fodder that you can forget about almost as soon as you leave the cinema, such are its throwaway delights.  This isn't a film that wants to teach you anything or get you thinking, it just wants to make you laugh until you snort and giggle at occasional poop and penis jokes - it's a film of simple (and perhaps even guilty) pleasures in other words, to the point where you might not even find justification to watch it a second time.

If nothing else, you'll want to watch this movie so that you can tell other people about it, and watch their face as you try to explain its core elements.

7
It's crazy, it's stupid and it makes little sense, but After School Midnighters is still a big bundle of laughs to watch.
LATEST REVIEWS