Aesthetica of a Rogue Hero - The Complete Series 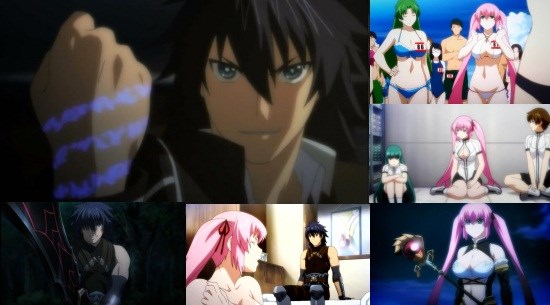 Aesthetica of a Rogue Hero - The Complete Series

Hot on the heels of Highschool DXD, Manga Entertainment is releasing another fan service-heavy fantasy action series, this time in the form of Aesthetica of a Rogue Hero. But as with any fan service series the question that begs to be asked is – can it keep the story to the fore once the boobs start flying or are we in for a soft-core disaster?

The world is full of tales of people being sucked into magical worlds and fighting to get home, but Aesthetica of a Rogue Hero is one of the few stories to tackle one particular question – what happens when they get home? It’s a huge question, and one that’s both really interesting and has a huge potential for all kinds of different stories. Aesthetica of a Rogue Hero's tale however is a little more basic than one might otherwise have hoped for from such a setting - as it turns out, what happens to these new heroes when they return home is that they’re shipped off to BABEL, a special school designed to deal with an influx of youngsters who have suddenly been imbued with a variety of magical powers which the rest of the word can’t control. Fresh from adventures in their own fantasy world are new students Akatsuki and his ‘long lost sister’ Miu (actually the daughter of the dark lord that Akatsuki defeated to become a hero). As our leading man, Akatsuki is frankly a bit of a pervert, thinking nothing of groping women’s chests or using some impressive sleight of hand to remove their underwear, though he just about manages to stay on people’s good side - one character can be heard knowingly commenting that despite his actions it’s impossible to deny that he’s actually a good person. Miu is a more timid, wallflower-type, in contrast to her new friends - the happy-go-lucky Izumi and Kana Hanazawa as Kuroneko... sorry, as Kuzuha the class president, who in no way shape or form resembles, sounds like or was created to be a popular character from another series... So, with all of that out of the way it’s back to school for some magical hijinks, touching everything from combat lessons to how to put a bra on. Unfortunately though. it appears people may be looking for the dark lord’s daughter, and they might just have found her.

The fan service in Aesthetica of a Rogue Hero is, of course, the big elephant in the room - there is a lot of it and it does feel a little over-the-top, although it only occasionally feels particularly exploitative. Instead it’s more reminiscent of the kind of humour you get in teen comedy films, and in the context of the series it’s neither particularly good nor bad. It never manages to match Highschool DxD’s ability to actually manage to pull off eroticism on occasion, but neither does it feel dull and unnecessary thanks to the series' sense of humour. As the main protagonist Akatsuki actually comes off a lot better than other male leads in this kind of show, showing a cheeky matter-of-fact humour in most things which will result in a laugh more often than not - in fact, the humour is one of the show's stronger elements; predictable enough that you know what’s coming but at the same time still good enough to still be funny, with director Rion Kujo expertly pulling the strings of the series to far greater effect than he pulled off in last year's Wanna be the Strongest in the World.

Aside from Akatsuki, the other characters really feel more than a little under-drawn but they’re still fun to watch. School council vice president Haruka is a particular favourite here, whose rapid descent into tsundere territory means that she manages to pull off being both the antagonist and a possible romantic interest at the same time (though let’s not play around here – this kind of series never takes any path but the obvious and Akatsuki will clearly end up with Miu whenever the story ends). In the villain role, Phil Burnett proves to be suitably bonkers and is more than unpleasant enough to make watching the other characters have at him feel pleasantly cathartic. Both the US and Japanese casts do a great job at pulling the characters off too, albeit with very different feels - the US dub has been fairly heavily re-worked to push a more over-the-top comedy angle filled with gags and (for some reason) Ghostbusters quotes. It works but I personally prefer the Japanese cast here, who make everything even funnier by playing the series almost totally straight, with Nobuhiko Okamoto in particular infusing every line with an almost deadly seriousness that’ll have you rolling on the floor.

On the other hand there are some problems here which far overshadow any issues that the fan service may or may not cause for you. The animation is really not great here, and the character designs are plain and boring with very little effort going into anything other than the two main protagonists - it’s never unwatchable, but it could have looked so much better. Even the action sequences don’t feel particularly energetic and you can’t help wishing that a little more time had been put in to adding some more polish to the shows visuals. The series also has a huge case of ‘light novel syndrome’, meaning that the series spends time setting up half a dozen plot lines and then resolves precisely none of them by the end. I can absolutely appreciate the reasons for this and I totally understand that studio ARMS were angling for another series, but the result is that you come to the end of the series and are just hit with a massive sense of disappointment that you won’t get to see how it all wraps up (particularly for us poor Westerners - at least the Japanese can go pick up the 11+ volumes of the light novels to find out how things turn out!) The story itself also feels more than a little unbalanced, with the five episode arc at the end feeling massively over-long and clearly dragged out to avoid having to adapt the next novel and go into another story.

We did really enjoy Aesthetica of a Rogue Hero - it's good fun, but the issues with it do make a difference and as a result some points have been deducted from the overall score below. If we’re honest, then Highschool DxD is still the one to watch if you can only afford one recent series in this genre, with its more contained story and superior visuals. But, if you can make room in your heart (and on your DVD shelf) for both then you’ll be pleased you picked this up.

7
Fast and fun but a fair way from great.