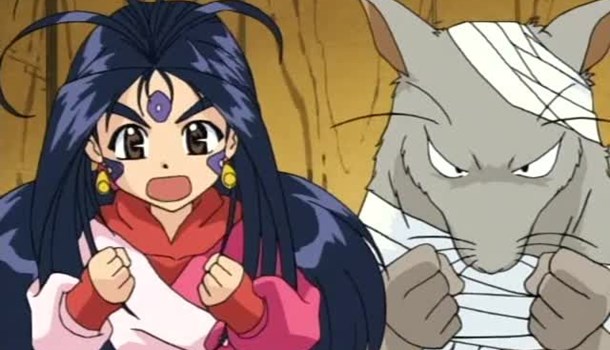 Mini Goddess is the Super Deformed spin off from Ah My Goddess!, which could be described as Pinky and the Brain with girls and fan service.

As you can probably tell from the title, the episodes revolve around miniaturised versions of the girls from Ah My Goddess! Each ten-minute instalment is purely episodic, without a trace of an ongoing story line.

The highlight of the series is Gan, the girls’ much abused pet rat. There’s something incredibly endearing about an animal that remains loyal no matter how many times the girls torment him, fire him into space or turn him into a giant slobbering monster.

The style of animation isn’t going to blow you away and in an SD series, it’s hardly surprising.
When a show lacks impressive presentation, it needs clever writing in order to succeed. Mini Goddess is not amazing, although there are a number of puns and references made to movies and other well-known anime.

The series could be best compared to Marmite. You will either love it and everything Ah My Goddess!, or feel rather uncomfortable and possibly even sick.

I regularly enjoy anime filled with giant robots, huge guns, swords and similar ‘manly’ things. The notion of sitting down with friends to watch Mini Goddess doesn’t spring to mind. Even the notion of watching it alone as a guilty pleasure sickens me to the core of my being.

My initial discomfort was triggered by the opening shot of the first episode where Super Deformed Urd is shown taking a bath in a teacup. It’s at this point I expect my father to walk in.
“What the hell are you watching son?”
“Dad, no! It’s not what you think. I’m…er…reviewing anime.”
“You need to get yourself a girlfriend.”
5
If you’re a fan of Ah My Goddess!, this will already be on your shopping list. However, if you like something less cutesified and wittier, Pinky and the Brain would be a suitable substitute to fill your need for miniaturised entertainment.
LATEST REVIEWS