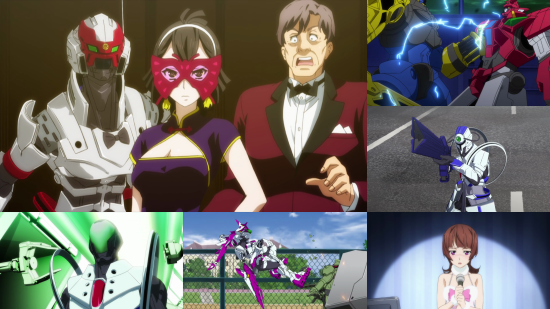 I have been debating with myself whether the antics, if you can call them that, of the Tokyo Metropolitan Police Force’s Unit 8 count as being an example of an anime police procedural or not. Now bear with me on this. Unit 8 has all the hallmarks of the standard “team” that you see on CSI, Criminal Minds, whatever. Unit 8 has its core personalities - the geeky one, the loudmouth, the enigmatic chief, the strong man, the trainspotter and the pest.

I think “pest” might actually be a bit harsh as by “pest” I actually mean, “a competent but arrogant person”. In other words, someone who acts a lot like myself, or how I used to behave when I started consulting within engineering. Asami is a royal pain in the arse. However, she is competent and when she arrives at Unit 8, admittedly on instructions from her former unit to help police and spy on her new colleagues, the first thing she sees is a lack of professionalism and competence. So, as a professional, the first thing she tries to do is to fix the problem.

The thing is, Asami is too confident in her own abilities, is judgemental, and in my opinion she quickly ceases to be the protagonist of the series and becomes more aking the comic relief as the other “secondary” characters repeatedly steal the limelight by being more interesting, better written, more competent and just all-round better. Asami has her moments, but she is far from the most interesting person on this mecha crime fighting team.

Case in point. Take the “geek” character in Unit 8, Madoka. She is the quiet, efficient, ruthless hacking type. You know the one. In most police procedurals they tend to be the character who can hack into anything and get you the full background information on any suspect. Madoka also just happens to have an interesting dark side in the form of being a gambling genius and a criminal legend in her own right.

My favourite character so far is actually a split between the enigmatic Haruka, who as a technical support solves cases with her attention to detail, and the leaders of this unit. The combination of her cute looks and her obsessiveness when it comes to transport and infrastructure is frankly borderline erotic, while the combination of Rin, the childish Chief and the respectful Funasaka adds some class to the team in a vintage sense. Hell, given that the team solves crimes caused by abuse of Willwears, which are a new generation of highly customisable and mobile mecha, and use their own customised mecha to combat these perpetrators, Funasaka and his experience actually makes the crime-solving team feel more whole, especially when he is piloting giant robots in an homage to the great mecha series of old.

I have been rather impressed by the strange logistical and political challenges that the team have encountered through the series. It is something not normally touched upon - a high-risk business where you have to follow procedure to authorise the use of armed force and persuasion (especially when using mechanised armour) and seek permission from government before you can actually use any of your special toys. This is purely for insurance and risk mitigation of course, and it still comes with a political price, but it is an aspect of police work which is regularly skipped over in many series. Why? Because its boring and it adds an obstacle to the story, but in this case, I actually think the obstacles borne from lack of permission helps.

Unit 8 isn’t liked. They are an experiment in policing and frankly, even though they do a lot of good, there are those who want rid of the police’s more “active” methods of crime solving and enforcement. So if they fail, there are some who would be glad to see the back of Unit 8. However, so far, even with a secret criminal organisation hell bent on creating chaos with each passing episode, Unit 8 seems to be doing rather well at solving their Willwear crimes in the most interesting ways possible, basically utilising any way that doesn’t involve a giant pointy stick or a gun.

The series does have a quite interesting attention to detail which can be missed at first glance. Take the Willwears used by the team. Each is unique, has specific abilities and is very highly detailed. The police response vehicle is also very well designed, even down to  the way it travels on the train lines around Tokyo, and I love the way that the mechs are launched via a railgun launch system. That is very cool, if a bit too Eddie the Eagle for me.

The problem is with Active Raid is that it doesn’t really go anywhere. Yes, Logos is a criminal organisation. Yes, they are rich. Yes, they are causing chaos. Why? Well, its not exactly the best reason and quite frankly the pacing required to actually achieve any form of conclusion is glacial at best. I appreciate that it takes a while to introduce all the members of the team but come on, two thirds of a series?! While the show mirrors its popular counterparts by following a “criminal of the week” format, the way that Active Raid links them is weak. I would have much preferred the mystery to be harder won, more obscured. But no, Logos is front and centre right the way through, which ruins much of the surprise unfortunately.

I have enjoyed what I have seen, and with a second series due to come later in the year it means that I will probably keep watching to find out if Madoka has any more card tricks or if Haruka is as fascinated by bridges and wind turbines as I am. Time will tell on that. Anyways, Active Raid isn’t a bad series, and worth a punt if you like your slightly weird police shows.

You can currently watch Active Raid in streaming form on Crunchyroll.

7
Never mind the mechs, I want Madoka to teach me how to play poker.