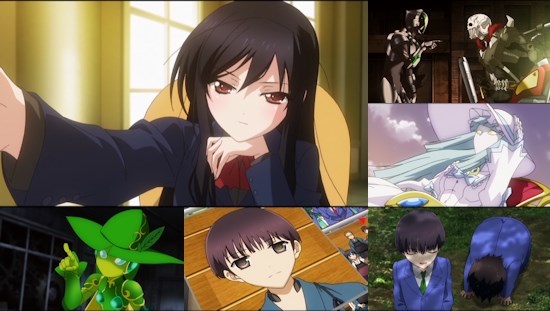 It might not have the stature or story of Sword Art Online, but the first half of Sunrise's adaptation of another Reki Kawahara light novel series, Accel World, certainly proved to be both engaging and entertaining. Can its second half follow suit, and perhaps even built upon those promising foundations?

As we re-join its world, Brain Burst is about to gain a new user in the form of Haruyuki and Takumu's friend Chiyuri - she might not quite have realised the importance of Accel World to those imbued with its abilities, seeing it as nothing more than a mere game that she wants to play with her old friends, but surprisingly she still seems to qualify to use the system as it successfully installs within her Neuro Linker. Even more surprising is the ability that her in-game avatar is provided with - the capability of healing others, a real rarity in a game where offensive power is the norm.

There's little time for Chiyu to learn how to harness this power however, as the arrival of new first-year students at school appears to have brought with it another Burst Linker... but who? The obvious culprit seems to be a boy named Seiji Nomi who can not only give Taku a whipping at kendo but also frequently boasts 100% test scores - however, attempts to catch him in the act of using Brain Burst all come to naught, as nobody appears in the list of users within the game. Eventually Nomi reveals himself to his seniors, but not before pushing both Haruyuki and Chiyuri into a sufficiently compromising position that he can blackmail them both to do his bidding, attempting to force them to give away their Burst Points so that he can grow his own skill level with ease.

Target for real-world bullying he might be, but Arita is having none of this - his attempt to stand up to Nomi however leads to the loss of his most prized ability within Accel World, and at the worst time possible as it coincides with Kuroyukihime leaving for a school trip to Okinawa, far away from the action in Tokyo. Can Haruyuki and his friends regain the upper hand and put Nomi in his place, or are things only to become more fraught as they try to cope with the head of their legion?

Although the prospect of the above storyline dominating the entire second half of the series might sound like it could stretch itself decidedly thin, that really isn't the case here - beyond an arguably ill-advised switch to a side-story involving Kuroyukihime's trip to Okinawa just after a pivotal reveal in the main plot which takes up a couple of episodes, there is plenty of meat on the bones of this story arc for the series to chew on, offering up twists, turns and some interesting thoughts about the Accelerated World in which its cast live be it cheating, real world bullying or beyond.

This mostly consistent pacing, excellent sense of world-building and making good use of that world to tell a story helps to smooth some of the cracks and inconsistencies within the series - Haruyuki's relationship with Kuroyukihime continues to be perhaps the least believable thing about the entire endeavour (especially when you start seeing every female character apparently fallen in love with our far from lovable protagonist), and once you start thinking about aspects of the story too hard it all begins to crumble somewhat, but none of these issues fundamentally undermine the series to the point where it stops being fun to watch, which when push comes to shove is what really matters for a show like this.

Backing this up is Sunrise's visual treatment of the series, which if anything feels even more accomplished in the second half than it did in the first, with more varied locales to work with and more characters to depict both inside of Brain Burst and out. In short, everything within the series looks as cool as a future involving cutting-edge technology and alternate realities should, lending credence to the suggestion that the show is best viewed on Blu-Ray (although we only had the series to hand on DVD for this review). As per the first half, we'd also suggest that the original Japanese cast deliver a more passionate performance than their English counterparts, and with only a few minor subtitle quibbles consisting of a few grammatical errors and one mistimed line of text there's nothing that should spoil your enjoyment if the Japanese audio is indeed your preference.

For all of the fascinating ideas and concepts that Accel World plays with, at the end of the day all that really matters is that it delivers an entertaining narrative. It would be easy to take a look at the series as a whole and start pulling apart the plot to find myriad weaknesses and moments of wasted potential, and let's make no mistake it isn't a tour de force of intelligent writing, but then again it doesn't ever claim to be either and always keeps its modest goals in sight as it moves towards them swiftly and assuredly. If virtual worlds and the merging of reality and video games fascinates you, or if you've simply already watched and enjoyed Sword Art Online, then Accel World will be a worthy addition to your collection that will give you plenty of enjoyment for your money.

English and Japanese stereo audio with English subtitles.  Extras on these discs consist solely of text-free opening and ending credits.

7
Much like its first half, Accel World proves to be a well-paced and consistently fun series that rises above its flaws to deliver pure, simple entertainment.
LATEST REVIEWS