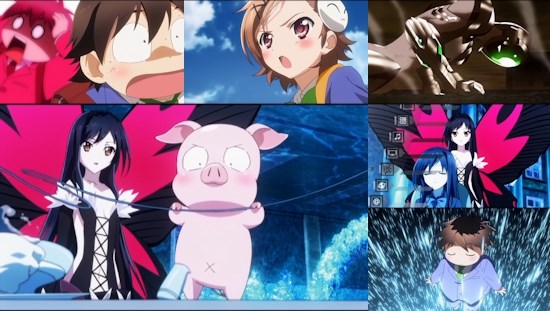 Following the global success of Sword Art Online both inside of Japan and out, it's no surprise to see another Reki Kawahara work reach the UK in the form of its anime adaptation - this time around, it's MVM Entertainment who give us an opportunity to dive into a virtual world via their two-volume release of Accel World. Can it impress us in the same that Sword Art Online did with its strong world-building?

As much as many of us rail against the stereotype of what a video games enthusiast might be, Haruyuki Arita fits that stereotype perfectly - he's overweight, short and seemingly only of interest to those amongst his peers who want to bully him and make him comply to their every whim. It's little wonder then that Arita spends his spare time delving deep into the virtual world to which all and sundry have access via "Neuro Linker" units; collars which many teenagers now sport having had them implanted at birth, a far cry from sitting in front of a computer of games console.

Arita's speed and efficiency within this virtual world has brought him to the attention of an unexpected admirer - his school's student council vice-president, known only as Kuroyukihime. In fact, she has a rather intriguing opportunity which she bestows upon him - an application known as Brain Burst, which not only offers the user access to an online fighting game by the same name, but also the ability to massively slow down time in the real world as a result, bringing the user into the Accelerated World of the show's title.

This convergence between the real and virtual worlds is a pivotal part of Accel World's story - the Brain Burst application is not just a game but a way of life, with its ability to slow down time (or rather, to accelerate the user's brain waves a thousandfold) offering boundless opportunities to the select few with access to it than can provide them with a leg-up in wherever their daily life may take them. However, lose all of your in-game points and you lose this ability with them - a fact that has seen progress within the game slow to a halt as its strongest level nine players, each of whom are the "king" of a faction, have made a pact not to attack one another, leaving Brain Burst's mysterious level ten and the unknown effects which it may bring untouched. It seems that, for whatever reason, Kuroyukihime wants to shatter this status quo, and Haruyuki is an important part of her plan, especially as there seems to be no shortage of opposition to her efforts.

Compared to the easily accessible world of Aincrad in Sword Art Online, Accel World takes a little longer to warm up - its fighting game basis doesn't have the same immediacy as an MMORPG (although some of these fighting game elements seem to be abandoned the further the series progresses), but its concept of an Augmented Reality and some very direct influences upon the real world from this game both offer up some compelling fare. In these terms, Haruyuki and Kuroyukihime both work well in our introduction to Accel World - the former is a wimpy idiot but with natural in-game talent to offset this, while the latter is sufficiently driven and mysterious to ensure that you want to keep on digging into her character and motivations. Add in some intriguing or downright fun additional characters and you have a song grounding for this first half of the series that drives it along at an excellent pace that never drags or allows itself to get too caught up in something before moving on to its next plot point or narrative arc.

Where Accel World does really struggle however is in the way it builds up Haruyuki's romantic interests - much like Sword Art Online's Kirito, every girl he meets seems to fall for him instantaneously for absolutely no reason whatsoever, so much so that even the show itself seems at odds to explain any of it. Thus, our protagonist lopes around being an idiot most of the times, redeeming himself only occasionally yet still being pursued by everyone from childhood friends to high-ranking Brain Burst players. It's so unbelievable as to break any sense of reality within the world it's so carefully built whenever it raises its head, and it's thankful that these elements take a minor back seat to the action and story progression for the most part even when it decides to put some romance at the centre of events.

Visually, Sunrise have done a pretty good job here - Accel World isn't always the most inventive in the way it depicts its virtual world, but it offers a striking contrast to the real world upon which it is based and lets its characters and their designs do the talking. For a series whose male and female leads couldn't look much more different, perhaps the real genius here is in making two characters at polar opposites of the spectrum aesthetically speaking work well on-screen together, and somehow this has been pulled off with aplomb throughout.

Judged by this first half, Accel World's English dub is a little flat and lifeless but still largely acceptable, albeit bested by the Japanese voice cast who put far more passion and energy into everything that they do, with more striking results to show for it. The show also boasts a fitting and decent soundtrack to round off its package nicely.

It's largely thanks to Reki Kawahara's works that we've seen so many series set partially or entirely in virtual worlds of late (although it isn't a new concept by any stretch of the imagination), and although the first half of Accel World can't match Sword Art Online in terms of either its world-building or plot it still delivers an enjoyable and satisfying slice of entertainment that is certainly worth-watching if you enjoy a well-paced story with an interesting core premise. The over-bearing "wish fulfilment" of its romantic undertones are silly and almost off-putting, but thankfully they take a back seat to some decent action and story-telling that ensures that while Accel World might not excel, it isn't too far off doing so.

7
An interesting concept that stands out from other anime set in a virtual world, and a well-paced and delivered story so far to boot.
LATEST REVIEWS