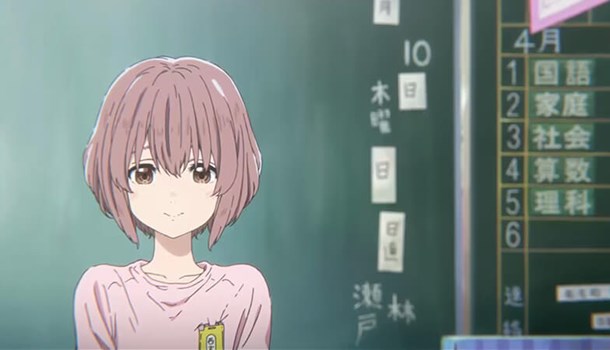 Here at UK Anime Network we first saw A Silent Voice when it aired as part of Scotland Loves Anime 2016, and our then Editor-in-chief Andy Hanley reviewed it for the site. Also shown at the festival was Makoto Shinkai’s Your Name, which went on to be the biggest grossing anime movie of all time. That we walked away from Scotland Loves Anime 2016 genuinely arguing over which was the better film, and that we continued to do so in our 2016 Awards podcast - where A Silent Voice won Best Drama and Best overall anime of 2016 - should give you some indication of the calibre of film we are talking about. Though this should come as no surprise to those familiar with the original manga, which was itself not short of critical acclaim.

Though perhaps - before we delve into the review proper - a warning is in order: This film tackles some very difficult subjects, especially those surrounding bullying, suicide, and disability. Thus, A Silent Voice can be a difficult viewing experience at times, but rest assured it is thoroughly worthwhile.

The film opens with its protagonist - Shoya Ishida - seemingly preparing to end his life. He puts all his affairs in order and heads to a bridge, intending to jump off. However, after a flashback to his elementary school days he changes his mind and decides to walk a different path. It is at this point that A Silent Voice blurts out perhaps its clumsiest moment, a montage set to The Who's My Generation, which feels a bit on the nose for tale of teenage angst.

We are then taken on a trip into Shoya’s past, and the events which ultimately lead to his suicidal thoughts. Shoya was a seemingly popular and happy elementary school student, albeit a bit boisterous, with a rough-and-tumble approach to life. That is until one day a new girl - Shoko Nishimiya - joins the class. Shoko’s introduction quickly establishes that she is deaf and that the rest of the class really have no idea how to deal with this fact. At first, they all try to make her feel welcome, but ultimately some come to see Shoko as more of a nuisance than anything else. Shoya picks up on his friend's feelings and begins to reflect them in his actions. Something which his classmates are all too keen to encourage and even participate in. At first simply through voicing displeasure with the situation in which they find themselves, but ultimately it descends into full blown bullying of Shoko.

This phase of the film makes for incredibly difficult viewing, especially for anyone who has been the victim of bullying themselves. The portrayal of the merciless and relentless victimisation and ostracisation of Shoko will be instantly familiar to anyone with even a passing familiarity with schoolyard bullies. Eventually - after the broken hearing aids mount up way beyond the possibilities of accidental damage - parents and teachers get involved. It is this point that perhaps provides the truest reflection of the nature of bullies, with the whole class under the microscope they pin all of the blame firmly on Shoya. Shoya’s mother ends up having to pay for all the damage her son caused, and makes a sincere apology to Shoko’s mother, which takes a surprisingly physical turn. From there on the bully becomes the bullied, as Shoya finds himself victimised and ostracised just as Shoko had been. Though Shoko tries to assist him, he pushes her further away and eventually Shoko changes schools.

Difficult though it may be to watch this portion of A Silent Voice, it sets the scene for the rest of the film. And I can’t recall ever seeing a more accurate or sympathetic depiction of bullying in animated form.

Sometime later - after prolonged torment at the hands of his former friends - Shoya moves up to high school. Though there is no escape for him there, as his former friends warn others in the school about the terrible bully from their elementary school. Shoya accepts this as his punishment for his prior actions, and begins to actively withdraw from school life. This is cleverly represented by those around him having blue crosses covering their faces. A neat visual cue which could have easily proved clumsy or trite in lesser hands. This leads us right back to the beginning, and Shoya's suicidal thoughts. Though a reunion with Shoko leads him to question his decision and ultimately steers him along the path to redemption.

As Shoya begins to reforge his links to others the film begins to take on a lighter tone, with some fantastic comedic moments and touching character drama thrown into the mix. That this sits so well amongst the darker content is testament to the director’s skill, as the balance could easily have been lost in lesser hands. Though the darker tones are never too far away, and old wounds aren’t so easily healed. This all comes to a head in the films dramatic final act, where all the years of anguish and despair come to the fore, threatening all the progress Shoya and Shoko had made.

I really cannot overstate how touching and affecting A Silent Voice is. That the film manages to present each and every character in a relatable way is an astounding piece of storytelling. Somehow each character is laid bare without any need for explanation, you feel what the characters are feeling. There are no longwinded explanations, or overdrawn scenes of characters talking about their feelings. A Silent Voice is much more subtle than that, using facial expressions, intonations, tone of voice and even hand signs to paint a picture. Being deaf sign language makes up a sizeable chunk of Shoko’s communication, so it is fitting that the film's signing communicates with the viewer as much as with the other characters. This ties in well with the aforementioned use of blue crosses to illustrate Shoya’s isolation, with crosses gradually falling from the faces of those he gets closer to, and reappearing when there is a setback.

Being a Kyoto Animation (KyoAni) production I doubt I need mention how good the animation is. Shoya looks every inch the gangly, slightly awkward, teenage boy. In fact, the vast majority of the characters are perfectly realised, from the tomboyish Yuzuru to Shoko’s doting grandmother. With perhaps only the comically proportioned hair of Tomohiro feeling a little out of place, though his comedic appearance is rather the point. The colour palette is an interesting choice, using more subtle shades than you often get in anime, there is an almost pastel like feel at times. Though there isn’t a single scene that is anything less than gorgeously animated.

Audio wise both the Japanese original audio and the new English dub (commissioned by Anime Limited themselves) are nothing short of exceptional. Both treat the character of Shoko in particular extraordinarily well, something which could very easily have been uncomfortable or even problematic in the wrong hands. Though this is perhaps one of those rare occasions where the English dub may have the edge. While Saori Hayami’s performance is exceptional, it can’t quite match the authenticity of Lexi Cowden, who is herself deaf. However, some things are inevitably lost in translation, such as a conversation where one of the characters mishears the word suki (like/love) as tsuki (moon) - which makes perfect sense in Japanese, but not so much in English.

At its core A Silent Voice is a tale of redemption, and all of the characters grow in one way or another. You would struggle to find a better realised tale of this type. The film hits every note it sets out to perfectly, it ties up all its loose ends and even manages to finish on an optimistic note. A Silent Voice is a rollercoaster ride of emotion, as Andy put it in our original review it is “in turns harrowing, beautiful, depressing and uplifting, but always highly engaging and filled with life”. Despite the difficult subject matter A Silent Voice is an incredibly rewarding viewing experience that is as close to perfect as any film of this type you could care to mention.

10
As close to perfect as any film could hope to be, and lovingly curated by Anime Limited.
LATEST REVIEWS