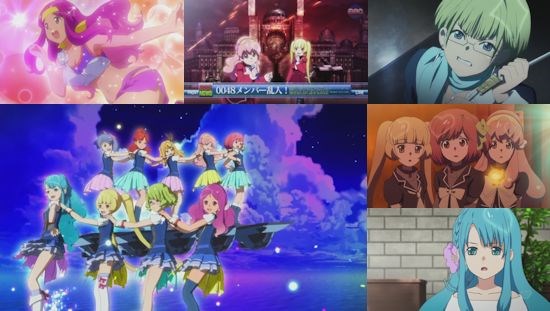 It's one of those oddities of the streaming ecosystem that every once in a while we see a sequel stream legally to the west with no sign of its predecessor.  Everyone knows that there's an elephant occupying the room, and that the elephant in question is wearing an eye patch and trumpeting "shiver me timbers!" at the top of its lungs, but do we dare mention the elephant?  No, we do not.

This is exactly the case with the second season of "idol space opera" anime (and promotional vehicle for the J-Pop juggernaut that is AKB48) AKB0048, subtitled Next Stage.  This is a series that requires a half-decent knowledge of its first series to fully appreciate the second season, which makes it a potentially hard sell for those who prefer to walk on the side of legality and thus haven't seen that initial season.

Assuming you aren't one of those angelic types, allow me to try and fill in some of the blanks for you before we proceed with the review.  AKB0048 is set in a far-flung future where humanity has spread out across the cosmos - however, somewhere along the line the powers that be have decided that any form of entertainment is a scourge of humanity (they must have been watching The X-Factor) and have thus banned it completely, even going as far as to deploy armed troops to put a halt to any outbreaks of entertainment which might occur.  Flying in the face of this is the hugely popular guerrilla idol group of the show's title - a group of girls that are more than just a pretty face and heavenly voice as they also prove themselves proficient in flying giant robots, using microphones that double as light sabers and electrocuting assailants with hair clips as they stage illegal concerts for their adoring fans.

The main thrust of the first season surrounds a group of girls who apply to the group's latest set of auditions for "understudies" - potential future members of AKB0048 proper who get to work and train alongside their fully-fledged counterparts.  By the end of the series, these girls are well-placed in their understudy roles, with two of them - Nagisa and Chieri - particularly in the limelight as the mysterious Sensei Sensei and the cute but odd entity known as the Kirara both seem to signal the beginning of a new era for the group.

For those starting the series cold with Next Stage, there's absolutely zero recap offered or room allowed for you to get to grips with the show - instead, you're thrown full-tilt into its world and the various elements of craziness that go with it.  If nothing else, you're certainly left in no doubt as to just how series the anti-entertainment DES organisation is, with the centrepiece of Next Stage's first episode being the kidnap and trial of a handful of the group's members.  This does at least give you a chance to feel what the series can do and the kind of stuff that it delights in, whether it's Chieri's assertive speech about her desire to become an idol or the epic battle-cum-song and dance number that takes place as the other members of AKB0048 seek to break out their jailed colleagues.

After that high octane start, things settle down closer to what you could probably call the "norm" for this series - the threat of violence and a further crackdown on the group's activities is always there, but for the most part a hefty chunk of episodes two and three are simply about striving to be a good idol.  It's a goal that is made all the more important by the announcement of a General Election of all the group's members (as per those encountered by the real life AKB48), coupled with the reintroduction of the coveted "Centre Nova" spot that is the pinnacle of the idol's craft, albeit one with a strange and seemingly dangerous past.  Much of this stuff is the kind of material you could find in any idol series, given an extra dose of spice by the drama inherent in being an idol in a world where entertainment is banned - this is particularly true in Chieri's case, as her rise to prominence becomes a big part of the story set against the fact that her father is the owner of the massive Zodiac Corporation, who themselves seem to have conflicting interests surrounding AKB0048's activities.

In one sense, AKB0048 is a work of genius in that it tries (and succeeds to some degree) to provide something for everyone.  Love shows about wannabe idols?  It has you covered.  Wish there was more anime like Macross Frontier?  AKB0048 mixes music and mecha deftly when it needs to (it was created by Shoji Kawamori, after all).  Like a little mild fan service to brighten your day?  Next Stage is a little more regular in delivering these moments than its predecessor.  Like conspiratorial, wide-reaching space opera?  There's an element of that too, for sure.

Where I'm not quite so convinced about AKB0048 is in its execution - with such a huge cast of characters present within the group itself it's hard to really focus on particular individuals and their stories even when one person is clearly supposed to be the one in the spotlight, and as a result of this it's often difficult to be drawn into what's going on emotionally to any degree.  Some elements of the series also require you to have at least a passing knowledge of who AKB48 are and how the group works - if you aren't aware of the important of general elections within the group, how they work and what they mean for those involved, then you might not fully appreciate some of the major plot points introduced here.

When the series does click with the viewer and get into gear however, it can be a pretty fun experience - the show is a riot of colour whenever the idols are involved with mostly distinctive character designs (a must with so many idols in one place!), each of which has a heart imprinted within their hair, and this contrasts nicely with the dark, bland entertainment-free outside world which only ever comes to life when AKB0048 roll into town.  The show's action and concert scenes are also pretty striking, although in a way which might not suit everybody - the heavy use of CG in these scenes is clear to see and can be a jarring contrast against its more traditional animation, but by the same token it adds a dynamism and flexibility to on-screen events that wouldn't be possible otherwise.  Much like the recent Berserk movies (and yes, I realise I'm now comparing an idol show and Berserk!) it's a compromise that can be hard to swallow, but when it pulls it off it does the job nicely.

Provided you aren't allergic to J-pop, it isn't really surprising to find that the AKB48 tracks used within the series are all catchy, pleasing and well-produced numbers that... well, make you want to buy AKB48 CDs, to be honest.  It's almost as if this was the goal of the series all along!

Perhaps most important for Next Stage at this early stage is that it feels like it has the potential to tell a truly interesting story - the pure idol aspects of the show are warming up quite nicely with a couple of doses of the mysterious on the side, and there are fascinating individual stories to be told that are clearly being built into the wider narrative of the series.  Can it keep all of these balls in the air without dropping some of them?  I doubt it, but perhaps it doesn't need to if it wants to be remembered as a fun show that did something very different with the idol anime genre.

It might not be the next Macross Frontier or anything of that ilk, and for anyone new to either AKB0048 or AKB48 themselves it might be a leap too far in terms of watching and enjoying it, but we have to commend Next Stage (and indeed the show as a whole) for trying something outside of the norm, and for all of its failings there are also things to enjoy or look forward to even within these opening episodes of this second season.

You can currently watch AKB0048: Next Stage in streaming form via Crunchyroll.

6
It's an uneven start to the series that falters here and there, and it's tough to recommend it to anyone who hasn't seen season one, but AKB0048 Next Stage has some promising ideas provided it executes on them well.
LATEST REVIEWS