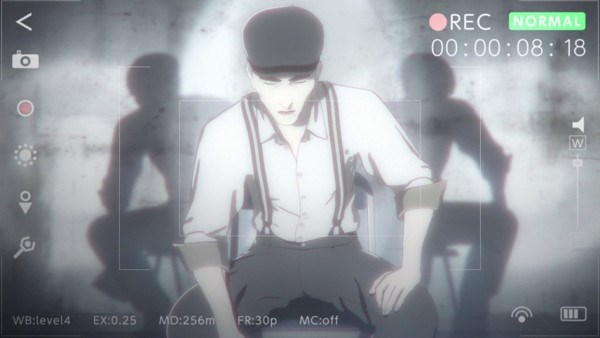 Kei Nagai wants to live an ordinary life; he wants to go to school, speak to friends, and just generally be a decent human being. Lucky for us this hope is brutally dashed by a speeding truck in the first episode of this latest release from Anime Limited. Adapted from the original manga by Gamon Sakurai by 3D animation studio Polygon Pictures (Knights of Sidonia) this thirteen episode series follows the destruction of Kei's life and the dark forces that swell up around him, as his previously unknown powers manifest and he is forced on the run.

The truck I had previously mentioned reveals to the world that Kei is a rare being known as an Ajin, able to revive from any injury, maiming, or even death, and summon a creepy, decaying, but powerful servant called an IBM or black ghost. This is bad news for Kei because the world at large hate and fear Ajin, not ot mention the Japanese Government want him for their own nefarious means. This leaves Kei on the run and desperate. He is plunged into a world of pain and betrayal as he tries to find his way back to his simple, normal life. Along the way he meets a seemingly friendly old man called Sato, who claims he wants to help him and the other Ajin in Japan, however his definition of help may give Kei pause for thought.

I want to talk about the cast of this series first of all: this is a dark show and the characters that populate the world reflect that, these are not a group of people that are easy to root for and, at times, you will wonder if any of them are supposed to be likeable. However I think the writer deserves kudos for resisting the usual tropes, even if it appeared that they were being embraced initially. Some Googling revealed that the original writer of the manga left the project early on and was replaced by the artist/creator, who clearly wanted a bleaker and darker tone for this series. The anime does a good job of managing the gaps but some characters around the mid-point of the series (reflective of the change over in the manga) embrace behaviours that had only been a small part of their make up until that point. Kei is the most notably hit by this, his more traditional hero type taking a heavy swing into more of a Light Yagami/Lelouch vi Britannia antihero stance. He still makes for a great protagonist, a cold manipulative bastard who has to be forced into heroic actions and only for his own benefit most of the time. He is well matched, and in some ways over shadowed, by his nemesis Sato. Initially seeming like a sort of oddity compared to the rest of the cast, Sato quickly develops into a fantastic bad guy, ruthless, charismatic, intimidating and fascinating to watch. He also bags the majority of the cool action scenes, with an extended one across episodes eleven and twelve providing the highlight of the series, which scores a ten for sheer insanity and ingenuity.

The action and violence in the series are well handled, lots of blood but not much in the way of gore. There are however some extended scenes of torture that are more effective for going the route of 'imply but don't show'. The creepy IBMs also add another dimension to the fights, being used essentially as avatars for their owners in battle. Leaping around like Spider-Man in some sequences, or lumbering like Jason Voorhees in others. They also allow for a neat little scene the first time two Ajin face off, as neither has a clue how to handle the others IBM in a fight.

The biggest talking point of this series is of course the animation. Polygon Pictures 3D animation style has proven a bit of a divisive thing in anime circles, with some decrying it as not 'real' anime. Personally I thought the use here was mostly excellent and looked better than their previous series Knights of Sidonia. It suffers from some of the same problems however, with character's at times seeming stiff and looking oddly dead eyed, with the occasional shot looking like a cut scene from a videogame, these are however minor quibbles.

The set Anime Limited have sent out here also includes a third disc with the recap movie Ajin Part 1: Shodo, essentially the first six episodes edited together with no new scenes or additions, the first of a trilogy. The movie might be a useful recap before delving into the upcoming second series, but I would recommend the series over the recap.

To conclude: Ajin is great. Seriously just go watch it. Its a breath of fresh air and a kick up the backside that the action genre needs. It has a exciting and engaging story, an interesting cast, and some fantastically executed action scenes. Roll on series two!

Series contains the English dub and original Japanese track, with English subtitles. The movie is subtitle only. Presented in Collectors packaging: a rigid case with a digipak, to hold the three Blu-ray discs, and a 64-page materials book.