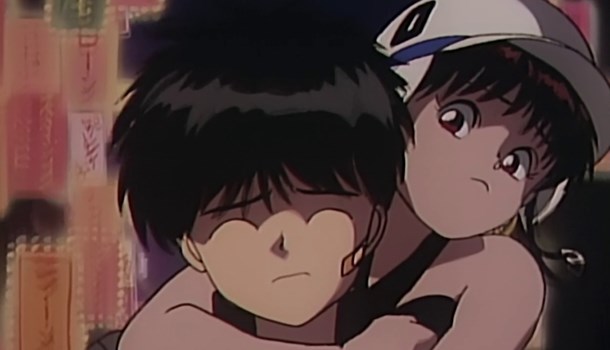 Yakumo Fuji is just your average high school student (well, not quite, he does work in a transvestite bar! ) until he runs into Pai, the last descendant of the mystical race known as Sanjjiyan. Pai brings back the remains of Yakumo's missing father and she tells Yakumo of her lifelong dream to become a human.

The pair then proceed to locate Pai's sole hope of becoming human, The Ningen statue.

First of all, I thoroughly enjoyed both parts to this, and Pai is one of my favourite anime characters. In part one, when Yakumo and Pai encounter supernatural forces after trying to get hold of the statue, you're very much absorbed by what's going on, and the characters (especially Pai ) are all very likeable, though it can get a bit confusing at times. Its the same with part two, as the pair continue to search for the statue which will make Pai a human, running into more eerie characters and situations, the plot thickens. The series has its fair share of gory moments, so prepare to avert your eyes if you're sensitive to this kind of graphic imagery.

As absorbing as 3x3 eyes actually is, the dubbing is a huge let down, and you may find your self rewinding the tape at times to actually comprehend what they're saying.

Still, this is an excellent anime series, the animation is nothing short of stunning, and I loved the ending to part two.

Instead of buying parts one and two separately for £11.99 each, I strongly suggest you buy the 2 in one tape for only £13.99 - after all, it makes sense... If I had seen this subtitled, it probably would have received a higher score, but this is still an anime series well worth adding to your collection.

7
An epic series hampered by a poor dub and early BBFC cuts.