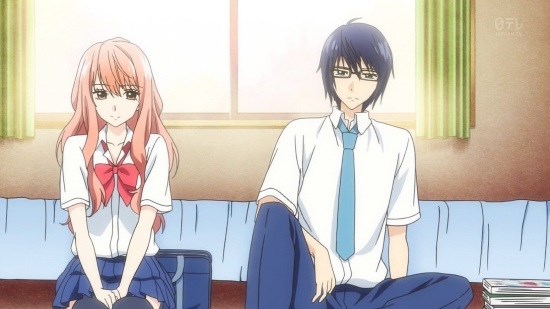 High school romance anime are 10 a penny these days and it's pretty difficult to break through the crowd unless you have a really solid hook or great characters to make sure you stick around in people's minds after the credits roll. It's even tougher nowadays after Scum's Wish showed that the genre can really up its game if it wants to. The recent adaptation of Mao Nanami’s 3D Kanojo (Real Girl) is the latest show to pull out the tropes of the genre on HiDive. Let's see if theres romance in the air.

Hikaru Tsutsui is our latest young man lining up to be struck by Cupid's arrow. Or at least he would be if he weren't a full on otaku with no interest in 3D girls or anyone else really bar his cat ear wearing friend Ito (their school seems to have a pretty lax dress code). Things are about to change when he ends up on pool cleaning duty with the beautiful Iroha who has a bit of a reputation around school (bikes may be involved if you catch our drift). Despite Tsutsui’s relentless attempts to ignore her, Iroha stays on his radar as she stands up for him against bullies and then asks him out sending him head first into a relationship he'd never imagined.

On the surface there's nothing about Real Girl that really stands out. We’ve all seen the otaku finds romance with the hot 'normal’ person trope played out enough for it not to be a big deal (and enough for us to be insufferably jealous). What Real Girl does though is to present its characters and their troubles in such an earnest manner that you can't help but keep watching. Tsutsui’s moral struggles on how he's supposed to act as part of this new couple end up endearing rather than annoying and the relationship at the heart of things is genuinely sweet. Iroha admittedly has a pretty thankless role here as despite the show's attempts to change things up, she's still basically the girl with a dark secret (2:1 terminal illness, 5:1 princess, 10:1 alien) and that naturally leads the audience down a rather well trodden path. She's still very likeable and charming though and the few twists she does introduce are definitely interesting.

Even the minor characters are handled well as they develop their own relationships in and around the main pair. In particular it's great that these arcs work really well at subverting your expectations of what role the side characters are going to play with the typical bully and romantic rival quickly heading down routes you'll likely not see coming.

Hoods Entertainment, normally best known for more...well...trashy affairs prove to have a surprisingly delicate touch here. There's not a hint of fanservice on show and the whole show looks really solid though the nature of the series doesn't lend itself to any particularly flashy visuals. The character designs are a little flat but are accurate to the manga designs and the animation on display isn't too bad either. The series opener Daigi na Koto is great too and is easily one of the best ones of the season.

Whilst Real Girl was never going to make the kind of waves that Scum's Wish did (and lets face it - it'll take some doing to do that!), it does present a great little romance that manages to hold its ground in a season that's defied a lot of expectations (even if not always in a good way…). You'll certainly find a lot to like here if you fancy something with a lot of charm if not much substance.

7
A charming, refreshing slice of romance