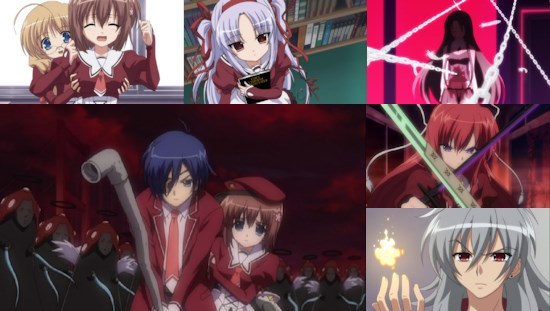 If you were to watch the opening scene of 11 Eyes in isolation, you'd be forgiven for thinking that it's shooting for the "quickest death of an anime protagonist" world record, as we see star of the show Kakeru slain by his very own sister in brutal fashion before our very eyes. Fast forward a little however and we find that this event never quite took place - Kakeru's sister is no more certainly, having seemingly committed suicide, but Kakeru himself is alive, well, and living a life under the watchful eye of his doting childhood friend Yuka.

If all of this sounds very normal (aside perhaps from Kakeru's rather notable use of an eyepatch), then rest assured that something odd is never far away, and an after-school shopping trip is soon turned into a nightmare as the pair are transported into some kind of alternate version of their world - one filled with terrifying monsters. Luckily for them they're soon returned to their own world, but what on earth was this alternate reality they come to know of as the "Red Night"?

It's a place with which they'll soon become far more familiar than Kakeru and Yuka might ever have wished for, as they're pulled into the Red Night again, this time meeting a sword-wielding girl who saves them. She is but one of a growing number of combatants in this world who are fighting the strange Black Knights - but has Kakeru been called to the Red Night to become one of those fighters, and what of his childhood friend? The events that transpire bring forth questions about not just Kakeru himself, but even his sister and the true nature of the opponents that they're fighting.

11 Eyes is based on an adult visual novel, and initially it certainly shows - the series goes to great pains to ensure that we get to see the underwear of every female character at least once before getting bored of that lark and shifting its focus more squarely towards the story at hand. For much of the first half of the series, that isn't a particularly exciting proposition either - the core premise of the series feels reminiscent of plenty of other anime from Shana to Persona 4 without doing anything to break away from looking like a poor relation in those comparisons, and the earnest setting of the Red Night and its overblown character names and lore leaves you feeling like the entire thing is likely to turn into an off-shoot of Love, Chunibyou and Other Delusions at any moment.

If you manage to make it through the first half of 11 Eyes however, things certainly take an upward turn from the stale fare presented earlier - the show's biggest twist perhaps isn't a complete shock but it's a welcome shift in the ultimate goal of all involved, and the series also wastes to time digging deeper into the psychological trauma of the increasingly brutal war taking place within the confines of the Red Night. It's a heady mix of shattered personalities, visceral violence, sex and desire - if the first six episodes of the show were a slog to get through, the latter half ultimately left me brushing of other things that needed doing to see the series through to its finale (although the less said about its subsequent OVA the better). 11 Eyes might never turn into a masterpiece, but it certainly builds a compelling end-game for its characters and setting, which only makes me wish it had gotten to the real meat of its story far quicker.

The show also has some neat presentational trappings that stand out over and above what is a workmanlike effort from production studio Dogakobo. The transitions into, and indeed the atmosphere of, the Red Night and everything surround it in particular engaging, but the real highlight of 11 Eyes' presentation is its sound design, which is simply superb - even ignoring its Eastern European narration over the introduction to episodes which works surprisingly well we enter the Red Night with an ear-piercing shattering to find a world filled with discomfiting sound, accentuated further by the chilling shrieks and squeals of the strange creatures we encounter there. It's a masterclass in the importance of sound and incidental music to a TV series that plenty of other productions could learn a lot from.

Although the series is DVD-only, one suspects there isn't really enough quality animation here to even justify the move to Blu-ray, so this UK release is entirely acceptable in that regard - there's also no English dub available here, but subtitles are all present and correct and the Japanese cast do a decent job once the quality of the material they're working with picks up during its second half.

Thanks to its run-of-the-mill first half, it's difficult to heartily recommend 11 Eyes - those earlier episodes are reminiscent of so many other series which have handled a similar premise better that it seems utterly unremarkable. This is a shame, as it hides a far more proficient story buried within its depths as the show turns its narrative on its head, bringing forth brutal bloodshed and hefty psychological distress into a scenario that you ultimately come to be drawn into. If you're willing to play the long game and plough through the entire series to reach those brighter moments then 11 Eyes will provide you with a decent reward, but it's a lot to ask to overlook its failings considering the time outlay required and the simple fact that other anime can offer many of those same facets in a more compelling overall package.

7
Cut out most of its first six episodes and you have a series with impeccable sound design overlaying a brutal but engaging story - unfortunately you really can't avoid the first half of the series and its mediocrity.
LATEST REVIEWS