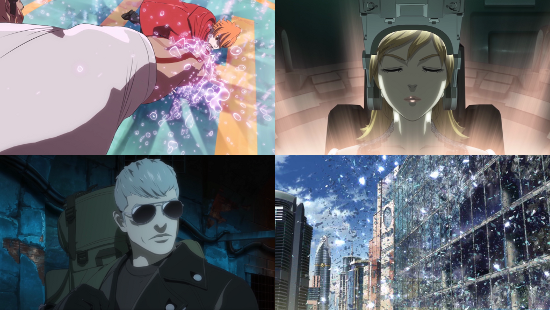 When I first heard of 009 Re:Cyborg, I was really excited. A high-budget CG film featuring the cast of Shotaro Ishinomori’s magnum opus, Cyborg 009? I love the truncated ten volume manga series that Tokyopop published and found it to be a rip-roaring adventure that still knew when to apply melodrama. It was also a product of cold war times, covered in acute war paranoia - how will 009 Re:Cyborg fare bringing it to modern times?

One by one, the world’s skyscrapers are falling. Suicide bombers, guided by an overlord known only as “His Voice” is compelling people to commit horrendous atrocities, and the world is failing to protect itself, let alone find the source. The 00 Cyborgs, former champions of justice who previously delivered the world from the clutches of evil, are called upon to face up to this menace and stop the senseless slaughter before it claims more lives, perhaps even their own.

With the synopsis out of the way, let me state that 009 Re:Cyborg is a steaming heap of garbage. Of course, I can’t simply end the review here, so let me lay out my case. I have three main arguments.

Firstly, the storyline is a meandering self-indulgent grab-bag of nonsense. Not only that, but it really, really wants to win you over to its overbearing message with a missionary-like zeal. It starts out with a reasonable hook of brainwashed individuals talking themselves into terrorist bombings, which it manages to set up and hold onto for around ten minutes before going off the deep end. The “terrorist plot was an inside job” angle suffers greatly due to how outdated it feels - it ends up feeling quaint, but this would at least be bearable to watch. It doesn’t help that the general mood at the time of writing is one of openly co-opting conspiracy theory slogans to mock them, something that makes the moments when the film earnestly presents them as truths utterly bizarre.

But no, the film can not, will not stop there - it continually bolts additional fistfuls of escalating plot elements onto itself, turning into an incoherent, wheezing chimera. You have such gems as “9/11 was an inside job”, NWO conspiracies, nuclear bombings, prehistoric angels, unending pseudo-religious crackpottery and of course the mandatory mention of Hitler and the Holocaust to invoke Godwin’s Law and complete your bingo card.

The writing is so bought into its gamut of insane ideas, so eager to force them down your throat and prove them unequivocally right at every single opportunity that in the end 009 Re:Cyborg feels more like a recruitment tool for a crackpot cult than a film. Every conspiracy is proven right and those characters who do not acquiesce suffer in some fashion for their impudence. This really sucks to watch, because it is boring. Any and all flickers of ambition or cool moments get subsumed by the endless tide of the plotline. Action scenes are few and far between, are hampered by the CG presentation (more on that later), and often interrupted by plot dumps diluting them. It also commits the sin of having the first action scene be the most interesting, setting the rest of the film up to fail as a consequence. Even in moments that should be tense or have some kind of emotional connection, the film is painfully dull because it is far more invested in its worldview above all other aspects. The nadir of this comes at around the halfway mark, where the majority of the available cast decamp to a vaguely church-like cellar and have a plot dump where a character exposits about what another, not present character found and conjectured about some of the events occurring. A very close second is the concluding scene of the film, where everyone struts around like prize game hens, cooing directly at you about how the message of the film is right and good and All Is Well Now, and it is utterly disgusting. Not one second of this self-congratulatory drivel was earned in the proceeding 95 minutes, and is then topped off with an inane stinger.

Another issue is that the movie assumes you are already familiar with Cyborg 009 as it makes zero effort to introduce the cast or give any kind of context to their background, abilities or organisation. It was confusing enough as a returning fan to recall the identities of the core cast so I fear to think what it would be like for someone with no prior knowledge. Disc two has an oddly self-aggrandising short “special prologue” chapter that provides a very brief history of the franchise and an outline of the cast for the curious, but is still somewhat shallow.

However, that may in fact be a blessing, given my second issue with the movie - it utterly wastes the Cyborg 009 property which it has taken hostage, put a gun to its head, and forced to put on this dog and pony show of a movie. The cast are shackled to the ridiculous plot, often acting against character and their own best interest, turning them into ridiculous shadows of themselves. This gets worse as the film goes on as the cast abandon being actual characters and you get to see them brainwashed into being mouthpieces for the ridiculous plotline that the creators really, really want you to care about. Cyborg 009 is a cool franchise, and to see it twisted to this end feels, to me at least, like I have been hoodwinked. Francoise, the single female of the team, starts out with what looks to be a strong, interesting role until she turns first into a sex pot, then a fawning damsel, then into a brainless hanger-on. Multiple interesting characters are removed from the storyline entirely just as they are threatening to do something interesting. Professor Gilmore comes across as the most inept “smart” man present, and 001 does nothing but sit in a high-chair... oh wait, 001 is an actual baby and that’s normal for him. He gets the best representation in the film.

The unforgivable height of this comes when the movie has the temerity to rip off the original ending of the Cyborg 009 manga and ham-fistedly partially recreate it. That ending, a classic scene dripping in pathos in its original form, is utterly unearned by this film and it is an insult that this film thinks it can aspire to such a grand height.

Thirdly and finally is that, even if you could look past the previous two points and go in just wanting to see a CG spectacle, the execution falls flat. Sure, the CG looks fine, good even, but never excels beyond being workmanlike in its craft. This is particularly painful in the action scenes, where the combination of the Cyborg's superhuman abilities and the bombastic setups should provide something of interest but fall flat. The opening scene sums this up the best, where a series of skyscrapers are toppling over into each other: the whole presentation feels sterile, clinical. There are shattered windows and falling glass- a whole scene is laid out but it looks like a low-framerate CG cutscene from a previous generation video game - you can see buildings looking utterly static until another building dominos into them and -bing- the internal programming fires and they state transition from “happy building” to “building in strife” and go through the motions of falling over in a very exact, controlled fashion. There is no dynamism to the CG, no life. Everything happens within precise constraints and without any flair, something which is especially damning in fight scenes where this combines with a general sluggishness of movement to provide an uninspiring sequence of actions. Even things that you know should be cool, like someone jumping off the walls of a number of skyscrapers, provide no snap, no verve. The low framerate constantly hurts the presentation as well, as even pans over static environments seem to have in-between frames missed out as the camera sloughs around. This disappointment is heightened by the times when there are drawn backgrounds, which look utterly gorgeous and lay a full colourful scene out in front of you for you to marvel at. Sadly these moments are in the minority and only help to show up how mediocre the CG visuals are. As an addition, you really should watch the Blu-ray version of this film if you do want to see it. For this review I was sent the three discs from the collectors edition, and the Blu-ray version of the film is a massive step up from the passable but blurry and detail-starved DVD.

There are other, lesser issues in the production and the release itself - the opening credits look painfully amateurish, and the subtitle track has a number of small issues such as typographical errors and grammatical goofs. The grammatical errors in particular are bizarre as they almost approach an attempt at communicating an accent in certain members of the international cast, but these flourishes only tend to last for a line or two in this overly wordy film, making them feel more like an error rather than something intended.

Instead, you can watch the dub, which is very good! The level of performance varies between characters, but is on average much higher than your typical anime dub. They even (mostly) get decent accents on the characters! Sadly the things the characters are saying is still tripe, but that isn’t the dub’s fault. There is also an interview with the director included on disc three of the Collector's Edition which helps illuminate some of the reasoning behind the awful plot, and is well worth a watch for the curious.

I didn’t go into 009 Re:Cyborg wanting to hate it - the film earnt that all on it’s own. Every time it plumbed further depths of its inexhaustible mine of idiotic plotting, dire conversations and dull action I tried to cut it a break and wait to see if the film would redeem itself as part of a grander plan. It didn’t, and I became incandescently, notepad-throwingly angry by the end of the film. It squanders a great property and what could have been an amazing initial premise to such a degree that it is almost heartbreaking. Please, don’t waste your time on it.

Disc 1 - Blu-ray, contains the film in 5.1 English and 5.1 Japanese with English subtitles. Film is viewable in both 3D and 2D formats.

Disc 3 - DVD, replicates the bonus content from Disc 2 and includes a set of Behind the Scenes content. This consists of a set of subtitle-only “making of” short films looking at the animation, music, an interview with the director, and recordings from a pair of premiere film screenings.