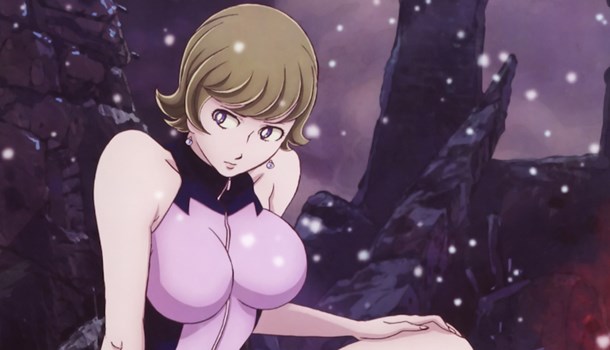 Going back to the review of the first volume of 009-1, it might seem that I went off on one (interesting terminology - Ed). Perhaps I was too harsh? Lets find out if the next 2 volumes can dig the series out of its rut...

Volumes 2 and 3 continue to focus on Mylene Hoffman (009-1) as she continues on her missions for the West Block and their intelligence gathering against the East Block. More of the same to be sure.

The serire continues the 60’s James Bond theme, with the gadgets, the missions and the Cold War feel to the entire series. The problem is, while the series has a distinct style, the animation can be pretty rough in places.

The main problem with 009-1 is that the series is just not fun or interesting to watch. While other espionage series’ have exciting storylines, 009-1 is filled with ‘mission of the week’ style episodes with some underlying arc. The problem is that nothing is at all exciting, and clock-watching became the main activity for each episode.

To be fair, 009-1 does try to inject some emotion into proceedings, fleshing out the characters in an attempt to create empathy, but in the end it all becomes very forced, and I found myself rolling my eyes rather than drying them, especially when the machine gun breasts come out. (I wish I was joking about that part).

Admittedly what is here is an improvement on disc 1, but in the end it never raises its game above being distinctly average. 009-1 is dull, cliched and has very few redeeming features, all of which add up to a series you're better off passing over. If you're looking for a 3 part secret service anime, try ADV's superior Mezzo DSA.

Extras-wise 009-1 does deliver. As well as the usual extras, there is a huge amount of content for those who are into the series. Along with weapon and gadget bios, a pilot video that gives an insight into the world of the series and even a look at 9 of the agents. Extras also include a collection of Japanese adverts, as well as a making of the character 009-1 and even the DVD case contains info on the series and interviews with the creators.

5
A very average series at its best, a major disappointment.
LATEST REVIEWS