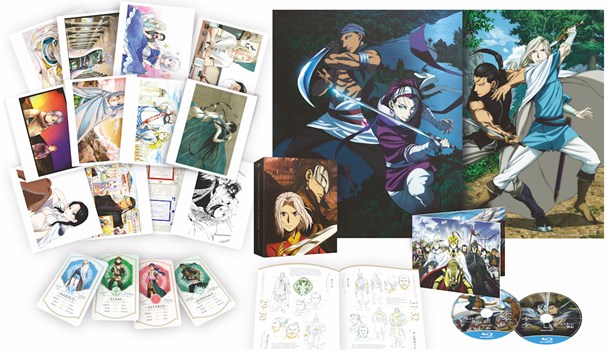 
With their release of Seraph of the End Season One Part Two still on track for its own early December release, this morning grants us an opportunity to take an exclusive first look at the packaging and contents of Universal Pictures' forthcoming release of The Heroic Legend of Arslan Series 1 Part 2.

This release will be arriving on Monday, 26th December, with both the DVD and Blu-ray Collector's Edition SKUs containing 12 art cards, character cards, a double-sided poster and a 100-page book featuring character profiles, background info and artwork. Pre-orders for the release are already available on Amazon, with other retailers to follow.

If that's whet your appetite sufficiently, you can also take a look at a 3D packshot of the release's outer box below - again, click for the full size image: Meanwhile, details have now been confirmed as to how to get hold of the bonus character card that will be exclusively available from certain retailers and events for both Seraph of the End and The Heroic Legend of Arslan's second volumes.

These bonus cards will be available from both Universal Pictures and Anime Limited at events such as the MCM Comic Cons, but can also be picked up online if you pre-order at Zoom, United Publications or Anime On-Line.

If you want to pick up a copy of Seraph of the End Season One Part Two with the bonus Ferid Bathory card, you can do so at the links below:

We'll add pre-order links for the second half of The Heroic Legend of Arslan's first season once we have them.