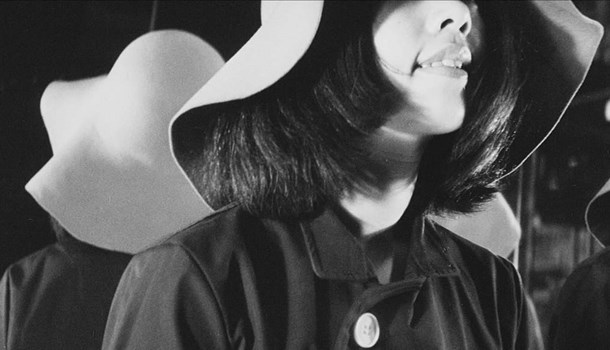 I’d be a liar if I said I knew a lot about Pink films beyond the general connotations of Pinku. True, I’ve seen a few films that seem to get bunged under the pink category, not realising that – according to my extensive Wikipedia research, all of two minutes of blood, sweat and tears - traditionally, pink films are “a category of Japanese pornographic film made by independent studios for release to adult theatres. In the strictest definition, it does not include movies made by major studios” (citation to Jasper Sharp). Other genres more properly described as, pinky violence apparently being more precisely referring to films put out by Toei, and roman porno, by Nikkatsu (who rebooted recently, with only Sion Sono’s Antiporno getting a UK release and as the name suggests, he messes with the genre – though nevertheless explicit if anarchic).

This may lead one to think that the two films that comprise Pink Films Volume 1 and 2 are going to be salacious, pornographic entities when the reality is quite the opposite. If anything, of the two films, the first: Inflatable Sex Doll of the Wastelands (1967) is more in keeping with Seijun Suzuki’s masterful Branded to Kill, and the second, Gushing Prayer (1971), feels more in spirit with Japanese New Wave films of the late 50s, or European arthouse films of the time it was made. (Gushing Prayer in particular made me think that it would have garnered arthouse acclaim had it been the work of an established European director.)

But anyway, what’s this all about, eh?

Inflatable Sex Doll of the Wasteland (now if that title doesn’t draw you in what will?) has an assassin, Sho, brought in by a property investor to face off against the men who sexually assaulted his mistress. Only for the assassin to find he has his own grudge against the kidnappers.

In Gushing Prayer, 15 year old Yasuko is persuaded into prostitution by her three friends as a means to understand their communal sexual desensitisation, and in response to their sense of societal alienation.

Really, both films defy writing up a nice, clear synopsis because the "What They Are About" of the story is mainly superfluous, and often entirely misleading. In Gushing Prayer, the idea of a 15 year old being persuaded into prostitution makes you think you are about to witness the grimmest 70-odd minutes of film this side of [insert the grimmest film you can remember watching]. The reality, again, is very different. What sounds filthily distasteful is handled in many ways very carefully. Yes, we have some nudity, even a bit of four teenagers (and no, none of them appear to be teenagers by any stretch of the imagination though the cast do look young) investigating group sex is neither erotic nor particularly sexualised. If anything these scenes revolve more around their conversations as to why they don’t find sex exciting (they talk a lot about “beating sex”, a term I found slightly baffling) and really you think that they are talking about beating the world, because they all give out proper alienated teen vibes. All the way through Gushing Prayer there are quotations relating to teenage suicide. Not very pornographic. The characters in the film reminded me a little of the flappy teenagers in Robert Bresson’s dreadfully dull The Devil Probably in that the teens seem lost in their own perpetual cycle of self-absorption (the suicide references also added to that though unlike Bresson’s film, where you are desperate for it to end, Gushing Prayer is actually worth watching).

Though there is a fair amount of mainly harmless nudity, if anything Gushing Prayer is a very talkative film. Even the group sex moments are likely to linger on Yasuko’s friend, or her boyfriend, Koichi, as they discuss why it is she doesn’t enjoy sex, or being horrified at the thought that she might enjoy sex. If anything the idea of enjoying sex seems unfathomable to them and again it seems to be they are talking about life, not sex… how can one enjoy life? Again: why can’t we beat life?

Then again, I’m not sure if I got the film at all, but you suspect to an extent that’s the point. Interestingly, the director, Masao Adachi, was quite left wing and stopped filmmaking and took off for nearly three decades to Lebanon. It is no surprise as Gushing Prayer feels like a political film and one where the director has the opportunity, with censorship relaxing a little,  to show sex and nudity on screen, tools which Adachi utilises whether or not they are actually needed. And if you want to put shock into a story, then what better way than a 15 year-old girl prostituting herself? Even then it’s handled very matter-of-factly. We see her given money but don’t see anything particularly sexual with her clients (except on one occasion) and then they seem about as bored with it as she does. Adachi, you think, is making a point about society. It’s just hard to pin down what that point is. Arguably that’s OK, think Hamlet, no one can agree if he’s mad or a calmly calculating bastard.

Nevertheless, Gushing Prayer is quietly compelling – not a masterpiece, not overly visual, though it moves from black and white to occasional uses of colour, sometimes slightly psychedelically; mainly the film draws you in by underplaying everything. Yes, some of the teenagers you think just need a haircut and a job (yeah, I’m old, you know) but it’s really a welcome release because it’s genuinely different and looks fantastic on this restored print. The black and white photography is magnificently crisp.

Now I am assuming you’ve seen Branded to Kill. Though if not. Fix that. Right now. Trust me, you should. You’ll thank me for it.

OK, moment of (albeit virtuous) proselytising zeal over and done with, that Yamashita was involved in Branded to Kill is no surprise as Inflatable Sex Doll of the Wastelands was released just a few months after it and both cover some of the same storytelling ground, as well as some of the stylistic and storytelling elements of Suzuki’s work. Now I love Seijun Suzuki, so if I see a pale imitation I may balk at it, but thankfully here we are presented with what is almost an alternative take on Branded to Kill, though perhaps not as coherent. That said, anyone who knows Branded to Kill will know it’s not the most straightforward of films (Jasper Sharp, introducing a screening of it at the BFI said when he first watched it, he had no idea what it was about, and even years and multiple views later, he still had no idea what was going on). Like Branded to Kill, Inflatable Sex Doll of the Wastelands can sometimes take a rather elliptical approach to the narrative – some might just say incoherent but I’d disagree; it seems a choice, where the director can, like Suzuki, he omits establishing shots or those short scenes that act as bridges, so sometimes you’re never quite sure where you are physically or narratively. It’s a bit like watching David Lynch at his most opaque, even if you are not always sure if you know what’s going on, you feel like that Yamashita does and that there is sense behind it. There’s control behind the dreamlike narrative.

It’s not all easy, though; if you can follow the plot and accept the jazz soundtrack that is anything other than easy listening – it has the feel of a director who has managed to get his favourite avant-garde jazz band to produce the score and his advice was "go crazy" (actually it really suits the film and is really good, full stop).

It does have some issues that you have to address. Like Branded to Kill, there is a level of sexual violence, which in both films is presented on film within the film. In Branded to Kill this is done with the effect of disturbing the protagonist. In Sex Doll, it’s all a bit different. In part it’s almost used in an absurdist way. Unlike Branded to Kill, which presents some depth of characterisation (to whatever level Branded to Kill can, considering its nature), women tend to be reduced to mere objects in Sex Doll. That doesn’t mean that any nudity or sexual violence is meant to be palatable or else women are objectified, Sex Doll is mainly a film about men’s reaction to women. (Or so it seemed to me.) They are, rather, sex dolls. That all said there is very little sex in Sex Doll. Again, anyone after anything salacious, sensual and well executed, go and watch The Coming of Sin by Jose Ramon Larraz (which, I found out, makes an excellent if impromptu double bill with Eyes Wide Shut, which has aged remarkably well from first seeing it as a disappointed Kubrick fanatic).

Admittedly, part of me wonders if you watch Sex Doll without having seen Branded to Kill, whether or not you’d get as much out of it. I can only say I found it a compelling and stylishly made film. Still the print is grainier than you would expect, and in need of a bit of restoration – true it doesn’t hit the lows of the last restoration of Metropolis (then that was sitting around for 80 years, see how well you’d do) so unlike Gushing Prayer which is nigh pristine, Sex Doll is not. Still, I’d rather have Sex Doll as is than no Sex Doll (hmm, taken out of context that might raise more than the occasional eyebrow).

Overall, another real return to form by Third Window, after a bit of a drought of releases. Even before seeing these I pre-ordered Pink Films Vol 3 and 4 (not to mention Tsakamoto’s latest) and glad I did. It bodes well, and also goes to prove that giving genres or forms a broadbrush description can lead you to avoid films that are better watched than not. (There’s a rant on that topic from me that shall, you’ll be glad to know, not be indulged here…)

8
Whilst not for everyone, for those with a taste for the interesting and - at times- challenging, Pink Films Vol. 1 and 2 is an obscure gem
LATEST REVIEWS