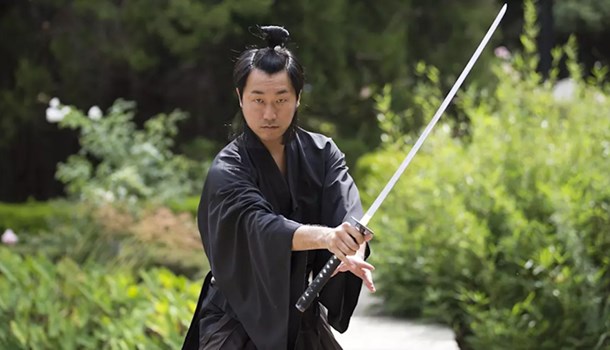 
Top Knot Detective is a film you want to love - really love. An Australian mockumentary that tells the (fictional) story of a once shown but never forgotten  Samurai drama: Ronin Suiri Tanta, or "Top Knot Detective" as the show was titled in Australia. The premise of this imaginary show was that it was moderately successful in it's native Japan, but found cult success in Australia. The "show" featured robots, flying tiger sharks, time-travelling baseball players and alien invaders. So daft it could almost have happened...

Des Mangan (Yes, Des Mangan, you know, who starred in episode #430 of Sons and Daughters as a workman - classic one that) narrates the turbulent history of Ronin Suiri Tanta and it’s enfant terrible star, writer and director Takashi Takamoto (Toshi Okuzaki); Des exuberantly details Takamoto’s affairs, run-ins with company execs, conflicts and friendships with co-stars, crew all the way up to his inevitable crash and burn.

It’s become a cliché that any mockumentary will be tested on the Spinal Tap scale of 1 to 11. And TKD has it's moments, if only because you feel that writer-directors, Aaron McCann and Dominic Pearce have a genuine love for this cheesily dubbed, over the top samurai drama. McCann and Pearce clearly know their stuff as demonstrated by their construction of imagined scenes from the nearly mythical series - it's easy to see them as teenage boys sat round a small 4:3 screen TV, desperately embracing every moment of some mad, bad and shamelessly advert-filled samurai show.

McCann and Pearce’s Ronin Suiri Tanta is a TV Samurai vehicle for an "a bit of everything" corporation, Sutaffu which is utilised to advertise their products, make money from their idols and generally rake in the profits from unutterable televisual nonsense. This is achieved with the head of Stuaffu giving Takamoto carte blanche to create the show, allowing him to create a wild show themed around revenge.  Reality and television collide as Takamoto’s Samurai, Tantai, is pitted against his nemesis who just happens to be played by Haruto Koike (Masa Yamaguchi), who is the heir to Sutaffu!

Really, can you see this ending well?

Treated to the sort of grainy images you only find on fan-recorded VHS, Ronin Suiri Tanta is shown to us as a maelstrom of insanity: illogical plots, a raging penis monster, absurd (and absurdly cheap) special effects, swordplay that even your most insane bullet chopping anime would be embarrassed to sell you and in the midst of all of it is the monstrous character of Takamoto himself.

Takamoto’s character is described in a series of talking head interviews and archive footage. Much of the this footage comes from the vintage Sutaffu show, full of slapstick sound effects and onscreen overlays. Takamoto often indulges in wild, egotistic streams of consciousness that are often barely coherent. He'll line up his views on relevant topics and then undercut himself with an absurd conclusion (“women need to be better represented in the media, and who better to represent them than me!”). Almost every time Takamoto starts to talk sense you can see the payoff coming - you know some horrifically vainglorious embarrassment will emerge.  It’s painful to watch but hard to tear yourself away from. Takamoto is a train wreck of ignominious self-congratulation: he is the genius behind Ronin Suiri Tanta! Nothing else compares!

The talking heads, as with any good documentary, start to strip bare both the nightmares behind Ronin Suiri Tanta - the conflicts between the actors and crew - as well as the affection some still hold for Takamoto. It’s nicely judged because it’s not just a nightmare-fest. The producer remembers Takemoto fondly and considers him misunderstood. Even idol-cum-actress girlfriend, Mia Matsumoto (Mayu Iwasaki) talks about Takamoto with demure kindness, even though her story is tragic. She practically overlooks Takamoto’s key role in his thoughtless, almost inadvertent destruction of her career.

But then Takamoto is a boozing, womanising mess who cannot see beyond himself and his assumed genius. Co-star Sutaffu heir Koike (and others) happily talk about their frustrations with Takamoto, describe how difficult and unpleasant he could be, and offer what (you assume) is probably the most balanced and realistic view of the character. However, things then start to take something of a dark turn, as any such documentary should…

In the film, the dark turn in question is the Japanese economic miracle collapsing (metaphor anyone?) and for me it felt like a necessary inclusion. It gives us a shocking dose of reality as well as providing the film the legs it needs to last. Though relatively short at only 86 minutes, Top Knot Detective does struggle a bit at times to fully reel you in.

The directors really nail the details that required to keep your interest though. The snippets of convention interviews, with their: “yeah, Ronin Suiri Tanta I remember that show, mad as hammers”, really get across the familiar feeling of fans becoming enthused as they suddenly get a chance to blub about their favourite forgotten series. The madness of the onscreen advertisements that suffuse Ronin Suiri Tanta are great, one scene in particular is spot on; Takamoto, as Tantai, finds a kid smoking (cos they smoked Sutaffu cigarettes then didn’t you know). He smacks the kid insanely – it’s horrifically violent, though more is inferred than shown, and of course Takamoto then faces the camera with the key message - it’s bad to smoke kids, but it’s OK for adults - and adults only smoke Sutaffu!

The issue for me was that I couldn't feel as invested as the directors in their creation. Their attention to detail is wonderful, and their love for this project is palpable. Even though I didn’t see Ronin Suiri Tanta on TV in my youth (well, none of us did), I feel like I’ve seen it thanks to the clever worldbuilding here... but I just didn't care about Takamoto. He's a monstrous figure for certain, but I think there’s only so much monstrous I can tolerate. I found myself losing interest in him, and when that happened I was coasting on the directors love and the enthusiasm. If Takamoto had been a figure I’d grown up with then maybe I’d have felt more invested in his character, but as it is I just kept wondering why anyone would ever give this idiot any money to do anything? I wanted to slap all involved.

Yes, Takamoto's in-universe celebrity and notoriety is what Sutaffu bank on, but you can see the disaster coming a mile off. Also, the supporting cast, though very well played, never quite capture the imagination. It’s all very well nuanced in terms of script, performance and direction but I could just not fully immerse myself, at least until the infusion of Japan's Bubblegum economy crashes the party.

All that said, there's a lot to enjoy in Top Knot Detective, and kudos to all involved. As a fictional reconstruction of 90's trash samurai drama, the film is often inspired and there’s so much enthusiasm it's genuinely uplifting. The real pleasure is the detail: actors walking away in shots of the fictional show when they're supposed to be dead, only to reappear as an obviously breathing corpse is delightfully daft (in the same vein as Garth Merenghi's Darkplace). Equally, it’s a pleasure to see Third Window Films return from their drought with a genuinely pleasing release, even if McCann and Pearce aren't quite at the same subversive level as Sion Sono or Shinyua Tsukamoto -  but then who is?

If you're looking for a cure to the lockdown blues, nobody does it quite like Takamoto - long live Takashi Takamoto!