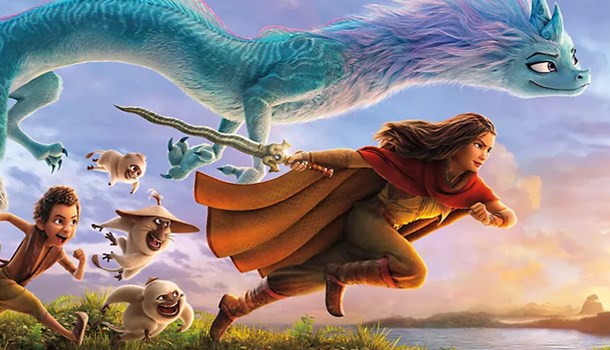 Centuries ago, the land of Kumandra was at peace, presided over by a race of powerful dragons until, in a desperate attempt to ward of a malignant force known as the Duun, the dragons sacrificed themselves to protect the world.

500 years later mankind has split into 5 factions, each of which distrust the others, a situation that only worsens when an attempt to broker peace by Raya’s father results in betrayal, once again unleashing the Duun upon the world. Now Raya must begin a quest to discover if there is any truth to the legends of the lost, last dragon Sisu and see if there is a chance for both her father and the world to be made whole again.

If I was a cynical person I might say that there was a pattern emerging here. Raya and the Last Dragon is, after all, the second film to be put out on Disney+’s Premier access following last year's criminally underrated Mulan. Both are films with entirely South-East Asian characters (ethnically at least) focused on strong, powerful warrior women out to save their countries...hmm…

Cynicism aside, Raya is of course the latest film From Disney Animation Studios and their first release since 2019’s Frozen 2. The big question of the day however is if the film captures that great Disney magic, and is it worth dropping your hard-earned pennies on now or wait the long 3 months till it drops off Premier Access?

First things first – this film looks incredible - as in jaw-droppingly incredible. Every shot of the film looks utterly sumptuous and this is clearly a huge leap forward for the quality of visuals that Disney can achieve as every hair, water drop and even dust effect is rendered perfectly whilst the characters themselves are more expressive than ever. This is the kind of film where you wish they were still doing these on cels so you could buy them to put on the wall (we’re watching out for the film's art book already…)!

Backing this up is a fantastic soundtrack which eschews the traditional Disney princess songs for a more orchestral affair which just soars through the film, particularly in the finale. Composer James Newton Howard has really earned his pay on this project!

Over on the story front however, we must admit things are a little less cut and dry and it’s here where Raya falls a little short.

The plot is a classic quest storyline as Raya seeks out the films maguffins, gathering a party to her cause as she goes and facing up to her own shortcomings to find a way to save the world - and that’s all really great. Raya and Sisu are the heart and soul of the film as they should be and they absolutely shine here. Awkwafina brings the same sas and energy to Sisu as she brought to Peik Lin in Crazy Rich Asians and she basically functions as a female version of Robin Williams' Genie from Aladdin. And unlike another actor who attempted this not too log ago, she pulls it off, which frankly is high praise! Meanwhile Kelly Marie Tran, replacing the originally cast Cassie Steele, as Raya (one wonders if this was in part an olive branch after the terrible way she was treated over Star Wars…) and she gives Raya a genuine strength that allows the character to carry the film.

The issues lie not with them but in the side cast and the way the film appears to have been forced to sacrifice parts of itself in order to include them. You see, whilst we certainly have no insider knowledge, it seems painfully clear that the film originally had far more interaction and a much bigger character arc between Raya and the film's antagonist, Namaari. A lot of this remains but whilst their spectacular fight scenes are glorious to behold the rest is so truncated that the nuance the relationship needs feels lacking.

One rather suspects the directive came from Disney to cut out what could well have been a romantic aspect of the characters relationship (enough is left in the subtlety’s of the animation to suggest this was the case) and instead to allocate that time to...sigh...comedy sidekicks. Their sole purpose is seemingly to pander to the little kiddies who can’t go 30 seconds without dumb physical comedy to keep them entertained. It doesn't hurt toy sales either, the same reason that Sven, Olaf and Kristoff were in Frozen 2 so much despite having no impact on any of the important plot beats).

The thing is that Sisu is already the comedy sidekick, so adding another SIX is just utterly superfluous. Benedict Wong’s Tong (stop laughing you dirty minded people, you know who you are...), at least brings some depth and slightly subversive dialogue to the table but the rest, consisting of a young boy chef and three monkeys accompanied by a toddler who isn’t old enough to speak but is somehow magically able to understand how to be an expert thief and follow complex instructions, are just such obvious and unnecessary fluff. Frankly they aren’t really very funny either.

The end result when you add it all together is that Disney could have had a spectacular, genre defining film, but instead they chose to take a path that adhered more closely to their tried and true formulas. That’s not to say the end result isn’t good because it’s really good, certainly the best from the studio since 2016 brought us that glorious tag-team of Moana and Zootopia, and you will definatley find a lot to like here. It’s just that you will also be left wondering how it could have turned out if Disney hadn’t played things so safe.

7
Disney's newest princess is ready to make you love her - at sword-point if necessary!