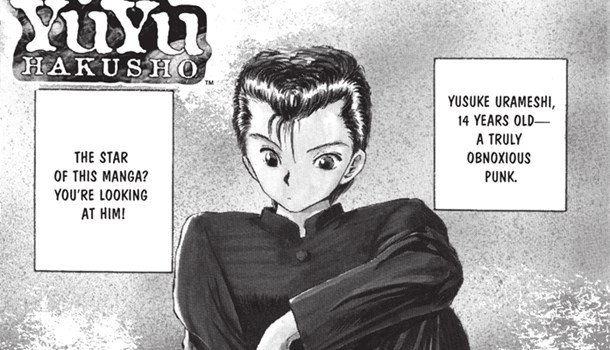 Yu Yu Hakusho is the story of tough teen delinquent, Yusuke Urameshi. One day he performs a selfless act that changes his life, by ending it. Due to the nature of his death he is allowed to return to his body if he performs enough good deeds, and this is what Volumes 1&2 of Yu Yu Hakusho are all about.

It is an original idea because of the way Yoshihiro Togashi, the creator, uses his subject matter of spirits, demons and various other elements of the occult in a light hearted way instead of the usual dark way we see.

I am personally not a huge fan of the in my eyes ‘old-fashioned’ style of artwork that Yoshihiro Togashi uses. But when reading Yu Yu Hakusho I found that my feelings towards his creative style changed considerably. The designs of the characters are well suited to their personality, which along with the dialogue makes them seem life-like in many ways. The way in which the battles a drawn is also excellent with the movements of the combatants flowing from frame to frame, covered with the appropriate amounts of body deformity to keep the action flowing along with blood and detailed bruising to give a believable representation of fighting.

Story wise I really enjoyed the first three chapters of Volume one, because of the fact that the main character dies in the fist chapter and is introduced to the at first confusing life of a Spirit and the rules of the Spirit Realm. Then the rest of Volume centres on Yusuke performing good deeds to be able to be returned to his body. There are also some quite comical moments such as when Yusuke finds out he was not meant to die when he did and also when he possesses Kuwabara. Volume two really fleshes out the beginning of the love story of Yu Yu Hakusho and ends with the true beginning of the main story with Yusuke about to become an Underworld Detective. The first two Volumes serve, as a much-needed back-story that if it was not shown in the way it has been and the manga would be very confusing indeed.

Even though the premise and the battles (particularly the ones in further volumes) may seem childish and DBZ-ish for some people, I personally find the story and characters engaging and the representation of the gang lifestyle that some of the characters lead refreshing in a genre filled to the brim with two-dimensional characters and plotlines that go on and on with no end in site.

8
The beginnings of a great action story coupled with great characterisation.

Written by Spike Spiegel on 01 Jan 2002
LATEST REVIEWS
My Friend's Little Sister Has It In For Me! (Vol. 4)