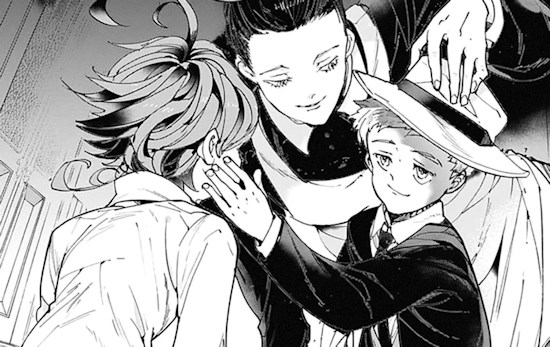 The year us 2045 and the scene is set at an Orphanage where one adult, known as Mom, takes care of 38 children ranging from babies to 11-year-olds (age being a key plot point as it turns out later). Other than the fact it would actually be near impossible for one person to care for and educate so many children alone, everything appears normal at the outset - the children enjoy playing tag in the gardens, love Mom and perform well in their daily ‘test’.

Although the children are happy living with Mom and view each other as siblings, they still long for the day that they will leave the Orphanage and be sent to live with an adoptive family. In volume one this happy occasion comes for 6-year-old Conny who is escorted out of the Orphanage by Mom to meet her new family. Unfortunately she forgets her favourite toy and a couple of the older children (Emma and Norman) decide to reunite her with it, even though this means that they are forced to pick the door lock to get out to the front gate.

What the children see at the front gate will turn their world upside down in an instant, as rather than seeing Mom waving a tearful goodbye to Conny as she leaves with her new family, they find Conny’s lifeless body and are forced to watch as this is handed over to a demon that refers to it merely as ‘merchandise’. Emma and Norman make it back into the Orphanage, apparently un-discovered but with their world is shattered! From additional information they un-earth it becomes apparent that all the children are merely being raised as food for these demons and their daily education and testing only serves to grow their brains and make them more valuable.

Although the children have no knowledge of what dangers lay in the outside world, they quickly become resigned to the fact that they need to quickly escape the orphanage, as they also discover that they are sure to be ‘shipped out’ on their 12th birthdays which are fast approaching for Emma and Norman, as well as their friend Ray who they choose to involve in their escape plan.

The rest of these volumes follow these three older kids as they attempt to hatch a plan for escape, discover more about Mom, the demons and the outside world, whilst confiding in some of the other children the details of their discovery. Things aren’t easy though, as Mom becomes aware of the children’s plot, brings another adult in for security and always seems to be one step ahead of them. Not to mention the fact that Emma is determined to escape the Orphanage with all of the children, an idea not wholly supported by the other older children.

To be honest, I didn’t fully look into what I was getting when I picked up these volumes on a whim in a 3 for 2 offer in Travelling Man. Thinking I was getting a tale of the trials and tribulations of growing up in an orphanage, I was as shocked as anyone would be when I was faced with an image of Conny’s lifeless body right there in chapter two! Intrigued rather than deterred by this plot twist, I became enthralled and couldn’t read on fast enough. Although the key characters are all highly intelligent and skilled (thanks to Moms efforts to grow their brains) they are distinctly different which causes conflict as they work together, but this is key to keeping the story interesting. There are also many other twists and turns in the dynamics, even within the first two volumes that I wouldn’t want to spoil for you.

The artwork, from Posuka Demizu, is excellent with clear, interesting characters and as much variation as you can have between children in such a setting. The dialogue is really well translated and dialogue is easy to follow (unlike some manga where it can be tricky to figure out who is saying what).

The anime for the series has also just been released so you can find that on Crunchyroll if you like the sound of the story but don't want to invest in the manga. For me, I'm keen to keep reading. What awaits the children on the other side of their orphanage walls is still a mystery, but I want to continue my journey with them and am crossing my fingers that they will make it into the outside world where I imagine even bigger adventures await.

9
A story that's wonderfully realised, with twists and turns in every chapter!