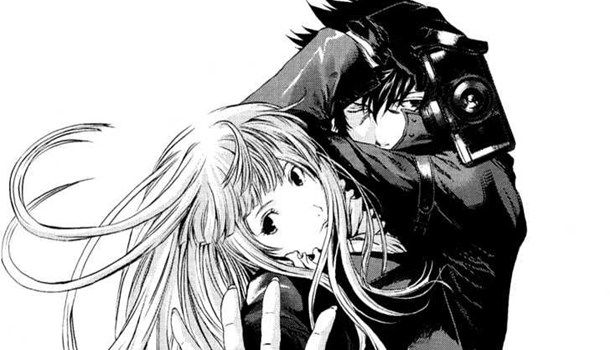 Speed Grapher is set ten years after the Bubble War. The divide between the rich and the poor in the world has become even more prominent. The rich seek to satisfy their desires and Tokyo has materialised into just the city to provide the goods. Saiga, once a war photographer, works for Hibara Ginza in the capitalist state of Tokyo. He infiltrates the Roppongi Club, a secretive organisation that is located in the red district of the city, to collect information about them. However, he is caught in the process and brought forward to a girl called Kagura who was in the middle of a ritual. This contact with Kagura awakens a special ability within Saiga. The power to make things explode once photographed. Saiga begins a solitary battle so as to unravel the mystery behind the Roppongi Club and this “living goddess”, Kagura.

Speed Grapher is about a guy whose camera blows up whatever he points it at. Now, it sounds absurd but it actually makes for quite an interesting story. Now, the first thing that hits you when it comes to Speed Grapher is the art. It’s beautiful, and although the art is all quite dark, it flows wonderfully due to good panelling. Also it’s gory, and I mean real, anatomically correct gore that despite being a little shocking is, in its own way, quite beautiful because of how detailed it is.

As for the story itself, the first volume of Speed Grapher is basically the first 6-7 episodes of the anime condensed into one manga. This results a very fast paced read. However there are quite a lot of changes, such as the rubber-man having more focus and some very big changes that might upset fans of the anime if they’re expecting the manga to stay 100% true to the anime.

On the downside though, Speed Grapher does come across as just another action manga. At times the bad guys feel like cardboard cut outs, and of course there is the obligatory young girl sidekick. There is nothing necessarily wrong with this, it just feel a little unimaginative. Also, some might find Speed Grapher a little confusing and hard to follow due to how fast paced the manga is, an although I personally found the high-paced action highly enjoyable, I do think that Speed Grapher probably works better as an anime rather than a manga.

7
It's not a million miles away from any other action manga, but it's a competent series

Molly hasn't written a profile yet. That's ruddy mysterious...
LATEST REVIEWS
My Friend's Little Sister Has It In For Me! (Vol. 4)