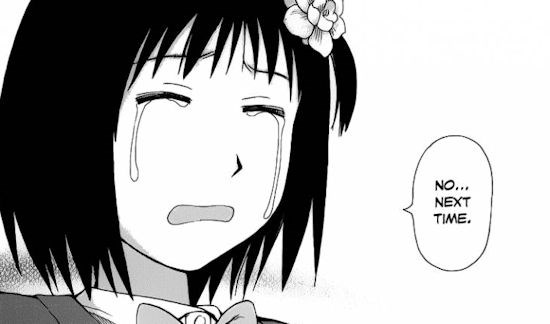 One of the main reasons I was excited when JManga initially went worldwide was that they were releasing the series “Soredemo Machi wa Mawatteiru” (The English title is the slightly clunky translation “And yet, the town moves”), a series that I was personally convinced would never see a translation and release through legal channels. This is mostly due to the fact that the premise of the series is both initially uninteresting, but also a fake out.

Soredemo (as I will shorten it to save typing each time!) chronicles the antics of the staff, patrons, and people surrounding the Café Seaside in a small shopping arcade in a typical city. The café staff dress up as maids, but they aren't really into the whole act, much to the amusement of its few patrons. The series centres primarily on Arashiyama Hotori, an energetic airhead who wants to become a genius detective. While a crap maid and an initially flat character, Hotori is an endearing main heroine thanks to her mix of obliviousness, pep, and her pitiable plight at the hands of her snarky friends and family.

While a good initial gag, the series quickly expands beyond the somewhat stale maid café setting just as it begins to outstay its welcome. As a result, the first few chapters, while perfectly fine in their own right, feel like the weakest of the bunch due to the narrow scope focused on the café. Thankfully, things soon pick up! The show quickly expands its scope into more interesting venues and events, a lot of which will be familiar to regular manga readers, but in each case Soredemo puts its own interesting spin on things due to its great cast.

The thing that drives the comedy in Soredemo and makes it genuinely work is the characters. They all have their own personalities, motives, weaknesses and history, and all of these are used as effective springboards for comedy. Instead of having every joke set up by random wackiness (although this does make a very welcome appearance at times), situations arise naturally out of the characters going about their lives and generally making a pig's ear of it. A lot of the comedy also comes from the characters inter-relationships and how well they know each other – I'm going to use an example here even though spelling out jokes is the best way to kill them (sorry). One great scene later on has Hotori dragging her good friend Tatsuno out on a treasure hunt she initially was not interested in by telling her the trip will have male company – Tatsuno assumes she means Sanada, her crush, but it is instead Hotori's younger brother. Oops. Each character is an idiot in their own way, and how they get taken advantage of or fall victim to these shortcomings makes for some compelling situations and laughs.

This interplay between the cast and the fact that they already know each other before the series begins gives them a great deal of depth, as well as being a great source of humour for the various situations that crop up. Not every joke is an absolute winner, but even at its worst Soredemo will keep you interested.

One of the nice things about Soredemo that certainly sets it apart from other comedies is that for on average one chapter a volume it will drop the slapstick jokes and instead present a serious emotional plotline. The last chapter in the first volume in particular is a great example of this- in addition to these being genuinely heartfelt it grounds the characters a little more in reality, as well as humanises them and makes them more than just endless gag machines. These also act to expand on the characters themselves and develop grounds for future gags without causing hitches in the flow of the more comedy-oriented chapters.

Another refreshing aspect of Soredemo is that it is a comedy manga with a continuous layout - that is, it's not yet another four-panel gag strip. This really helps the jokes stretch their legs and interweave with one another, and especially benefits gags that go on for entire chapters before the payoff. This also allows for some inventive panelling - while you wont see crazy avant-garde experiments, you will see some creative use of viewpoint, detail and panel dimensions when the series makes a shift beyond pure comedy. There are chapters more focused on telling a suspense story, providing the viewpoint of a family pet, and other variations that each get thier own subtle treatment and sets them apart nicely, keeping the series fresh. The art itself is clean and uncluttered, which is great for letting the comedy come to the fore while still providing detail. Characters in particular are well stylised to be easily identifiable while remaining highly expressive, lending a great deal of punch to the script and the comedy.

After a slightly ropey first few chapters and as it grows past the confines of both the "maid café" setting and it's initially wooden cast, Soredemo is an absolute hoot. Once the series really hits its stride I found myself consuming whole volumes in a single sitting, laughing to myself like a loon and really enjoying my time spent with the cast. Hotori in particular blossoms into a really interesting character at the end of the first volume, and only gets better from there. Six volumes of genuinely amusing and enjoyable comedy is nothing to sniff at, and as I write this I can see the seventh volume has just come out - something for when my next paycheck comes in!

Soredemo Machi wa Mawatteiru is available to be read and purchased at JManga.

9
A wonderful comedy romp from start to finish with some nice surprises hidden along the way.

Elliot hasn't written a profile yet. That's ruddy mysterious...
LATEST REVIEWS
My Friend's Little Sister Has It In For Me! (Vol. 4)