(NOTE: for this review I will be covering the UK release by Puffin books)

While many anime fans will know of the 1989 studio Ghibli release of Kikis Delivery Service, not many would know that it was adapted from a 1985 novel by Eiko Kadono – and indeed, apart from a brief 2003 release by Canadian publishing company Annick Press, the film has for many been their only link to her work.

However that changed this year when Random house [via Delacorte press]  in the US and Puffin books in the UK simultaneously released a brand new adaptation of Kadono's classic series. The early episodes tell a story all too familiar to fans of the film – Kiki, a young witch, leaves her family and her village to travel to the city of Koriko, where she hopes to complete her year's training as a witch, makes new friends and start her own business; the titular Delivery service.

However, once Kiki arrives in her new city, we can see many differences from the film adaptation. In this, the first of an 8-book series, we are treated to a series of short, interconnected stories, chronicling her time in Kokori city, the people she meets and the adventures she oft times gets entangled in, rather than the single narrative offered by Studio Ghibli's adaptation.

The artwork is one of two sticking points for me with this release – gone is the original, simplistic artwork by Akiko Hayaashi instead replaced by British children's illustrator Joe Todd-Stanton whose artwork, while able to convey the elements of the story, do tend to come off as more for children than for adult readers.

Which brings me to my other problem – while many fans of the original film are of the older persuasion, it was decided to market the book via Puffin, whose releases are usually aimed to a younger target audience – add to that the fact that, due to being released by a non-manga company, its release may go under the radar of many fans.

Nonetheless though these gripes do nothing to deter me from recommending this book to fans of the films, or fans with little ones who seek a magical series of adventures. add the fact that Puffins parent company Random house has hinted that, depending on the success of the sale, we could see the rest of the series released for the first time in English, I recommend everyone to either find this book for themselves, or arrange a magical early Christmas present for your younger relative.

Ed's Note:
A Second release of the book is available from Delacorte Press, which contains artwork by Yuta Onoda, which preserves much of the original Japanese flavour. This may be the version to track down if the artwork is an issue.

9
Don't let the simplistic artwork fool you - this book will enchant both new readers and fans of the classic Ghibli film. 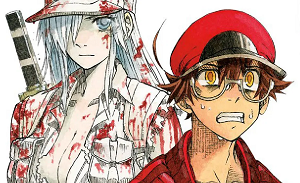