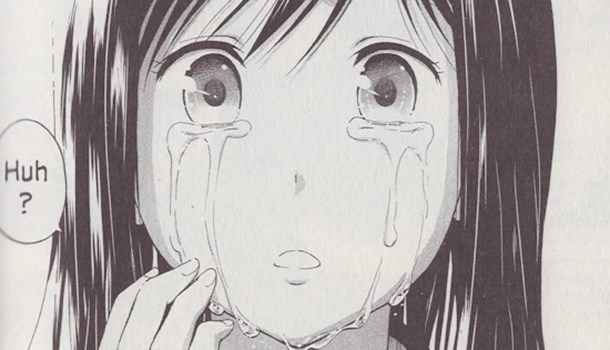 From the New World Vol. 2

Our review of the first volume of From the New World's manga adaptation left us a little baffled as to where to leave our final judgement of its merits - it tackled most of the key tenets of the anime adaptation we're already familiar with (and, we assume, the light novel from which both are derived) and did so in a proficient fashion, but at the same time it seemed determined to turn aspects of the series into what has been described in some quarters as "softcore porn". Was this simply a gimmick to sell copies of the first volume and hook readers?

Well, having seemingly gotten the sexual proclivities of its pair of lead female characters out of its system (and in fairness, the sexual mores of the world depicted in this series is an important aspect of its wider story), this second volume of the series really couldn't be any more different in tone and content, the continued wearing of tight-fitting outfits by its main cast aside.

Having been saved from their adventures beyond the Border Rope as they threatened to spiral well and truly out of hand, our group of five youngsters are all set to relax in the charge of a colony of Monster Rats who have sworn to protect them for the night before their return home the following morning. The best-laid plans of Monster Rats and men often go awry however, and when an overseas colony of rats attack their assault is as swift as it is ingenious. Luckily for the human guests of this sprawling colony, Shun quickly fathoms what is happening and takes the actions required to save himself and his friends, before powerful reinforcements arrive and seek to quell this colonial invasion.

All is not as it seems here, and as events take a crucial turn and the pressure is ramped up on the youngsters both Saki and Shun begin to realise that something is amiss - but have they realised too late? It's Shun that becomes the focus of events as this second volume comes to a close, and some of the true horrors of both Saki's previously welcoming home town and the powers possessed by humans come to light with terrifying clarity.

We used the word "horror" in that previous paragraph very deliberately - if the artwork of the first volume of From the New World was all feminine curves and flesh, this second volume is like a descent into a particularly surreal fantasy nightmare as creatures get distorted. It's truly gruesome stuff that really feeds wonderfully off the discomfiting feel of the manga's world, even if it means that this isn't a volume you'll want to flick through while you're eating your toast. Provided you can stomach it, then the art throughout is absolutely stunning - wonderfully detailed and suitably imaginative when it needs to be, while still making fantastic use of its character designs in a way that is pleasing to look at but without the overt fan service of volume one.

This is a key part in how successful From the New World is at building up a compelling vision where nothing is what it initially seems, and every safe haven is in fact nothing more than a thin veil over the reality that nowhere, and no-one, is truly safe. As all of this comes to light, the result is a breathless snowballing of events around Saki as she truly comes to the fore of our protagonist, and its intense stuff that bodes well for future volumes while also offering up some fraught and emotional moments in this. It remains a rather different beast to the anime adaptation (coming to the UK this year), but if this instalment is anything to go by it could well be an equal to that excellent series in its execution.

In other words, if you can bear with some of the shadier aspects of its opening gambit, From the New World is shaping up to be a great series that is telling a unique story in an interesting way, and doing so via some frequently stunning artwork. If it continues in this vein, this could be one of 2014's must-have manga.

8
A grotesque (in the best possible way) depiction of a fascinating story that has shaken off the questionable elements of its first volume with excellent results.