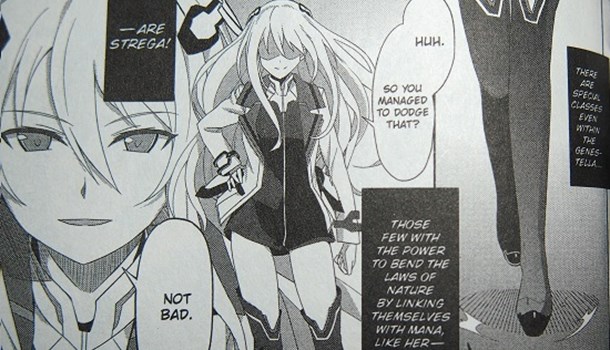 The Asterisk War has been a divisive series. The anime version of the ongoing light novel series which began streaming on Crunchyroll late last year has enjoyed strong viewing figures and decent scores on aggregator websites like MyAnimeList but while it's enjoyed public success it's also caught the ire of some vehement detractors. We ourselves at the UK Anime Network were unimpressed with the original streaming version and a great deal of argument and counter-argument has been provoked over series like The Asterisk War Sucks which take it to task for being everything wrong with the 'magical high school' genre. I have to fall in with the critics - The Asterisk War was not only an entirely formulaic anime but one with shoddy ingredients that couldn't even complete that reaction to live up to its own tropes. Battles that relied on particle effects over actual action, bland art, tepid fanservice and an overpowered hero leading a protracted tournament arc devoid of tension all made it thoroughly uninspiring. Nonetheless, The Asterisk War has still continued to enjoy public popularity so am I missing something, are the complaints more coming from petty contrarians who fixate on niggles more than the appealing bigger picture? To find out I decided to give The Asterisk War another chance with its new manga version.

The Invertia Event has upended the entire world. A powerful meteorite storm impacting the Earth brought with it strange new elements which made new fantastic technologies possible and powerful waves of radiation which irrevocably altered the human genome, creating the Genestella - a race with the ability to manipulate tremendous psychic powers. One of the consequences of the social upheaval caused by the Invertia is the growth of Rikka, a city established on an artificial island floating in the crater lake of one of the meteorites that struck Kanto, Japan. Rikka is known as 'Asterisk' due to its shape of a ring of hexagons resembling one, but it's best regarded as the home of the Festa - a vicious combat tournament where the Genestella fight against each other with their powers for the priceless prize of an unbounded wish for anything they desire. However, the fighters in the Festa are all schoolchildren, pupils of the six different colleges that are based in the academic city of Asterisk.

Ayato Amagiri is a new transfer student just arriving at the Seidoukan Academy, one of the lower-ranked schools in Asterisk. It doesn't take long for him to get into trouble though as inadvertently finding himself peeking in the boudoir of Princess Julis, one of his classmates and one of the most powerful Genestella in the city, means he abruptly finds his induction being completed via fireball! Despite being a freshman though Ayato is actually a powerful Genestella himself and ably acquits himself in the ensuing duel. This is a good thing, because both Ayato and Julis have ambitions to compete in the Festa, both having ardent desires that they wish to achieve - Ayato to discover the fate of his older sister who came to Asterisk and went missing some years ago - and despite their fiery introductions they may need to work together to achieve them, especially because an assassin hunting Julis is stalking the school grounds.

Before we go on I'd like readers to understand that the UK Anime Network does not receive review copies of manga, not even digital versions. Every manga reviewed on the site is one that the reviewer has bought with his own money. I purchased The Asterisk War for all your sakes, so you can know that I properly forewarn you that before you even take this book down from the shelf, realise that it's not good value-for-money. The chapters cover about an episode and a half of the anime (which you can still watch completely for free on Crunchyroll), and the volume itself is actually noticeably thinner than a typical tankobon, and yet it's actually priced more expensively at £10.99 a copy. If you buy The Asterisk War you're being gouged.

With limited content and an inflated price, does The Asterisk War manga do anything to set itself apart? To my surprise, it actually does! A point that I've repeated in previous reviews of manga adaptations is that the manga must offer something different than the anime to be worth your while, and The Asterisk War does rise to the challenge. Indeed, it actually responds to and fixes some of the criticisms that have been raised with the anime version in "The Asterisk War Sucks", such as dispensing with the laborious obfuscatory flashbacks and having Claudia present the remains of Ayato's sister's data to him in a more plausible way with some security camera footage, instead of the anime's conveniently cosmetically glitchy personnel file. A series of omake yonkomas in the back of the book also lampoon the story's admitted faults, like the consequences of Julis firebombing her own digs in her eeeek-baka-hentai moment with Ayato and why a princess who presumably isn't short of cash needs to fight for money in the first place. These are funny! They made me laugh! And I had to laugh again because it's definitely not what I was expecting from The Asterisk War.

The manga actually shows a lot more personality than the anime too - for instance,  during Julis and Ayato's first duel the crowd of spectators that gather in the anime are just an bunch of silent clunky CGI mannequins (with that peculiar slow-motion walk cycle that seems to persist in all crowd scenes done by studio A-1 Pictures - seriously, nothing's changed from the background walkers in Occult Academy which is from 2010), but in the manga version they're a much more bustling, lively crowd with people hopping up and over to get good views, news crews reporting spots, boxwallahs selling hot-dogs, and bookies taking odds and side-bets. Ayato's roommate Eishirou is only there to drop some character backstory in the anime, but in the manga he's something of a wheeler-dealer who offers a link to the world beyond the top-tier Genestella in the running for the Festa. A few things seem lost in translation ("The city of Rikka, better known as Asterisk" - why is its nickname longer and harder to say than its actual name?) but the text also reads well and the info-cards about the schools of Asterisk at the start of the book are also intriguing little tidbits of worldbuilding. The Asterisk War may only be in black & white but it actually is a lot more colourful.

The artwork is more appealing too. There are cute little chibi cartoons between each chapter, but it's mostly apparent in the adjusted uniform designs which give Julis a much better figure than in the anime whose anodyne body frames failed to tantalise even when it was trying rut in fanservice scenes. In the manga Julis wears a clingy minidress that tightens her to a more shapely figure, and although a pico-hem that scarcely reaches two grains below minge level is faintly ridiculous (other girls at Seidoukan Academy are clearly shown with additional skirts below this minidress in their own uniforms too, so either Julis is an outrageous exhibitionist or she literally forgot to put her pants on before going out in the morning!) it does show off her legs to give her some slender elegant grace suiting her rank... as well as a few low-angle panty shots (I'm not proud, but this is anime and a girl's gotta work that tush). This change in style does get overplayed though, most apparently in that the hero Ayato looks like he's sporting a pair of C-cups and could do with a bra. Maybe it was meant to imply that Ayato's got swole with bulging pecs underneath that Generic Anime Protagonist black cropped hair. but if it wasn't for the fact that he has trousers rather than a skirt you'd honestly think he was a girl.

I've made a lot of positive points about the manga version of The Asterisk War but despite all of them I regrettably have to say that it's too little, too late. Yes, the character art is nicer but the backgrounds are just as bland; the setting has a bit more pep but the story still goes nowhere. I'm pleased at the effort that this manga version has put in to set itself apart from the anime, but correcting mistakes that shouldn't have been made in the first place just aren't in enough number to justify the increased cost.

5
Credit to this manga for doing its best to punch up the duff source material, but it still can't make a silk purse out of a sow's ear.