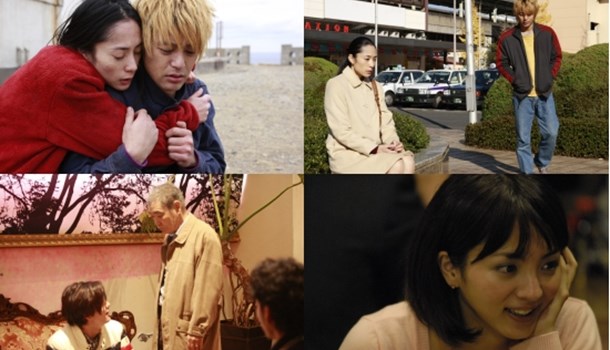 I read Suichi Yoshida’s novel Villain (aka Akunin) a few months ago under the influence of a particularly virulent ‘crime fiction in translation’ bug. I realised I’d never actually read, or even really know of, any crime, detective or procedural novels from Japan. This surprised me; were crime stories not very popular in Japan or were they just not translated into English, and what might the reason for that be? Perhaps the legal framework or cultural differences made publishers wary that British readers wouldn’t adopt them.

My quest led me to a small collection of authors including Yoshida. Hearing that the film was to be released in a few months, I started with Villain. Although I wasn’t quite as bowled over by the book as some others seemed to be, I was still quite excited to see the film.

It’s not a whodunit (the culprit/s are quite obvious and confirmed quickly); it’s not quite a whydunit either, although it has an element of this. It’s more of a ‘shockwaves of crime’ story, which almost seems to have become a genre all of its own.  There was a crime, which was the result of a number of colliding factors from the past  which will have its equal and opposite reaction in the future.

The body of a young girl (Hikari Mitsushima) has been discovered near a quiet stretch of road. As it turns out our victim was not a terribly nice person - she treated her family and friends badly. She lied to them about various things for no particular reason, so much so that she ended up believing some of them herself.

Suspect number one, a young man with bleached hair (Satoshi Tsumabuki) fills up his well cared for car before noisily driving off home having uttered not a single word. He is quiet and otherworldly, some might consider him odd, but that doesn’t necessarily mean he’s a killer.  Suspect number two is a wealthy(ish) college boy lothario (Masaki Okada) who met the victim in a bar sometime previously. He is cowardly, vain, cruel and selfish. Not a ‘good’ person but that doesn’t necessarily make him a murderer either.

Then again, it might be someone else entirely. Whoever committed the crime, it’s the people in the periphery that continue to suffer. The victim’s parents (Akira Emoto, Yoshiko Miyazaki) struggle to come to terms with what’s happened, contemplating the gap between the daughter they thought they knew and the one that the newspapers gossip about. On the other side, the grandmother of he prime suspect (Kirin Kiki) is repeatedly harassed by the press trying to get a quote; a little old lady trapped by baying mob of microphones.

This isn’t even her only problem; in a bid to ameliorate her own loneliness she’s fallen victim to a conman and so has to deal with that fear and humiliation as well as the apprehension and potential guilt of the present situation. Loneliness and the lengths people will go to escape it is one of the major themes of the film. Why else would an apparently normal young woman (Eri Fukatsu) agree to run away with a man who pressured her into an uncomfortable situation and then offered her money for her time? In the world of this film at least, the gaps between people have become so wide that they desperately reach out to anyone that will listen in any way they can be heard.

I had been anticipating something more like a conventional ‘young lovers on the run’ film, especially as advanced reviews has brought up comparisons to Badlands and They Live By Night, but the doomed love story is just one aspect of the picture. It’s pushed to the background and really de-emphasised in favour of exploring the wider ramifications of the murder on both families. That isn’t to say that the tragic love story angle isn’t played up at all, there’s heavy ambiguity about what we’re seeing regarding the connection between these two characters. Would it have been so much better if they’d met earlier, do they really have a connection or is someone being used? This could be a case of an intense situation breeding intense emotions that could change when the situation does, or it could be a case of star-crossed lovers cursed with unlucky timing.

Undoubtedly, some people will have a problem with the pacing of this film. The beginning is quite slow and it doesn’t really kick into gear until the second half. Those expecting a more conventional mystery/crime thriller will be disappointed, while those who enjoy ensemble character driven films will find the second part of the film much more interesting as Lee allows us to examine the film’s real point; the identity of villainy. Who is the villain here, how far back does the responsibility go and whose is it - does the killer necessarily have a ‘bad’ soul, can it ever really be as simple as good or bad? Not that Lee is trying to absolve the murderer by explaining the crime - of course he isn’t saying it’s alright that this person died, just attempting to reach an understanding. Perhaps there is villainy in everyone, just manifesting to different degrees and in different ways; but if there’s villainy there is also beauty as Lee shows us in the final scene.

Even if the film has some structural or scripting weaknesses, the acting standard is very high from all concerned. Satoshi Tsumabuki playing a character who hardly speaks and then is saddled with a long emotional monologue, exhibiting a fantastic talent in conveying Yuichi’s awkwardness without letting it tip over into being overtly creepy and giving a very accomplished physical performance. Eri Fukatsu also has quite a difficult task, as her character feels slightly underwritten, but she is brilliant here as a bewitched woman. Strong support also comes from the always wonderful Kirin Kiki as the put upon grandmother and Akira Emoto as the grief stricken father.

The sound design is also very innovative and adds a lot to the atmosphere of the film - closely tied to the mental state of the character in question, the soundscape immediately creates a connection to their emotional state. The score has heavy similarities to Bernard Herrman that can’t help put you in mind of Hitchcock; in fact the film has several Hitchock-esque echoes, starting out with Psycho and ending with Vertigo by way of Frenzy.

Villain may not be a perfect film, but it’s certainly thought-provoking, provocative and well worth seeing.

Villain is currently being screened in a handful of cinemas nationwide courtesy of Third Window Films - for more information on screenings in your area, check out this page

7
It may be too slow or fragmented for some, but Villain is a fascinating examination of crime and the criminal that deserves to be seen.
LATEST REVIEWS