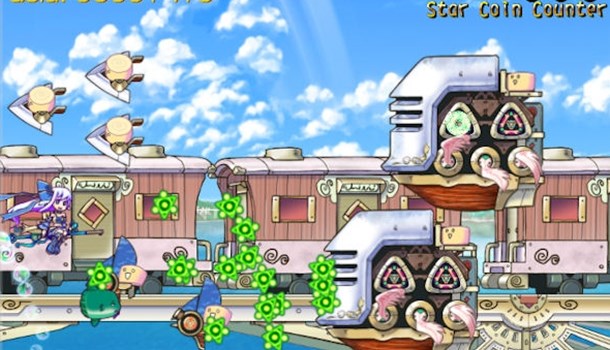 Well, we nearly let this one slip past! Based on the arcade game of the same name, Trouble Witches Neo is the latest cute-em-up from SNK Playmore.

Initially offering 8 witches to choose from (with another available as DLC) TWN is an aggressivley upbeat and cheery shooter which oozes character and charm. Think of it as Deathsmiles without the Goth-Loli overtones and you've pretty much got it.

There are a slew of modes to choose from, with the two main offerings comprising of Arcade  (the original game) and Arrange mode, an exclusive Xbox 360 arrangement with rearranged levels and story-lines for each character, as well as score attack and multiplayer options.

Each witch has their own unique bullet pattern, and a familiar to provide backup. Once selected you must travel through 6 levels of bullet hell and face off against the evil witch known as Amalgam. To get to her, you must first defeat her children -it's a social services nightmare.

Cuter than a bucketful of buttons

The first thing to grab you is how gorgeous and varied everything is - while the game doesn't utilise the full power of the host machine, the bright and cheerful settings are just so damn sweet you could lick the screen (but don't!) The overall feel is very much like Konami's Twinbee, with "too-cute-to-shoot" enemies inducing sympathy when you have to send each one to a sugary grave.

But don't feel sorry for them, because they're evil fiends - the game may look cute but its an unforgiving bitch on later levels. Pity soon turns to righteous fury when the little sods start tearing through your defences and crapping enough pastel-shaded bullets to make even the hardiest witch bite the dust.

Luckily, you're not just throwing out spitballs, and the game's core mechanic is there to get you through.

The Magic Barrier system generates a force-field that slows bullets giving you time to avoid them, but its usage is determined by an energy bar - once it goes, so does your protection, making timing crucial. Another side-effect of this barrier is that any bullets within it can be turned to gold coins if you can kill the sprite that fired them. These can then be collected and taken to... the pumpkin girl's shop!

Why the pumpkin girl? God knows...

The shop floats about on levels at various points in each level - enter and a nervous, pumpkin-hatted girl will attend to your every whim in matters of mass destruction.

Sounds too good to be true? Well, not quite. The game does have some flaws, the most irritating being the truly awful English voice acting. It''s not so-bad-it's-good, it's just bad. Grit your teeth, get through it and think of the bullets.

Translations throughout are similarly ropey, and almost as bad as some of those found on iPhone RPG's. Given that fans of this type of game will be used to importing and dealing with bizarre English anyway, it's not a deal breaker but it does make the game feel a little less polished, and that's a real shame.

In essence, Trouble Witches Neo is a quality Japanese shooter, the likes of which we rarely see in this country. That alone might be reason enough to pick this up, but the depth of the gameplay and abundant extras add meat to the bones of a pretty fine release, and one that has, for reasons unknown, been pretty much neglected.

Get on your broomstick, lay down 800 points and correct this terrible injustice!

9
Translation issues aside, this is a wonderful shooter that's as cute as it is deadly. A killer combination.