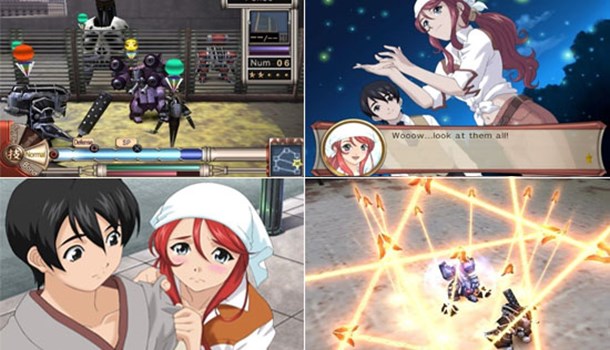 Sakura Wars is one of those franchises that is destined to rarely make it outside of Japan. It is huge in its native country with a library of games, anime, manga and even a maid cafe based upon it. Now the last game in the main series, Sakura Wars V, has been ported to Wii from the PS2 - but does it meet all the hype?

You play as Shinjiro Taiga, a new recruit to the Imperial Assault Force. He has been sent to New York to head up the new Star Division based in the city. Shinjiro’s arrival causes problems as the team is expecting his more experienced uncle (from the first set of games) and from there Shinjiro needs to prove himself a worthy team-player and leader as he takes on the mantle of Captain.

Sakura Wars can be split into two completely different games. The main bulk of the game (especially from the offset) is spent in the Adventure mode. Here the game plays much like the visual novels  that are currently popular. The player needs to follow the story, while at certain times making the correct choice during a conversation, or exploring the environment to find a conversation to partake in. This is carried out through a mixture of 3D (exploring the world) and 2D images(which carry the conversations).
The character designs and environments are beautifully done, with the unique anime style we have all come to love. The characters are believable, if a little clichéd, with the experience being exactly what you expect from a visual novel . Those expecting the Japanese soundtrack however are going to be disappointed, since the disc didn't have the capacity for two language tracks.
Thankfully the voice acting is mostly bearable, though the Texan voice of Gemini Sunrise is enough to make you want to stick Wii Remotes in your ears. At least you have the option to turn off the voice overs completely.

The second half of the game is a pretty standard strategy RPG. The player takes command of the team of robots piloted by the team, each of which has unique abilities. It’s a standard affair where the player must take turns, attack, defend, heal and generally start knocking off the HP until the end of the match. Anyone who has played an SRPG like Disgaea will be right at home here and will be able to pick up the controls quite quickly. There isn’t a huge amount that will be new to players and some may find it on the simplistic side.

As an overall package, Sakura Wars is probably going to be the closest that you will get to playing an interactive anime on a console. (What about Persona 3 - Ed?)

While visual novels are nothing new on PC, for consoles outside of Japan they are a rare thing indeed. There is a mountain of text to climb through, and the investigation across the world map will chew through some time.
The text system works nicely, broken up by branching replies and subsequent story arcs, further enhanced by the ability to vary the strength of your responses through quick time events.

Most of the game seems to be focused in this “adventure” section, so if you go cross-eyed after more than two pages of text, then Sakura Wars will no doubt not be for you.

In terms of presentation, the game looks fantastic, especially the 2D sections. As mentioned before the character designs are lovingly done, with full-motion anime video placed in the more action-oriented scenes which add a huge amount of character to the game. The 3D sections do let the game down, as it becomes very obvious this is actually a five-year old PS2 game. Mecha designs are basic and boring, while the environments where the battles take place are quite bland and lifeless. Boss fights do spice things up a bit, but not enough to turn it into a delectable dish.

The story itself can also be a bit cheesy at times, especially during the combat sections. The Little Lips Theatre in which the team is based acts like Tracy Island, while the characters when in combat seem more like the group out of Gatchaman, complete with cheesy combat dialogue, yelling out attack names and posing after finishing a fight. Even a hardened anime fan will crack under the pressure of the cheese. While it isn’t game breaking, it does dent the game's appeal a little - does anybody in Japan really act like this?

Ironically I would say that the fans of visual novels would get more out of Sakura Wars than the SRPG fans, given the ratio of each element within the game.

Sakura Wars is an interesting experiment to gauge the western reaction to this type of game, but you can see why it failed to make the leap before now - given the Western gamer's penchant for action, Sakura Wars contains a more subtle payoff that many may fail to embrace. Our hats are off to NIS America for letting us taste this unique delicacy; we’re just not too sure we’d order it again.

7
An interesting mix of visual novel and SRPG, but it seems that one side is more catered for than the other.
LATEST REVIEWS
Xenoblade Chronicles 2