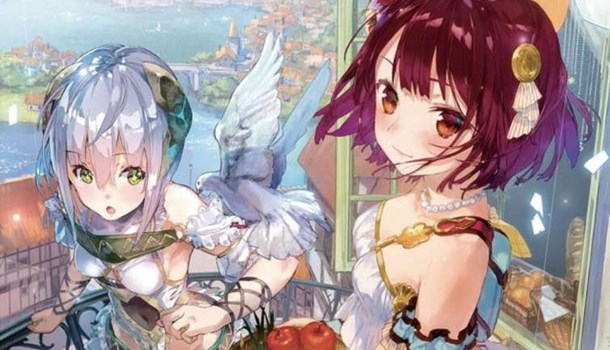 Atelier Sophie: The Alchemist of the Mysterious Book is a turn-based combat RPG and Crafting game. It is the seventeenth game in the Atelier series and the first in the Mysterious storyline. It was produced by Gust and was originally on the PS3 (in Japan only), the PS4, the PS Vita and Microsoft Windows in 2015, and now re-released this year for the PS4, Windows and the Nintendo switch.

Sophie’s Grandmother was a great alchemist and people used to come from far off places to enlist her help, Sophie was training under her when her mentor unfortunately died, leaving Sophie with her shop and very little skill. One day Sophie finds a reference book that belonged to her grandmother and writes a recipe in it, much to her surprise the book wakes up and starts talking to her. The book, named Plachta, could teach Sophie to be a great alchemist, if only it had its memories. They discover that writing alchemy recipes in Plachta helps to recover bits of its memory, so Sophie sets out to collect ingredients, think up new recipes and maybe one day, if she’s lucky, Plachta will remember where to find The Cauldron of Knowledge, or at least how to make one.

This is a game with a lot of characters; Sophie Neuenmuller is the protagonist and the character you'll be playing. Plachta is the talking book and is the driving force of the plot. As the story unfolds you get to know a lot of the residents of Kitchen Bell, the town where Sophie’s atelier is based. At first there are only a few characters, such as Sophie's childhood friends Monkia Ellmenriech and Oskar Behimer who accompany you when leaving Kitchen Bell to find new ideas and ingredients. In town Oskar’s mother, Marguerite Behimer, sells ingredients that will help with Sophie's alchemy, there is also Pamela Ibis who makes and sells talismans at the church and Elise Phulie the bookshop owner who sells paper and books for using in alchemy. Horst Basler runs the local café/bar where you can undertake requests to earn money. As you progress two of Sophie’s friends Logy/Logix and Harol Simens, a blacksmith and gun maker come back to town, and many others will return as well; Julio Sebald Leidenschatt, a travelling knight with an interest in alchemy, dollmaker and former mercenary Fritz, Leon a clothes maker and Corneria, an alchemist with a duplication talent that comes at a high cost.

There is a lot of characters to get to know, and its worth cultivating their friendships because the characters are the heart of this game. If you make friends with them, they may aslo agree to join your party.

The game has a time and day calendar which effects various aspects of the game. Crafting and travelling take time, ingredients are effected by time of day and the weather, both of which also affect the monsters, with tougher beasts venturing out at night. Gameplay is split between turned-based combat and crafting. The turn-based combat is in groups of four and you have two playing styles, offensive and defensive. You can switch offense and fedense between the characters in your group, but having two or more characters in one mode will charge up the Chain Guard meter that helps characters assist each other, by defending characters in defence mode and by using group combos in offense mode. 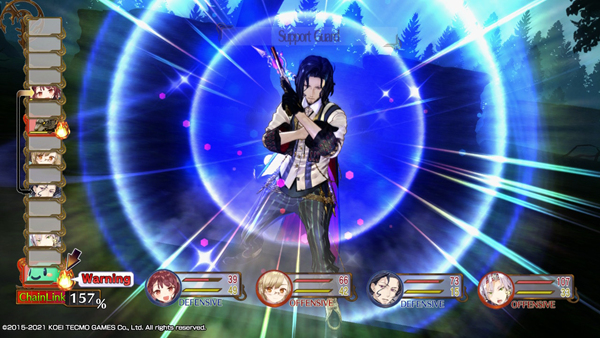 You unlock more combos for the group as the game goes on. You also have to watch your HP, MP and LP, HP and MP are for when you are battling only, HP being your health point and MP being your special attack points, LP is for when you're outside of battle and goes down when you're walking to different map locations, as well as the passage of time generally. If your LP gets too low outside of battle it can effect your HP and MP in combat. You also need to keep an eye on your characters items and clothing, as upgrading these will help improve stats. Each character can also can carry items like potions and bombs - Sophie has a special Explorer Pack that can carry accessories that can change the stats of the party, improve their luck or help find ingredients. And if that sounds complicated that’s because it is.

The crafting element to the game is a lot of fun, when you go to make potions you get a grid to place the ingredients onto, with the grades of the ingredients effecting their shape and how they fit the grid. They are also colour graded and different items will give the grid different colours, and these can effect what bonus the item will come out with as well as the effect the overall grade of the item. It’s a bit like Tetris, having the shapes touch each other and being in a space that is the same colour as the ingredient shape is good, but if they overlap the bottom shape will disappear, which can be bad as the objective is to have as many shining colours in the grid as possible. Overlapping them can cause some of the lights to go out, which will effect the grade of the finished item and what bonus you can give to it. This is a lot less complicated than it sounds! 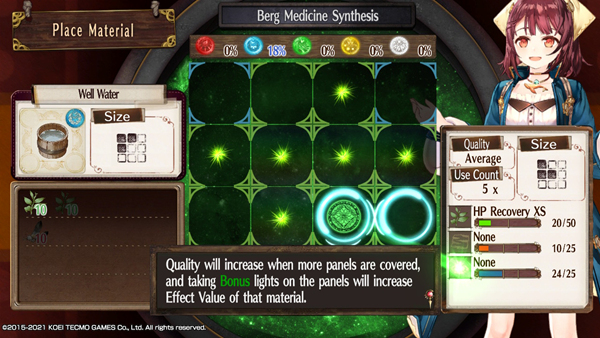 This is a slow-burn game both in the story and gameplay. You'll have to talk to people regularly to access cut scenes where you get to know them, and in doing so your friends may remember a new ingredient location, opening it up on your map. They may even ask you to join in with ingredient hunting, allowing you to add them to your group.

Interestingly, this is a game that starts out hard and gets easier. When you start leaving Kitchen Bell to hunt ingredients you only have three people in your party; Sophie, Monkia and Oskar. Monkia has the best stats, Oskar in the middle and Sophie is just the worst, her attacks barely make dents in monsters, but Sophie is an alchemist, I would advise to fill one of her item slots with healing balm and the rest with bombs, make lots and lots of bombs and give them to Sophie. This will have the double benefit of not having to use Sophie's incredibly pathetic attacks and also aid with increasing your alchemy level, which will become helpful later in the game. After you gain a fourth party member the game becomes much easier, as this extra body allows you to split your team into offensive and defensive positions, which is very useful when fighting tougher enemies. Your combo attacks will also be more effective with the fourth member.

Suffice to say the graphics are not the best, with flat-looking backgrounds next to the 3D characters, which is a quite jarring. The 3D animation is terrible, everyone looks as if they are made from plasticine, the hair being the worst offender in general, though special shout out to Sophie's terrifying mouth flaps, Monkia’s serious case of camel-toe, and poor Horst who looks like he’s escaped from Stepford. This is a real shame because in the second theme song, yes we get two, we get to see the 2D character designs and they are lovely. Although the game is now 6 years old, the assets could have benefitted from some more polish. 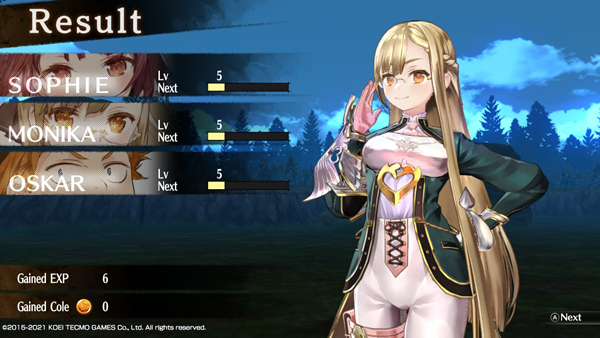 In the game's favour, the voice acting was good and suited the characters. the background music was used well and everyone has their own theme tune so you can get a feel for the characters before they even speak. The only instance making me go "huh?" was the first fight you ever get into, as Monkia yells "be careful!" Mom-arming Oskar and Sophie, the danger music swells and out rolls a blue blob, a blue blob with blush. At first I thought this was meant to be a joke but the rest of the scene was played completely straight. 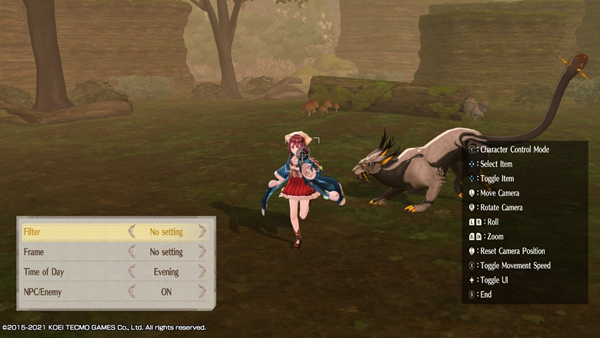 Yep, that's what I want - a photo of me bravely fleeing!

My only other complaints (apart from the 3D animation) are about the about the camera. Firstly, you have to move the camera manually, which can leave you with a blind spot, and monsters will take advantage of that. Secondly, and this will only apply to Switch users, is that the camera mode on the switch is located in the middle of the joystick. So you’ve stopped to pick up an ingredient, the camera has decided to focus on some random part of the area, you stop to fix it so you can see to the sides and BAM! A high-level monster has snuck up behind you. It's easy to then accidentally tap the middle of your joystick when trying to run, which sends you to camera mode which you have to navigate out of - this is just so very irritating, and completely avoidable. My Time in Portia also has a camera mode, but accessed by the ZR  button, so you can’t accidently hit it and can run away from as many monsters as you like. Why Atelier Sophie placed this feature in such an inconvenient and frustrating spot is beyond me.

Niggles to one side then...

Despite minor frustrations, overall I enjoyed this game immensely. The plot was engaging, the characters are relatable/likeable and you really feel that the older people in the town care about Sophie and have been watching over her after her grandmother passed. The game mechanics can take a while to fully understand but once you get the hang of them you can have hours of fun either taking your friends out to try new battle combos or messing around with the Tetris cauldron to see what different effects and bonuses you can give different items.

Overall it's a wonderful world to get lost in.

9
Camera troubles and creepy animation aside, this is a great game that engages the player and has a satisfying story.
LATEST REVIEWS