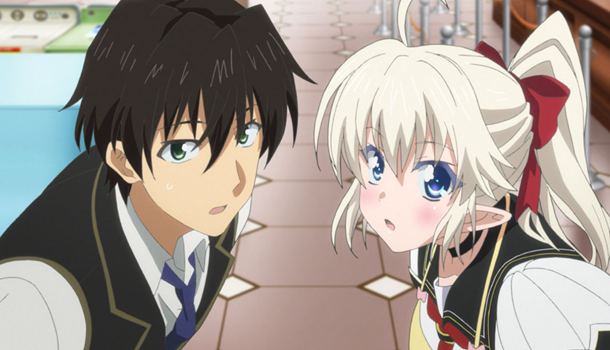 Retraining after you have completed a military career is a difficult task. Going from a regimented lifestyle where you are told what to do for 12–16 hours a day, into “Civvie Street” where your life is yours to make the most of (or ruin) is one of the hardest professional transitions anywhere and it regularly responsible for a great amount of mental hardship, substance abuse and homelessness. It is quite a serious problem and I could go on about how the UK is not doing enough to help… but… instead I shall use this as a reason why Yusibu (Yuusha ni Narenakatta Ore wa Shibushibu Shuushoku wo Ketsui Shimashita), is a bit of a special anime, and not just because it has a long name!

The basic premise of Yusibu is that of retirement. Raul Chaser used to be a hero in training. He and his troop at the training school were very good at the slaying, flaying, killing and maiming of the demonic types and they dreamt of one day meeting the Demon King and slaying them. Unfortunately, the Demon King was slain and there was no longer need for a training school, or heroes and after years in the boot camp equivalent, Raul and his friends were out of the job and back on Civvie Street. Like most people who are in need of retraining, Raul becomes a clerk in a magical electrical appliance store (That's always been my fall-back job - Ed), the Magic Shop Leon and becomes another wage slave.

After getting used to the job, making new friends and becoming properly established, Raul is introduced to a new hire in the shop. What he thought was just a short bloke, turned out to be a rather mischievous girl by the name of Fino Bloodstone. Though, she isn’t a normal girl. First of all, she has rather pointy ears, a tendency towards the macabre, oh, and she is the daughter of the deceased Demon King. Raul and Fino quickly become friends and soon Raul’s rather mundane life, becomes a lot livelier.

It all seems simple enough, a slice-of-life show set in a magical electronics store in a fantasy world, and I would hope that there was something more interesting about the world… but… there really isn’t. And given it’s a show with only one actual male character and lots of female characters, you would expect the character design to actually be half reasonable and the animation fluid. It isn’t. Heck, given it’s a slice-of-life/harem style anime, you would expect the fanservice to at least be stimulating. Sorry. It isn’t. I watched this anime with two of my friends, both of whom are not strangers to fan service. Both are fans of series such as Highschool DxD, both enjoyed Testament of Sister New Devil, but the general opinion of Yusibu was… “this is trash”.

So, lets objectively assess this series.

Firstly, the animation quality and character design. I need to say this right off the bat. Tits don’t work like that. If you have a loose item of clothing, it won’t stick to the entire curvature of the breast. Secondly, if you are going to animate jiggle physics, please learn how gravity and momentum work. I am quite shocked that none of the girls poked their eyes out on this show! Then there was the very low frame rate and the poor animation in key action scenes where faces contorted, arms looked disjointed and scenes broke up. So, Yusibu is not really well animated.

So how about the voice acting and dubbing? This release only has a Japanese dub and English subtitle track, the dub seemed to be highly generic, the acting wasn’t memorable, and then half way through, an actor came onto the scene who sounded like a gerbil huffing helium. I wanted an English dub as even a gag dub might have made me smile a bit. Alas, not this time. The writing wasn’t any better, though at least the lines and acting for Fino were fun. When she was learning how to greet people in the store and not kill them, the puns were beautiful but this was a rarity. The rest of the writing and the story wasn’t exactly memorable either.

I suppose what I am trying to get at is this. The premise of the story could have been quite serious and if played slightly differently with a properly planned story, with improved animation, with much better acting, with well-designed characters, Yusibu might have been good. Alas, unfortunately it has joined that collection of anime series which are consigned to the shelf out of sight and out of mind. I know Yusibu has its fans, but unfortunately, I am not one of them.

5
Yusibu is a bit of a let-down. Perhaps Raul should have stayed a hero.