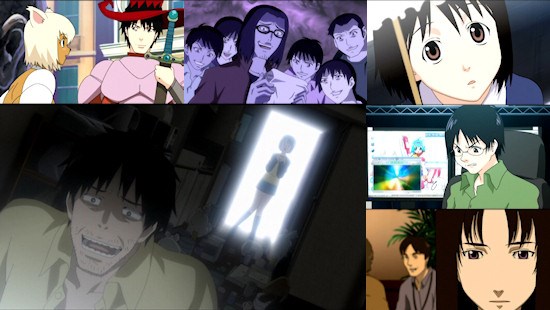 Welcome to the NHK

Let's not mince words here - Welcome to the NHK's protagonist Tatsuhiro Sato is a hikikomori - a shut-in, recluse, college drop-out and general reject of society.  But is it really Sato's fault?  Not so according to his inner thought processes - the truth as he sees it is that he's at the centre of an enormous conspiracy perpetrated at the highest levels of Japanese society to ensure that he, and others like him, are unable to break out of their shells and find a place in the world.

Despite this idea floating around within his mind, Sato is still a young man looking for a saviour, and he might just have found one as his messy apartment is visited by a woman from a local church handing out leaflets about the hikikomori scourge.  Never mind this old lady however, as it's the girl accompanying her that could be Sato's ticket to normality - a mysterious girl named Misaki Nakahara who later promises to cure her charge of his hikikomori ways, even drawing up a contract in that regard.  Is Misaki really the key to Sato's rehabilitation? What of the other former friends and schoolmates with which he comes into contact?  Whether Sato discovers the way out of his seclusion or finds himself mired even deeper in conspiracy, his journey through the trials and tribulations of life is certain to be a difficult and sometimes painful one.

Based on a novel turned manga by Tatsuhiko Takimoto, Welcome to the NHK isn't so much a dark comedy as one so pitch black that it should probably be bundled with a torch - it's a series that has no qualms about delving into the darker problems that can afflict a person's life whether it's more mundane troubles like romance or money or tougher issues like suicide and, of course, shut-ins or so-called hikikomori.  Although it should be tough to wring comedy out of such troubling social issues, Welcome to the NHK somehow manages it with aplomb more often than not largely on account of its cast of characters.  Leading the way here is main character Sato - a horrible and naive person on the surface, but also an utterly human one who you still find yourself warming to despite all his glaring flaws as a softer side emerges beneath all of the protective layers he has built up atop his personality.  This is a facet that's true to all of the characters within the show - Misaki's facade as a smart, confident saviour for Sato is just that, while Sato's friends Yamazaki and Kashiwa are both talented, decent people lost in a world where their positive points are simply looked over.

While walking this tightrope between love and hatred of its major players, Welcome to the NHK manages to pull off a similar trick of acrobatics with its plots and scenarios - from suicide meetings through to pyramid marketing schemes, the series insists upon wringing every last drop of each setup, making many of them rather overblown affairs that just about manage to remain grounded thanks to those aforementioned characters and others around them while any more outlandish moments work purely as comedy to take the sting out of any disbelief they might otherwise muster.

Dig beyond that comedy - and there's plenty of it here, from good old-fashioned romantic comedy through to efforts aimed more squarely at the otaku crowd, such as a hilarious attempt to create the perfect girl for an adult visual novel - carefully enough however, and Welcome to the NHK is no mere comedy series alone, bringing with it a hefty dose of social commentary to boot.  As well as simply raising some otherwise difficult issues and bringing them to light, the show asks some big social questions during the course of the series - is Japanese society really "conspiring" against its youth to leave them jobless and without hope or motivation for the future, or are we simply looking at a generation more eager to make excuses for their own situations to shift the blame away from their own poor attitude towards work and society?  These are big questions that reverberate far beyond Japan itself, and it isn't very often that an anime series is capable of acting as a springboard for such after-dinner discussions.

The good news is that, if all of this talk of socio-political discussion is off-putting, Welcome to the NHK is a series capable of working on multiple levels.  From one perspective it's a razor-sharp commentary on otaku culture, from another it's a pure and almost slapstick black comedy, and from yet another point of view it's a good old-fashioned romantic comedy.  Blend those perspectives together and match it up with a wonderfully melancholy soundtrack and you have yourself a series that stands out as unique amongst its peers, and even since its 2006 Japanese broadcast nothing has come close to even imitating what this series tries to do, making it very much a seminal and must-watch show for that reason alone.

It has to be mentioned briefly that Welcome to the NHK isn't flawless - its ending strikes out in a different direction to the manga, arguably to its detriment, while animation quality varies from average to decidedly ropey, even if its scruffy but fluid style occasionally actually suits the show rather well.  As far as its UK release is concerned, MVM Entertainment's effort here is passable - the series is split across four discs with decent enough audio and video quality aside from a few scenes where we noted a slight "flickering" effect across the screen, and with good subtitles aside from very occasional minor errors.

Although it's taken rather a long time to reach the UK thanks to the demise of ADV Films and the like, it's very much a case of better late than never for Welcome to the NHK - its unique nature means that its aged well over the past few years, and if anything the current anime output filled with idealistic portrayals of life only serves to make what it tries to do all the more powerful.  If you're looking for something a little darker and off the beaten track than the norm to kick off the year, then you won't find much better than Welcome to the NHK whether it's comedy or social commentary you're looking for.

8
Black comedy, romance and social commentary might not usually make for good bedfellows, but it's a combination that works perfectly within the confines of the excellent delivery of this series.
LATEST REVIEWS