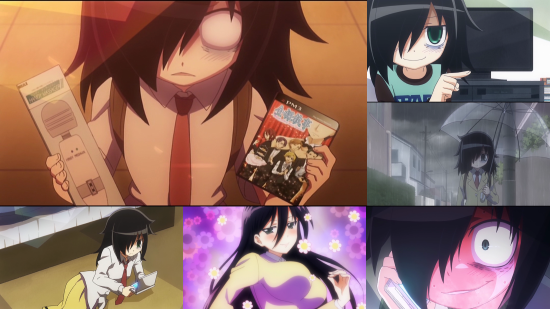 Humans are social creatures - we evolved to work in groups, socialising and working together to progress our society. However, as we have progressed (and I would argue with the dawn of the Age of Information), we are losing our social fabric and loneliness is becoming pandemic in nature. Loneliness is an absolute bitch, and heaven knows it’s hard enough to defeat, even with good friends. I am introducing this as loneliness and the need to be social and have social contact is the key theme of Watamote - however, the way our reclusive female protagonist handles herself leaves much to be desired, and her ongoing failure is what makes this anime more tragic than funny in my opinion.

Watamote, aka “Watashi ga Motenai no wa dō Kangaetemo Omaera ga Warui!” (or "No Matter How I Look At It, It's You Guys' Fault I'm Not Popular!" in English) to give it its full title, is the story of Tomoko Kuroki and her ongoing attempts to gain popularity in the jungle that is high school. There are just a few issues with this grand plan of hers, namely:

Watamote focuses on the various nefarious schemes that Tomoko devises to improve her standing within the school which, after her first three months, stands at a dead zero. There is a cause for this of course. If you want to be ignored in any community do the following: say nothing, do nothing and do not contribute. This is exactly what Tomoko has done, isolating herself in her own little bubble of solitude, her happy place. But in order to gain popularity and live the exciting high school life she idolises thanks to her obsession with light novels, anime and dating sims, she needs to open up, socialise and be with people. Thus begins her spiral into denial, depression and self-loathing.

I liken Tomoko to the “Smelly old woman in the cave” from Douglas Adams’ Mostly Harmless. This old woman has a singular piece of advice as she photocopied her biography and catalogue of all her life’s decisions, and that was if you want to live a happy life, don’t do anything that she has done. I mention this as during my watching of Watamote, this is what I felt as Tomoko repeatedly failed in more and more excruciating and amusing ways. This, ladies and gentlemen, is what true schadenfreude is. For example this is what you should not do for a successful teenage life:

This list is just the start, but I think the most frustrating element of watching Tomoko is her repeated mistakes and her lack of reflection - she continues to listen to this little voice inside her head rather than just consider other people’s feelings. I do wonder, especially watching her relationship with her brother Tomoki, whether her middle school life was touched by an event which traumatised her towards human contact. The anime touches a little on the history of her relationship with her brother, showing their past amicability and love, but unfortunately does not delve any deeper as to why the relationship soured. This, to me, is tragic. Tomoko is horrible to her family, while they do their best to support her up until the point that they eventually snap.

I know this all sounds depressing, and I suppose in a way her situation is, but in reality Watamote is what I would class as being more of a tragicomedy. The series heavily relies on situational and slapstick comedy, delivering many laughs out loud moments punctuated with many more moments where you are left with an urge to plant your palm to your face and shout at the television. The sheer fact that you get drawn into her character so much is a testament to the quality of the writing and character development. This is best demonstrated I think with the variety that the Japanese voice actress shows in the part of Tomoko. Izumi Kitta delivers a wonderful performance which brings out the sadness and sadism of the character and is superior to the English performance by Monika Rial, which can only be described as audio sadism. Don’t even consider the English dub, it’s terrible and loses much of the emotion of the Japanese performance.

Watamote is enjoyable, I cannot deny that. The first disc was enjoyed under the influence of alcohol and with company. We laughed together at her mistakes and failures. When I was sober and alone the following day, the tragedy of her life, her situation and her failings hit me. I wondered what had caused this person to change. I was staggered by her blindness to see her own failings while continually criticising others and I was saddened to see that she didn’t learn. It hurt and unfortunately brought back a lot of my own issues to the surface. Nethertheless, Watamote was highly entertaining and a series I recommend, though maybe only with company.

7
A tragicomedy best enjoyed with friends.